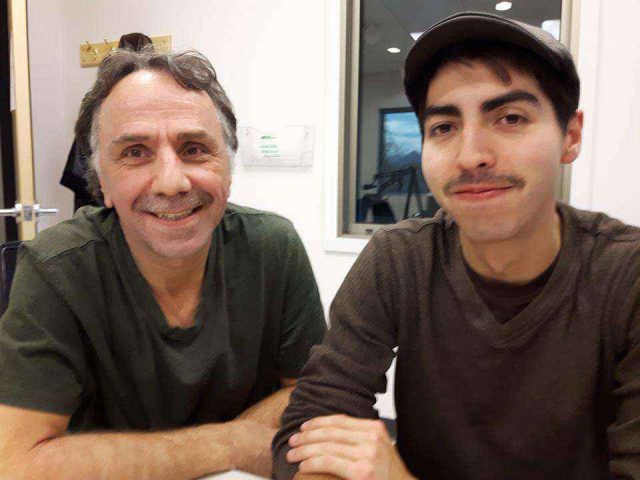 K103 radio hosts Jake Lawrence and Dennen Phillips will spend the months watching the sparse whiskers above their upper lips hopefully sprout into quality crop dusters for a cause. (Courtesy Dennen Phillips)

The modern moustache comes in many forms and is grown for many reasons; style, warmth, desire to look as much like Chicago Blackhawks coach Joel Quenneville as possible.

No reason, however, is nobler than the men of Movember who sprout dirt squirrels to raise money and awareness of men’s health issues, including colon cancer.

K103 Radio’s “The Big D” hosts Dennen Phillips and Jake Lawrence decided to go the way of Selleck, Trebek and the late Jack Layton and sprout nose neighbours for Movember and raise awareness for colon cancer.

“I have in the past seen people do the Ice Bucket Challenge, walks for cancer, etc., and rarely got involved, whether it be lack of time or money,” said Lawrence.

“Last year, I was made aware of Movember. Now there is something I can get involved in and since I work in radio, I can really get the word out there about prostate cancer, testicular cancer and mental health and suicide prevention.”

The two men have been speaking about cancer awareness on the radio since October, which was Breast Cancer Awareness Month, and are asking those who wish to donate to give a general donation to the Movember Foundation.

The Movember Foundation works to fund programs across the globe to fight prostate and testicular cancer, suicide and mental health for men.

According to the foundation’s website, one in eight men will be diagnosed with prostate cancer and an average of 11 men die from the disease every day. Testicular cancer is the most common cancer in Canadian men from 15-29. In addition, one in 10 men in the country experience major depression and an average of eight men each day take their life through suicide.

Of course, there’s a secondary bonus to Movember that Phillips is excited about.

He may have a ways to go including a white dye job to pull off the Pai Mei.

“I’ve never gone over three days without shaving, so things are getting pretty out of hand,” said Phillips. “I wanted to get rid of it two days in, but I’m doing it for a good cause. It’s a challenge of endurance these days.”

Of course the challenge of prostate cancer is longer and harder journey than sprouting a mouth mirken for a month, and it’s something the men both know full well.

“I am lucky that my health is good, but I am at an age that prostate cancer is a real concern, so why not help raise money and awareness?” said Lawrence, whose soup strainer icon was once Selleck (naturally), but has evolved to Chuck Norris even though Norris generally “sports a beard.”

There is one thing Lawrence (and all men really) is always careful to avoid while trimming, brushing and perhaps waxing his “old bullet proof.”