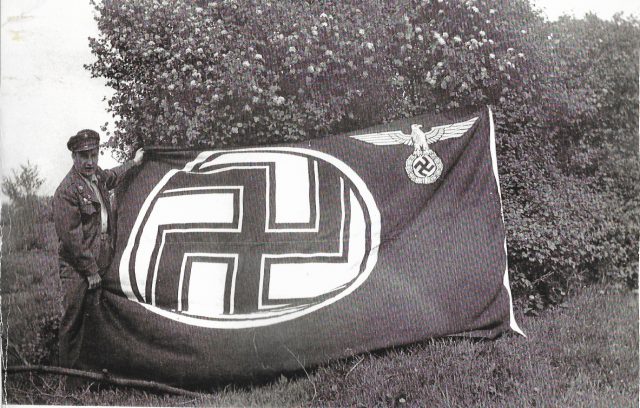 Michael Delisle Sr. was part of the force that liberated one of the darkest locations in the Second World War, and he took a souvenir home with him that eventually wound up ashes. (Courtesy Mike Delisle)

It is a flag as recognizable as any of its kind in modern history. The sinister alteration of the swastika in black surrounded by red and white was once flown in the thousands in the nation of Germany, and across Europe, as the Nazi war machine sought territory through occupation.

Mike Delisle Sr., an ironworker from Kahnawake, took one such flag home after Germany’s demise, and the flag’s end had an eerie similarity to the end of the government that commissioned its construction.

Mike Delisle Sr., the son of Louise Canadian Delisle, enlisted in the US army and fought in the Second World War. He stormed the beaches of Normandy, fought in the Battle of the Bulge and was part of the force that liberated the Dachau Concentration Camp on April 29, 1945.

He left with a souvenir.

“He was part of the people that helped liberate the camp at one point, and somehow commandeered that flag and actually brought it home,” said his son Mike Delisle Jr.

After being discharged, Delisle Sr. was given an American flag that he folded and placed in a box atop the Nazi flag. It was in the cardboard box that the flag met its end.

“When the house burnt, we went through stuff to see if we could find anything,” said Delisle Jr. “Not one remnant of that (Nazi flag), but we actually found the American flag. You couldn’t open it because it was all cracked and charred, but pretty freaky. Didn’t see any remnants of it and they were in the same box.”

The flag, it seems, found its way to ash much like the fuhrer Adolf Hitler did after committing suicide along with his wife Eva Braun April 30, 1945. Hitler was brought outside of his bunker and burnt.

Before its end to flames, Delisle Sr. brought the flag out in certain situations for a particular purpose.

“He used to put it in front of the door during Christmas and New Year’s when people used to go around from door-to-door, and people would show up from the Legion, you’d wipe your feet on it as you walked in,” said Delisle Jr.

It used to make another appearance that the veteran may not have approved of when Delisle Sr. was away working in New York.

“My mom used to hang it on the line once a year, much to my sister’s chagrin, to air it out,” said Delisle Jr. “She’d say, “ma! What are you doing flying a Nazi flag in the backyard?”

At the end of the war, Delisle Sr. returned home to Brooklyn and raised a family with his wife Grace working as an ironworker. Delisle Jr. came along late in life and was born in 1964, after his sisters Valerie and Marsha.

Though the war was long over by the time he was born, Delisle Jr. said its impact never left his father.

Delisle Jr. thought of joining the forces at one time, but was dissuaded by his father.

“He said, ‘don’t do it,’” said Delisle Jr., who grew up with no firearms in the house, a tradition he has continued.

“He didn’t make me fearful of guns, but he made me think that they don’t play a good role in our society. I never owned a gun, I never will, and I’m not a hunter maybe because of some of that.”

“He watched the beginning of Saving Private Ryan, and couldn’t watch the rest,” said Delisle Jr. “He said it wasn’t a true depiction, but the look in his face said it was probably too close to true depiction… I always remember whenever Patton came on, he’d spit at the TV, and he served under him. He hated him.”

Delisle Sr. died in October 2006; taking the demons that haunted him from the bloody war with him.

“His younger sister (Hazel) said, ‘my brother went to war, and he never came back. He wasn’t the same person,’” said Delisle Jr.