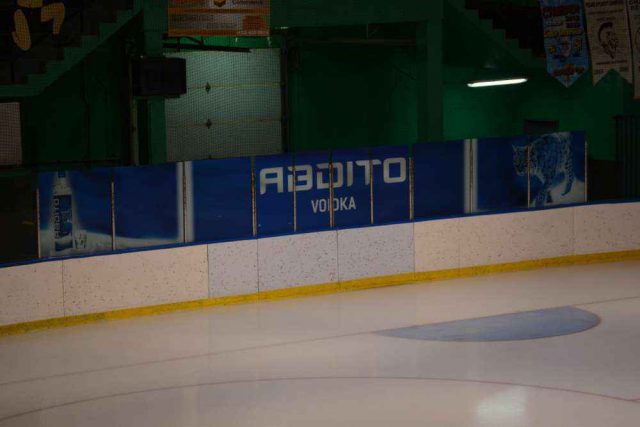 Abdito Vodka had its plans for a large-scale billboard and the Kahnawake Sports Complex come to a premature end, as the locally-produced alcoholic drink’s sign caused immediate protest in the community. (Daniel J. Rowe, The Eastern Door )

Kahnawake Sports Complex managers Kenny Kane and Frank “Putsky” Rice knew as soon as they saw the Abdito Vodka billboard go up that it was going to get attention, and not necessarily the type the owners of the local company wanted.

“When we heard about it, Putsky and I were sitting right here, Lois (Williams) came in and said I have a deal with Lee Thompson for a lot of money for the year, what you see there,” said Kane Monday morning, when the sign was still up.

“I said, ‘I’m telling you right now, I’ve been here 30 years, I know how Kahnawake works, I know how it thinks, especially with things like that involving children in the same facility.’”

After some discussion, the sign that spanned the entire length of the boards under the scoreboard went up last Friday.

“I said, ‘I’m telling you. There’s going to be a big controversy. You may have to take it down,’” said Kane.

The Eastern Door obtained two letters of complaint from community members Alex McComber and Lynne Norton that objected to advertisements for alcohol being put up in a facility that many youth utilize.

“The goal of advertising is to get customers to buy the product and the main audience at the Sports Complex are children and youth,” reads McComber’s letter. “The message will be received over and over.”

Norton told The Eastern Door that she has nothing against Abdito owner Lee Thompson or other advertisements for the product, but was upset at the location of the sign.

“When (a photo of) that sign was sent to me I was in total shock,” said Norton. “When I saw it, I was totally sickened by it. I thought of all these kids who struggle every day with alcohol problems in their families. I thought of the kids. I thought this being in their face until they cave and try what vodka is.”

She posted a picture of the sign on Facebook and then wrote her letter to the Mohawk Council of Kahnawake.

“I, as well as my kids and grandkids are in that arena all year round,” said Norton. “So many families do the same thing. We meet up all year. It’s for families. We are proud to have an arena that does not sell alcohol. When you advertise, you are targeting an audience.”

Council chief Carl Horn said the decision was “an operational decision to put up the sign” in the arena that is always looking for funds.

Horn said once council became aware of the controversy, the sign was removed.

“At our next council meeting a clear directive will be established to ensure this does not happen again,” said Horn.