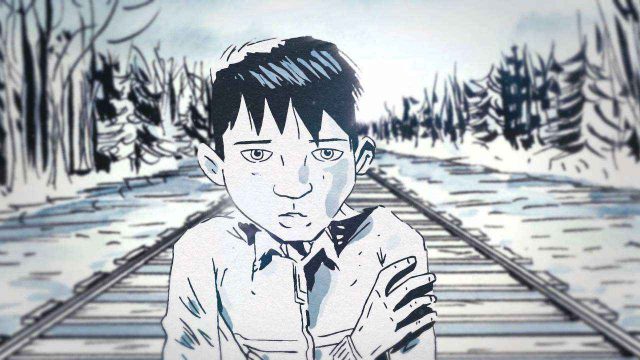 Chanie Wenjack’s sad final journey along the tracks in tragic animated beauty is a testament to Gord Downie’s talent and Canada’s shame at the same paradoxic time.

“This is the best thing I’ve ever done,” says Tragically Hip front man Gord Downie. “And by best I just mean it helps my heart a little bit. This is what I want to do. Nothing else really matters to me.”

The line comes from the documentary accompanying the animated music video of Secret Path, the multimedia project led by Downie. In addition to the video, posted at the bottom of this article, the project includes a graphic novel illustrated by Jeff Lemire that can be purchased solo (Simon & Schuster $26.99) or in a deluxe edition boxed set with a 180-gram vinyl record, digital album download and set of lyric posters ($49.87).

The project, which may well be Downie’s last as he has inoperable brain cancer, tells the story of Chanie “Charlie” Wenjack, and his attempted journey home from the Cecilia Jeffrey Indian Residential School. The journey ended October 22, 1966 when Chanie froze to death, alone, along a railroad track that he thought would lead him home.

“I wanted to tell my brother’s story,” says Chanie’s sister Pearl Wenjack in the documentary. “I wanted his life to mean
something.”

Chanie’s story has now been told three times; first by Maclean’s magazine reporter Ian Adams in January 1967, then by Joseph Boyden in his novella Wenjack, and also by Downie. “Who would have ever thought? The Tragically Hip,” Pearl says with a smile.

Secret Path is an impressive and powerful production that tells Chanie’s story uniquely, while making a scathing commentary on Canada’s residential school policy and negative attitudes of Onkwehón:we people.

“I am a stranger,” the first song begins, as images of a young boy walking on a cold railroad followed by a raven roll. “You can’t see me.”

Lemire’s animation is haunting and powerful, and pairs perfectly with Downie’s poetry.

“My daddy’s not a wild man,” he sings, as Chanie recalls his childhood at the Ojibway community of Ogoki Post, over 600 kilometres from the school.

Peppered throughout the scenes of Chanie slowly freezing to death on his path home are those of what he was running away from.

Hair falls to the floor, as Chanie, cold and wrapped in a blanket, is taken into the care of the sisters who run the school, and altered to look more in the image of what residential school administrators thought was appropriate.

It is jarring enough to read or write about residential schools, and the abuse within, but to see it accompanied by Downie’s haunting and iconic voice is indeed a punch in the stomach.

While watching the video, I rarely stirred or got distracted. It’s beautifully illustrated, and the music is as good as anything in the Tragically Hip’s canon of memorable tunes.

The song “Seven Matches” was so damn sad I almost couldn’t watch. Chanie’s body was found with a glass jar containing a half dozen wooden matches. The song raises hope at the thought of the matches being able to provide light and warmth, as Chanie continues on the railroad tracks towards his home.

We know how this ends, and watching the young boy hold onto hope in a jar is particularly heartbreaking.

Another high point of creativity in the film is during “I Will Not Be Struck,” where the written language changes from English to Ojibway, as Chanie’s mind drifts back to classes where teachers were tasked with eliminating his language.

Downie’s first-person songwriting is effective throughout, and particularly when the words are simple.

“There’s never been a colder rain than this one I’m in,” sings Downie. “It’s not my jean jacket. It’s just a wind breaker.”

As the winter rain pelts Chanie, he pulls his coat closer, and his frustration at something so simple as not having a proper winter jacket speaks so much further to the grave crime that was residential school.

Cut to “Don’t let this touch you,” a song that plays, as a picture of a residential school with Canadian flag blowing proudly in front of it is on the screen, and the reality of how horrible the place was is very real.

The words become more ominous as the scared boy pulls the blankets to his eyes, while a predatory priest paces the room, leaving no uncertainty about the suggestion.

In the end, Chanie (Downie) sings “The Only Place to Be,” and we finally have our hearts broken.

It’s just so damn sad, it hurts to hear.

The documentary following the animated film, directed by Gordon’s brother Mike, features Pearl and the Wenjack family speaking with Downie about her brother and how he didn’t want to leave his home.

Pearl’s hope is that all communities have a high school on territory so “no children have to leave” before they are old enough to choose to.

The project is an impressive success, and, should it be Downie’s last, cements the musician’s legacy in Canadian history by highlighting the same history’s darkness.