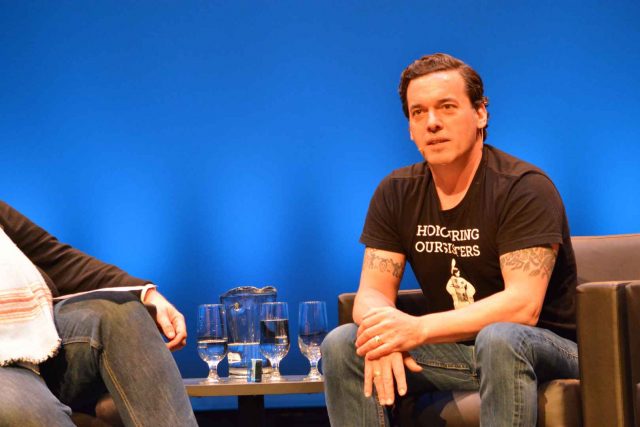 It is a name the entire country should now know, though few knew the boy during his 12 short years.

His story was originally told by McLean’s magazine in a cover story by Ian Adams from 1967, after he ran away from the Cecilia Jeffrey Indian Residential School and died in the cold northern Ontario winter October 22 – 50 years ago.

Wenjack’s story is the inspiration behind Tragically Hip front man Gord Downie’s Secret Path graphic novel, album and short film, and Adams’ cover story prompted a public inquiry into the boy’s death that in the end questioned the philosophy and morality of the residential school policy.

The 97-page story with illustrations by celebrated Cree/Irish artist Kent Monkman follows Chanie through the cold forest while empathetic yet indifferent nature watches.

The Manitous, spirits of the forest, come in the form of spider, pike, goose, lynx, and other animals, who watch Chanie as he struggles in the cold, holding fast to memories and images from his home, as the elements slowly take his life.

The animals and boy take turns narrating the story, creating a landscape where man (boy) and nature are fused in antagonism to the government’s education policy that caused Chanie to try the over 600-km trek to his Ojibway community of Ogoki Post. “He travels most of the day as we gorge just a little on his blood with our tiny fangs’ pierce, and when he reaches the place where the path divides, he steels himself and hurries along the lake as best he can, reaching the uncle’s cabin by mid-afternoon. But no one is there,” Boyden writes as wood tick.

“Chanie sits on the stoop and waits, staring out at the lake, an east wind rippling it, the wind cold. Weather will change, and it won’t be good.”

The foreboding doom that awaits the young boy is chilling from the opening page. The reader should know how the story ends, but miserable hope guides us on, as we see glimmers of a chance that he might just make it home. It’s a huge success to cause readers to hope against what they already know is going to happen.

Throughout the journey Chanie gives glimpses of what he is running away from.

“The slap of amik (beaver) tail is the slap of teacher across my face,” Boyden writes. “The other children stare at me. I spoke out loud in the class in my tongue because I forgot what Nindede (father) warned me.”

He said in a Globe and Mail interview that it’s some of the strongest writing he has ever done, which is saying a lot, and absolutely true.

From line one, the story takes hold, and doesn’t let go.

“Gimik-wenden-ina? Do you remember? I remember, me.”

Much like The Education of Augie Merasty: a Residential School Memoir (an equally short but powerful read), Wenjack tells the story succinctly avoiding many traps stories of this nature fall into.

Neither book forces melodrama or use gratuitous imagery, but succeed in giving a clear picture of a residential school student’s fear and pain at being taken from home and put in a dangerous and abusive situation.

Both are short, but huge, and are must-reads.