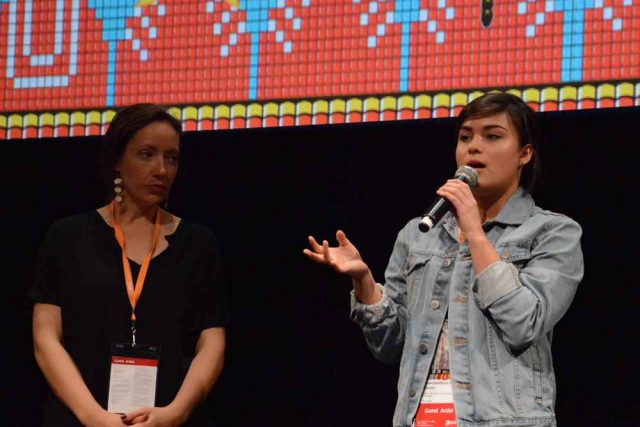 Kawennáhere Devery Jacobs and director Kirsten Carthew field a Q&A after the screening of their film The Sun at Midnight at the TIFF Bell Lightbox Theatre. (Daniel J. Rowe, The Eastern Door)

From the island nation of the Maori to the polar ice cap of Turtle Island to the streets of Akwesasne to Greenland and back, the imagineNATIVE Film and Media Arts Festival was a truly global experience.

Maori artists Dan Mace and Rona Ngahuia Osborne presented the video installation piece Wairua at A Space Gallery as part of the festival’s art crawl Friday night, and spoke about crossing the ocean to take part.

“It’s really humbling to have come halfway around the world and to have been invited,” said Mace. “It’s a big deal for us.”

The couple spoke about viewing some of the films, and meeting Onkwehón:we artists involve in telling their unique and vibrant stories.

“It’s really cool to meet other Indigenous artists who are facing what look like very similar kinds of issues, even though we’re in completely different worlds,” said Osborne.

The wheturang section features seven screens with their elder daughter drawing viewers to the constellations, and seven stars that are sacred to the Māori.

The couple, like all who attended imagineNATIVE, got the chance to travel the world through art that included Kanienkehá:ka productions such as Kawennáhere Devery Jacobs’ short film STOLEN that premiered at the festival and starred Teioshontathe McGregor and Kakwité:ne Jacobs (Kawennáhere’s 14-year-old sister).

“It was my first time going to imagineNATIVE, and it just blew my mind realizing how many great Native films there were,” said Kakwité:ne. “It was my third time watching STOLEN, and I think seeing it in a theatre with all those people watching just made me a bit nervous. Seeing myself onscreen was kind of weird too.”

Kawennáhere also starred in The Sun at Midnight, the first-ever feature film set and shot on location in the North West Territories directed by Kirsten Carthew, and The Land of Rock and Gold. She was part of the 51 percent of the festival’s female directors in the 108 film projects.

Another promising Kanienkehá:ka female talent at the festival was Katsitsionni Fox’s, who directed Ohero:kon – Under the Husk, a short documentary about two childhood friends’ journey into womanhood, which premiered Thursday with a healthy crew from Akwesasne in the house to view it.

“We had a whole busload of people from Akwesasne that wend up for the premiere, and we also had some youth from Six Nations that are involved in their rights of passage that came for the opening as well,” said Fox.

The good day turned to a great weekend Saturday when Fox won the Jane Glassco Award for Emerging Talent for her film.

“I was totally shocked,” she said. “I was not expecting an award. This was my very first screening at a film festival.”

It’s not the first time for Fox at imagineNATIVE, and she spoke of the festival’s importance.

“I love imagineNATIVE,” she said. “I like seeing the diversity of Indigenous people around the world, and there’s such a gamut of things to see.”

Being from an Indigenous community can be isolating at times for an artist, and Mace spoke about the joy of getting out of his world, and sharing his work with others.

“The shared Indigenous experience has been really eye-opening for us because we live in a tiny little corner of the universe a long way from everybody else and we sort of tend to be kind of insular and up our own backsides, I guess, and think about us as having a completely unique view of the world,” said Mace.

“It was fantastic,” said Deer. “I had four emerging filmmakers who all had films in the festival – super talented and very bright.”

Helping the next generation of Indigenous filmmakers was something Deer jumped at being a part of.

“I was there once too, so that’s why I was really keen to participate and be a part of this and give back because it’s important to have mentors, and to have people to tell you what to do,” said Deer.

“There’s no manual, there’s no university degree to become a director. It’s difficult when you don’t know how it works, so I was happy to provide that.”

Deer had a busy weekend and also presented the Directors Guild of Canada outstanding director award to Paul Gross for Hyena Road.

The local director/producer Deer continues to work with the directors’ guild to improve gender parity in the industry.

“It’s a big thing now to get gender parity happening in the industry because I believe the statistics are 85 percent of all directors are still male,” said Deer.

Deer is also on the board of Women in View, an organization that works to increase the number of Canadian women directing scripted TV.

“I feel really great that I’m at a level in my career where I actually have something really meaningful to say on what we can do to change things,” she said. “I feel like I’m part of the bigger conversation and that’s really great.”

The festival took place in the heart of Toronto and gave the city’s residents a chance to see something they may not have otherwise been able to.

“In a city saturated with media, art and culture, imagineNATIVE stood out as a festival that showcased the diversity of Indigenous arts and the complexity of the stories that exist in Indigenous communities across the globe,” said Devin Wells, who lives in the city.

“While a cultural commonality exists within the works, I was struck by how many different representations could be found in each of the richly composed media works and in the narrative of film from all over the country.”

Being a Canadian originally from the west, Wells hopes work such as those at imagineNATIVE can become more prevalent in the mainstream Canadian art world.

“Though uniquely Native in their context, there was a relatable sense that these stories are in fact “Indigenous” to us all, and help to shape and define Canadian culture in more ways than we are always aware,” he said.