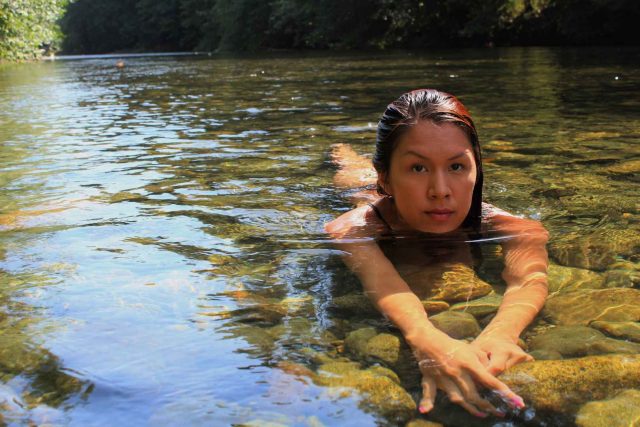 In Defiance opened earlier this month at the University of Victoria Legacy Art Galleries and features over two dozen portraits of Indigenous women.

“This body of work has been on my mind for five to six years. When you have a vision and message, it takes a long time to really get it to this stage,” said Delaronde, a multimedia artist from Kahnawake.

“This is my first solo exhibition ever, so in terms of my professional development as an artist, it’s really huge for me personally.”

In 2014, Delaronde received a grant from the British Columbia Arts Council to produce the body of work. She started with her own portrait that May with the help of her photograph mentor Ellie Dion, and then went on to create 32 additional collaborative portraits.

“We thought it was a really good idea to premiere this series of photographs. We are the university’s gallery, so we see ourselves as being a really good venue for exhibitions that are challenging, that will have issues that we can discuss on different levels,” said Mary Jo Hughes, director of the University of Victoria Legacy Art Galleries.

“I know in Canada, there isn’t the greatest track record of giving women solo exhibitions, so we also thought it was really important to give her a solo exhibition and to celebrate it.”

“It’s in defiance of how that word was used against Native women. A lot of my philosophy and working in the arts is about healing, so going into the pain and traumas of First Nations people and transcending that message into something powerful, empowering and where we’re continuing to have autonomy and self-determination,” said Delaronde.

The individual portraits dismantle the negative stereotypes of Indigenous women by allowing the participants to portray themselves authentically, reflecting on themes of Indigeneity, womanhood and sexuality.

“So many of the times, we see projects around Indigenous girls and women framed as empowerment, which is kind of saying we’re going to empower ourselves – not necessarily recognizing all the stuff that we have to come up against.

“In a way, it’s made very clear that it’s not just about empowerment, it’s about resistance too,” said Sarah Hunt, an assistant professor of critical Indigenous geographies.

Hunt is one of the 33 women who were photographed for the project.

“It was a really great opportunity to be a part of collective process of thinking about how Indigenous women are represented and then how we want ourselves to be represented,” she said.

“I’m used to doing that in text, but not in photograph, so having that supported by Lindsay was a very safe and powerful process to do together.”

Throughout the process Delaronde viewed herself more in the role as a facilitator rather than the artist.

She asked each participant questions about what it means to be an Indigenous woman.

“What does it mean for eroticism and vulnerability and empowerment – what do these words all mean to you in terms of Indigeneity, womanhood and sexuality?’” said Delaronde.

“Those are the main themes I was working with, so each individual participant really was able to self identify that through going into their own process of what that means to them.”

The process is reflected in the diversity of each portrait.

“They would create the concept of their photo shoot, they would tell me when, how, where, why they wanted to shot this way, so a lot of it was created through relationship. I never dictated or took creative control of the process – I was more of a guider of support,” said Delaronde.

“My whole philosophy of creating work is about responding to community needs, creating spaces in culture in our mainstream society that doesn’t exist. So, this project is really about creativity coming out of a place of restriction,” said Delaronde.

Whether it’s about society building on what it means to be a woman or to be beautiful, or the historical complexities with violence against Indigenous women, Delaronde’s work pushes layered stereotypes aside.

“For each of them to chose the image that they wanted to be a part of the exhibition was really important. It’s really taking myself out of the mastermind of things. It’s really about collaboration and working in an Indigenous way,” said Delaronde.