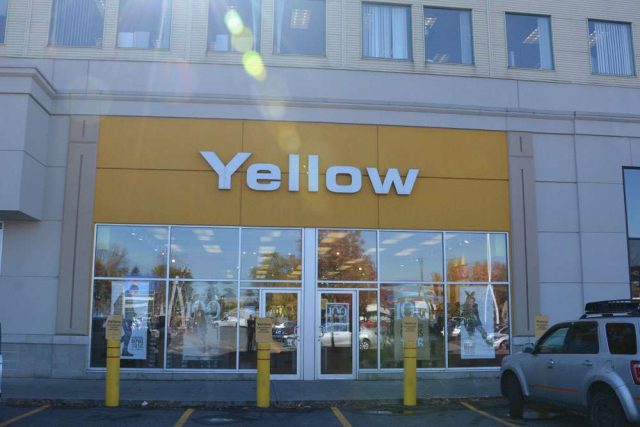 Yellow Shoes in Chateauguay and the other locations in the region will now be giving tax exemption to community members after a misunderstanding of Revenue Quebec’s tax exemption policy was cleared up. (Daniel J. Rowe, The Eastern Door)

Frank “Putsky” Rice was shopping for shoes and found a pair at the Yellow shoe store in Chateauguay. When paying for his runners, the cashier told Rice that the store would not take the tax off for the purchase.

Rice paid, but said he would not go back.

A week later, John Latour of the Mohawk Council of Kahnawake’s legal department, made a call to his contact at Revenue Quebec to inform them of the situation after getting numerous complaints about the store.

“I’ve been calling her on a few occasions, and I mentioned to her that we are having this ongoing problem with Yellow, and she sent me an email this morning (Tuesday) confirming that the director of Yellow was contacted yesterday, and he claims that it was a misunderstanding of exempting taxes for Mohawks of Kahnawake,” said Latour. “They thought it was optional.”

An email from interim director of Native Affairs at Revenue Quebec Julie Richard reads “the Finance Director of Yellow assure Revenu Quebec (sic) that they will respect their obligations and will send a new method of procedure to their stores and employees.”

After The Eastern Door print story ran Friday, October 21, Latour said some community members were still having issues getting tax exemption at the store, and Latour is working on Yellow’s management to ensure staff and management at the stores know the proper policy, as word may not have travelled down the chain in a prompt fashion.

Yellow’s loss and prevention and sales audit manager Rania Bouery said previously that the store’s policy was in line with proper tax exemption policy in Quebec.

Yellow has two locations on the reserve in Maniwaki and Sept Isles, where the stores offer full tax exemption.

Latour said last week Yellow’s management will implement exemption for Kahnawa’kehró:non from now on, but may not have informed all the stores yet.

“The finance director of Yellow assured Revenue Quebec that they will respect their obligations and send new methods of procedures to their stores and employees,” he said.

Those who experience issues with point-of-sale exemption can read the “Special Measures for the Mohawks of Kahnawake” page of Revenue Quebec’s website.

The page refers to the 10 sectoral agreements between Quebec and the MCK signed March 30, 1999.

“As a result, you (retailer) must not collect QST on sales of corporeal movable property intended for personal use or consumption to Mohawks who ordinarily live in Kahnawake,” reads the site.

The site goes on to explain that meals at restaurants, fuel and alcoholic beverages are not covered by the agreement. Customers from Kahnawake must provide their Indian Status card along with either a driver’s license, a health insurance card or birth certificate issued by Quebec.

The list of municipalities covered is also listed on the page, and includes Chateauguay, Ste. Catherine and the island of Montreal.

Latour said Revenue Quebec does follow up on issues with retailers not complying with the agreement, much like it did with Yellow.

“I’ve had quite a few calls on this, and even some of the chiefs were getting called on this because I guess they’re doing a lot of business with people from town,” said Latour.