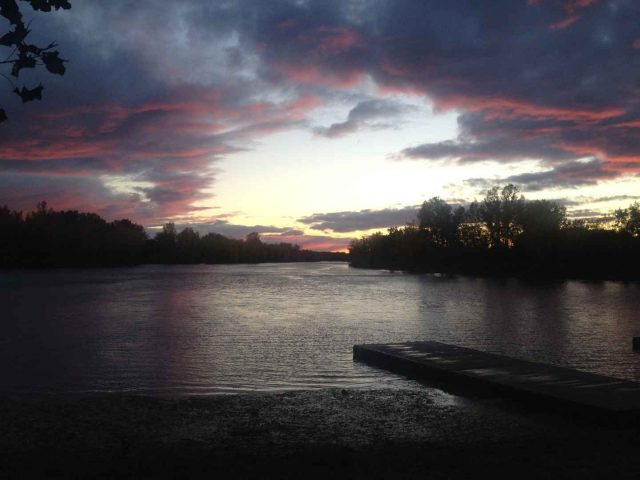 Recreation Bay is one step closer to being a place community members can use throughout the year, as a comprehensive restoration plan continues to move ahead that will cost around $2 million. (Jessica Deer, The Eastern Door)

By the middle of July, the boys and girls hoping to bring home medals at the Onake Paddling Club had to find somewhere else to paddle besides Recreation Bay.

“It’s so shallow in some areas, particularly by the Elders’ Lodge, that we can’t even paddle through there or we’d hit bottom,” said Onake coach Maris Jacobs.

In addition, the water quality is less than desirable for kids who sometimes accidentally fall in.

“The water itself is really stagnant,” said Jacobs. “Last summer, the environment office (KEPO) tested the water and we actually had to close the club because it wasn’t safe to let people paddle that day. Because the water just sits there, the waste from the ducks and geese doesn’t move and contaminates the water.”

Things must change, and change soon if community members have a hope of not changing the area’s name from Recreation Bay to Stagnant Stillwater Bog.

The Kahnawake Environment Protection Office (KEPO) is in the midst of developing a new design for Recreation Bay based on years of tests and analysis of the region that will increase flow through the bay, remove sediment that has built up over the years, and restore the shorelines.

The project comes after years of looking at water flow, wildlife and the quality of the bay, and developing possible models to save the area from becoming a stagnant bog.

“The project this year is doing a detailed design,” said KEPO consultant Patrick Ragaz. “Before you can go ahead and build something or do a restoration project, you have to make sure that you have a design in place that’s going to be sustainable over the long-term and looks at issues like what we are going to do with the sediment, how do we prevent the sediment from re-suspending and flowing downstream, causing environmental damage that way? Those types of issues.”

KEPO hired AECOM, a US-based multinational engineering firm involved in water restoration projects across the globe, to come up with a design.

A part of the restoration must include hauling sediment out of the bay. When the St. Lawrence Seaway was constructed, it changed the flow through the bay, and caused sediment from the Chateauguay River basin to settle in the bay.

Sediment that has built up may be clean, giving KEPO the option to reuse it rather than disposing of it in a landfill, which would have a substantial additional cost.

Last year’s modeling exercise looked at developing a model of Recreation Bay that would address the problem of water flow through the bay and accumulation of sediment.

“In that model we looked at the existing situation and then what would happen if we changed certain things,” said Ragaz.

The three things the studies showed would be most effective to solve the water stagnation issue were frequent removal of the aquatic plants in the bay, excavating sediment in the shoal region (near the remnants of the island in the bay), and increasing the flow at Ste. Catherine.

“With all the nutrient rich sediment that’s coming in, the aquatic growth is getting a bit out of control,” said Ragaz.

The weeds are the biggest issue for paddlers during the summer.

“The seaweed is really what prevents us from doing things in the bay, especially with the younger kids,” said Jacobs, who has paddled for years at Onake. While more experienced paddlers can practice on the Seaway, the younger kids cannot for safety reasons, and require the comfort of the bay.

“We need that space for beginners and to run our summer camps,” said Jacobs. “We also have a hard time driving the motor boats because of all the weeds. This becomes a concern for things like family night, when all of recreational paddlers are in the bay.

The bay also has other issues, including Kateri Island’s shore, which is not ideal for community members’ use or for wildlife to have access to the water.

“When they built the island, basically, they just put down riprap, so it’s not the friendliest access to the water for community members or for turtles and other species to use that zone in between the water and the land,” said Ragaz.

Riprap is rectangular stone that is dumped on shorelines to form a foundation for breakwater or other structure.

A natural shoreline has more of a transition line with a gentler slope and vegetation, Ragaz explained.

“Taking away some of that riprap, and putting in other strategies, green engineering solutions that open up the shoreline, and allow for a better transition for wildlife and also establishing some more formalized access to the water for fishing or other activities,” said Ragaz.

The Kahnawake Youth Center has an annual bullhead fishing derby in the bay along with other activities in and around the bay area. Seeing its restoration would mean expanding programming options for the youth centre as well as other organizations in Kahnawake.

“For the community, the bay would be great if the water was moving,” said interim youth centre program manager Kyle Zacharie. “For various activities, if the water was deeper, you could do a lot of things, but the water’s stagnant right now. It just sits there.”

Many community members fish recreationally in the area, and although fish studies done in the recent years have shown that fish are relatively safe to eat, the situation could very well change if the bay is not restored properly.

“We’re essentially at a point where we need to take action if we want to continue to have a good quality fish habitat in that area,” said Ragaz.

Environment Canada is funding the current project, as it has throughout past stages, and KEPO continues to work with other partners to find the around $2 million needed to do the work for the final restoration plan that may begin next summer.

“We’re certainly hopeful that the pieces are falling in place for us to get that money, but it’s not a sure thing at this point,” said Ragaz.

A detailed plan with a cost estimate is scheduled to be ready in February.