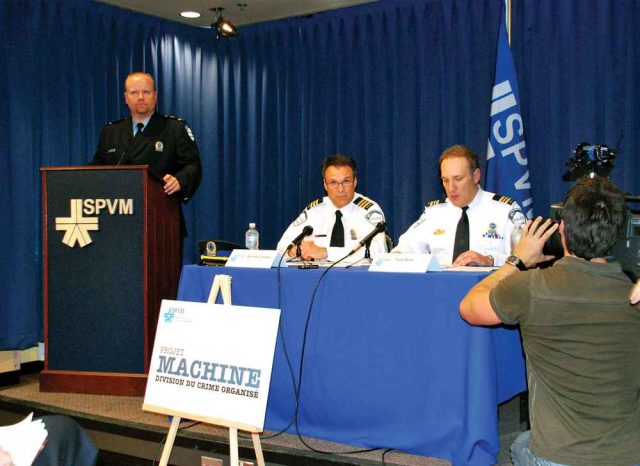 Nearly 90 months after being charged following a dramatic raid of their property in Kahnawake, Peter “Boy” Rice, Peter Francis Rice and Burton Rice had their charges dropped in September.  (File photo)

So it ends, not with a bang, but a whimper.

After a dramatic raid and arrest at the old Studio USA building in Kahnawake, a swirl of media attention and over seven years of court dates, Quebec Superior Court justice James Brunton ended the case against Peter, Peter Francis and Burton Rice September 21, when he ordered a stay of proceedings, as the case had taken too long to go to trial.

What was set to be a four-week trial full of evidence related to tobacco, the Hell’s Angels and constitutional arguments went away – at least for the time being.

“A stay of proceedings means basically that all charges are dropped,” said Rice attorney Alex O’Reilly. “It was quite a turn of events, to be honest with you.”

The decision comes over seven years after the men were charged in relation to Project Machine on June 3, 2009 with fraud and benefiting or directing or associating with a criminal organization.

Crown prosecutor Philippe Vallieres-Roland was short on words when contacted by The Eastern Door, but said he intends to appeal Brunton’s decision.

The three Rice men, along with co-accused Salvatore Cazzetta, a well-known member of the Hell’s Angels, were slated to go to trial this week.

“The court has decided that, as of the end of the anticipated trial in November, 2016, the delays are unreasonable and contravene s. 11(b) of the Charter,” reads Brunton’s decision.

Section 11 of the Canadian Chart of Rights and Freedoms, which is part of the Constitution Act of 1982, reads: “any person charged with an offence has the right to be tried within a reasonable time.”

The stay of proceedings is based on the defence’s decision to file a “Jordan motion,” based on the Supreme Court of Canada judgment from July of this year when Barrett Richard Jordan argued the over-four year delay in his case was against the Canadian Charter.

“Institutional delays, which means the delays of the court and the time it takes for the judicial system to process someone who’s accused of a crime, or even if you’re talking about civil proceedings, have over the past few years become alarmingly long, so the courts have become very, very sensitive to that,” said O’Reilly.

“Now the Supreme Court in this Jordan decision kind of simplified everything and said that if you are being judged in the Superior Court there should not be a longer delay than 30 months from the time of the charge to the end of the trial, and that delay is actually 18 months if you’re going before the Court of Quebec for a penal infraction.”

The crown argued that many delays were due to defense motions in the Rice case, some of which Brunton granted, subtracting those delays from the overall 89 months the case took.

The three Rice men had 64 court dates, ending September 21 when the Jordan motion was granted.

“The court holds that the motion was tardy in the extreme and it does not accept the explanation for the tardiness advanced by counsel,” wrote Brunton.

In all, Brunton wrote, “the result in total is a delay of 76 months, which is above the 30-month ceiling and is, therefore presumptively unreasonable.”

The argument that the case was “particularly complex” was considered and Brunton conceded that it was “moderately complex.”

“The theory of the case was straightforward,” the justice wrote. “The petitioners had sold tobacco products to non-Aboriginals and had defrauded the two levels of government by not remitting the consumer retail taxes.”

He added that even before the Jordan decision, the delays would have been well above what is reasonable.

The prosecution had intended to produce physical surveillance, judicially authorized intercepted conversations and materiel seized from the men’s Studio USA business in Kahnawake. Twenty other people were accused in the original raid and 43 more in the Montreal and Terrebonne area.

The Rice defense team had planned to argue that the charges related to tobacco against the men were unconstitutional due to the inherent right to trade in the product, and were preparing a constitutional argument, which O’Reilly was part of preparing.

The Eastern Door attempted to contact the Rice brothers and their father this week, but were told they were out of town and unavailable for comment.

O’Reilly added a word of criticism for the crown that will no doubt see the decision as a major blow in its efforts to combat perceived organize crime in Quebec.

“They were still sending disclosing evidence up to a very short while ago,” said O’Reilly. “If technically you were ready to charge someone in June, 2009, what are you doing still putting together your evidence in 2016?”