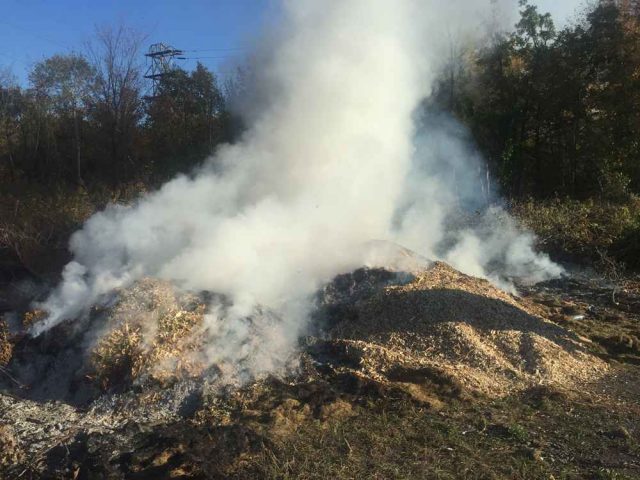 A fire that burned for two days was finally put out by Mother Nature, however the next day it reignited.  (Steve Bonspiel, The Eastern Door)

Thick billowing white smoke wafted through the air over several kilometres on Tuesday; wood chips and other natural debris burning in a large pseudo-landfill area off of the Seaway Road before the Transfer Depot.

It wasn’t until two days later when the rain came that it was finally extinguished.

It’s unclear who or what set the debris on fire, but it brought to the forefront key issues that are often in the news:

Illegal dumping (by individuals and organizations in and around town).

And, of course, obvious environmental concerns.

The Eastern Door initially alerted the Peacekeepers to the fire, and arrived on scene at the same time as patrolman Cody Diabo, who assessed the damage of a burning pile that would not stop smoldering.

Assistant Peacekeeper chief Jody Diabo explained the difficulties with a small police force trying to keep up with the demands of a large footprint.

“They patrol out there and they respond to calls,” she said. “Sometimes we find somebody and sometimes we don’t. It’s kind of hard to be everywhere.

“People dump. Do we catch them all the time? No we don’t. Do we know of all the dumping that has taken place? No we don’t. But has it gotten worse? I truly don’t think so.”

Worse is a relative word. The Eastern Door visited an adjacent site in fairly close proximity to where the old Kahnawake Survival School used to be, and it is littered with old TVs, rugs, hoses and various pieces of broken glass and shot gun shells.

In fact, it has been a dump for 25 years, according to public safety inspector Dennis Leborgne.

When the Transfer Depot is closed, or their trash is refused, Leborgne said, “people take it upon themselves to dump where no one can see them or catch them.”

After the call at 4:09 p.m. on Tuesday, another call came in to the PKs at 1:49 a.m. Wednesday morning – an off-duty conservation officer concerned with how the fire was burning.

Another Peacekeeper attempted to put it out with a fire extinguisher at that time, but no luck.

“They’ll say they can’t leave work for that and their employers will say the same thing – they allow them to respond to emergencies and that’s not an emergency. Basically what it is, is stupidity.”

“If I shut it out, someone will start it again anyway. It’s an ongoing issue there.”

Scott’s budget is tight and fires like this are deemed a waste of resources and a strain on a volunteer fire brigade.

“I don’t know who’s dumping there but if it’s an organization in town, they need to take care of their mess, rather than calling the fire department again,” he said.

Director of Public Safety Arnold Lazare admits some organizations in town do dump there – mostly wood chips, branches and other things – but the site also had treated wood, a bonfire with beer cans, and fireworks – indicating it is a place people go not only to dump garbage, but to have a good time.

The KFB called Lazare and requested heavy machinery in the form of a big shovel to come in on Thursday, to separate the burning part from the rest of the debris, but it wasn’t needed after Mother Nature put it out.

“We’re appealing to the community not to light it on fire,” said Lazare. “The people in the area have to deal with the smoke. By putting a fire truck out there, their response to another call is delayed, so we want people to understand that. It’s not just trees burning, it’s a bigger picture.”

Lazare has put calls in to community organizations to get together and figure out how to address the issue.

One possibility is opening up what the Transfer Depot can accept – they have turned away things like desks (you have to dismantle them first), paint, batteries and TVs – as part of the process of making trash disposal better, he said.

Large culverts fraught with spray paint and taken from the old Sesame Street park years ago bar entry to the site that hosted the two separate small fires, but one of the pieces was moved aside to allow for easy access.

One of the problems is the large culverts are flat on the ground, making them easy to manipulate and move around.

“I’m focusing on education right now instead of consequences, which will get more benefit,” said Lazare.

“The smoke is not healthy, even though it is trees. We don’t know what else is in there, it could be chemicals,” he said.

“The sad part is we believe it’s a lot of our own people who are dumping,” said Lazare. “There are people in the community who believe they can do what they want, and the respect aspect is lost. How do we change those people attitudes?”

Community members accepting dumped material is also another issue, he said, and if a story in last week’s Eastern Door where ex-landfill workers allegedly accepted money to illegally dump materials here is any indication, it is a problem that won’t just go away – with so much money involved.

Previously in August, a man was caught dumping trash at Adirondack Junction, paid for by someone in Chateauguay.

An address was found on an old receipt and he was forced to clean up his mess.

The Kahnawake Environment Protection Office’s Lynn Jacobs was unaware of the fire on Wednesday, but said “There are emissions that come from burning wood in general,” adding the issue would obviously be more detrimental to the environment if the treated wood on scene were to be set ablaze – releasing toxic chemicals into the air.

Town workers will be reducing the size of the now-extinguished wood and chips, but what happens to them from there is still up in the air, according to Lazare.