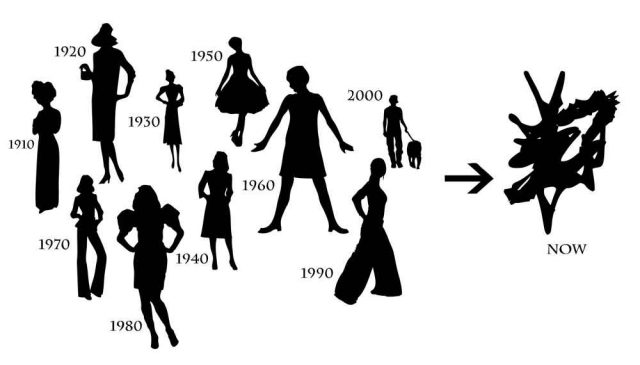 It used to be that fashion had rules.

Throughout the 20th century, there were very clear-cut trends and silhouettes that the average person could follow with a sense of reassurance that they were up to date and safely in style.

You know, drop waist flapper dresses in the 20s, cinched waists and full skirts in the 50s, mini skirts in the 60s… you get the idea.

Each decade can almost be reduced to a single silhouette that’s easily recognizable, both from the style of the clothing to the colour palette.

So, as the last few weeks went by, I knew that fall was approaching, and with it, this article. As usual, I spent some time researching fashion trends and looking around at what’s available in stores with their deliciously fresh new arrivals for fall, trying to pin down what the next big trend or silhouette might be.

The truth is there is no defining trend for fall 2016. Yes, you will go into stores and be overwhelmed with the vast expanses of plaid shirts and ripped jeans and reprints of Nirvana t-shirts on the racks. But that’s nothing new.

In fact, the grunge era of the 90s has been back for several seasons, actually several years now.

But when you take a look at the runways and what designers are releasing this season, you will quickly notice that the 60s, 70s, 80s, 90s, and even the early aughts are all being referenced in designers’ collections. So what on earth do you do? How do you choose?

How can you possibly focus and shop based on these collections when your closet will look like you took a fishing net and dragged it through a vintage store?

The rules have long ago been thrown out the window.

Part of this is happening because social media is causing fashion cycles to spin faster. Fashion lovers want runway looks the instant they see them, and are bored by the time they hit stores a year later. The traditional structure of presenting fashion collections at fashion weeks each season is quickly crumbling, as we’ve seen with the demise of Toronto Fashion Week, which came on the heels of Montreal’s Fashion Week being reduced to a side show of the Festival Mode et Design in 2013.

What does this all mean for the rest of us?

I think that our society is turning into The Lego Movie.

If you observe what people are actually wearing on the street year in and year out, you’re going to see that the skinny jeans, loose top or plaid ensemble with a leather jacket has become a go-to since the recession. It’s the utilitarian uniform of casual wear.

Yes, there are a few quirky artsy gals who follow fashion trends and pull off some interesting looks, shooting some selfies for their #OOTD on Instagram.

But they are rare birds, and among them you can hardly spot any overarching trend other than a penchant for rainbow-coloured hair and creepers.

The masses are longing for a uniform, but there is no consistent direction coming from designers and as a result, we’re all dressing like Lego men.

Even pop music is starting to morph into the same song, defined by the ‘millennial whoop’- just Google that term and you’ll run into a bunch of articles pointing to the nearly homogenous use of this vocal hook that has stubbornly persisted for over a decade now.

Are we getting closer to society agreeing that only one song is needed? Why not call it Everything is Awesome, sing it every day, and be done with it. It’s efficient. Less decision-making.

I understand this logic to a certain extent. Decision fatigue is real. It can greatly simplify your life to just stick to a basic look and keep it forever.

It saves you time and energy, both getting dressed and going shopping. In fact, I’ve set up something of a uniform for myself in my own wardrobe, opting mostly for combinations of black, white, green, and florals.

But. And this is a big but.

What about the joy of wearing something outstanding? Something that expresses who you are? This year the fashion world lost Bill Cunningham, the legendary street style photographer for the New York Times who died in June at the age of 87. (Click that link and enjoy. RIP Bill. You’re a legend)

He was a uniform man himself, always seen in the same blue jacket and chinos, but spent his days capturing the truth of what women wear on the streets of New York with his 35mm film. He teased out trends just through observation.

Anna Wintour, the editor of Vogue US, among other famous women, has declared that she dresses for Bill.

If you have a chance, watch the documentary Bill Cunningham New York on Netflix. I guarantee you will want to step out in your finest every day after watching it, or at least make some serious upgrades to your wardrobe.

I do believe there is a peacock in all of us, longing to draw a bit of attention at the fanning of our feathers.

Maybe that’s just it. Maybe our lives are on display too much with social media that we need to hide in plain sight. Maybe there are too many decisions and too many clothes cycling too fast that we’re overwhelmed and just reach for the tried and true.

My challenge is this: pick a day of the week, and on that day, wear something fabulous. It doesn’t have to be expensive, or particularly wild.

Start with baby steps – maybe it’s going to be a bright red pair of shoes, or a simple colourful blouse you can hide under your blazer at work if you feel self-conscious.

Next thing you know, your inner peacock will want to flaunt its feathers. You’ll be inspired by a movie, or a play, or a visit to the Biodome.

Just don’t sing the same song every day, even if it’s hard to choose a new one.

If you enjoyed this piece and feel like reading my work more often, you can subscribe to my email list and get fun times in your inbox every other Thursday.