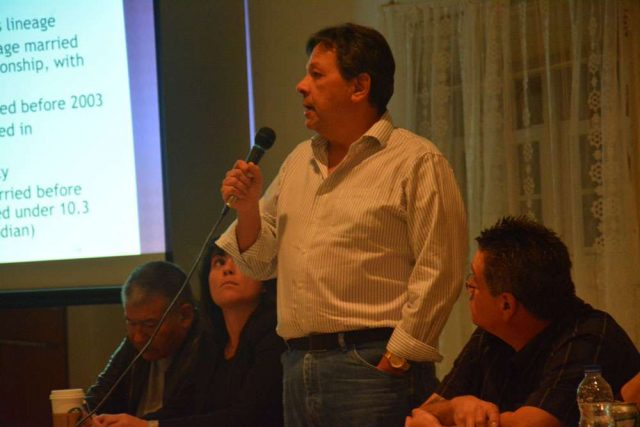 MCK chief Clinton Phillips sits at the head table as council debates new ideas about residency to accompany the ongoing discussions and amendments to the Kahnawake Membership Law. (Jessica Deer, The Eastern Door)

The Mohawk Council of Kahnawake called a special community meeting this week to discuss a long list of issues surrounding membership and residency.

“There’s a conflict of control on membership,” registrar Rose-Ann Morris said at the beginning of the meeting, which took place on Wednesday night at the Kahnawake Legion Branch 219.

Morris provided the 50 or so Kahnawa’kehró:non in attendance a breakdown of statistics outlining the conflicting criteria between Canada’s federal band list and who the community considers a member according to the Kahnawake Membership Law.

As of August 31, Indigenous and Northern Affairs Canada (INAC) has 10,922 individuals on the Kahnawake’s federal band list.

The number is in stark contrast to the number of members enrolled on the Kahnawake Kanien’kehá:ka Registry (KKR), which only lists 6,611 members.

Morris said the over 4,000 discrepancy between the two lists is a result of Canada’s lack of consultation with First Nations on past amendments to the Indian Act.

“Just to give you an idea on how the impacts of the registration – in 2015, Canada registered 233 individuals onto the Kahnawake federal band list,” said Morris. “Sixty percent did not meet our membership criteria.”

Many of the new registers are a result of Bill C-3, which amended section 6.2 of the Indian Act, extending registration to the second generation of women who were affected by past sex-based discrimination policies.

Further amendments are expected to occur in February as a result of the Descheneaux decision from a judge in the Superior Court of Quebec.

“They’re looking at opening up registration to the third generation of descendants of person who were discriminated from past residual sex-based discrimination in the Indian Act,” said Morris. “That means INAC will be adding newly registered persons to the federal band list managed by Indigenous Affairs.”

Membership portfolio chief Kahsennenhawe Sky-Deer said the planned amendments are just some of the issues being brought forward at the Kahnawake/Canada relations table.

“They’re still making Mohawks of Kahnawake,” she said. “We’re trying to come to resolutions for them continuing to make Indians and tying them to 0700- Kahnawake, giving them band cards and lands issues that we have.”

She said one of council’s main concerns is that the 4,000-person population could one day outnumber Kahnawake’s registry.

“What’s needed is for us to control who could live here because there’s registered Indians that INAC keeps adding to our list that don’t meet our criteria and who may no longer have ties to Kahnawake,” said Sky-Deer. “There’s no control when it comes to residency. Even Natives from other communities come here and take up shop. It’s turning into a free for all.”

One of the solutions being proposed is a separate residency law through the Community Decision-Making Process (CDMP) to control who is and isn’t allowed to reside in the territory.

“We want to ensure Kahnawake remains a Mohawk community,” said Sky-Deer. “What I hear from the people, this is the direction. We’re going to stay on it. We don’t want to be labeled a racist community. Is it about racism? No, it’s the preservation and survival of our identity of who we are as a distinct people.”

When it comes to non-Indigenous people, council has sent a total of 48 eviction letters since January to individuals allegedly residing in the territory.

“Recipients are being asked to respect our laws and will of the people by either vacating the territory or providing the proof of residency elsewhere,” said membership portfolio chief Arlene Jacobs.

The latest were sent in August to 25 people. In total, Jacobs said only four people have moved, while seven provided “acceptable” documentation of a residency outside of Kahnawake.

“One sent documents that were not accepted because she only sent a driver’s license, which doesn’t prove you live somewhere else,” said Jacobs. “One did not accept the letter, we received one lawyer’s letter, one requested an extension for 60 days. I brought it to council and council granted the extension.”

She added that three recipients called council seeking more information, however, 27 did not respond to the letter at all.

Jacobs said herself and Sky-Deer were exploring a number of avenues to put pressure on those who have yet to leave as a part of a “non-entitlement plan.”

The plan included the possibility of publicly releasing the names of the individuals, or shutting off their water – both, suggestions brought forward at council’s summer community meeting in August.

However, Jacobs said this week they received recommendations from their legal department advising not to do either.

“There are a lot of implications – human rights issues, sanitary issues, so according to our legal department, we cannot do that,” said Jacobs.

The next steps will be organizing strategic sessions with all organization’s units on how they can work together to “combat this issue,” said Jacobs. “We’re looking towards the future – our children’s children will have a future here if we all stand together.”

Sky-Deer opened suggestions up to the floor.

One person in attendance said more needs to be done to pressure non-Indigenous people residing in the community.

“Go to their house, make them feel accountable, make them feel unwanted,” she said. “I work for an organization where I can’t protest at people’s houses. I can’’ write anything on social media, which I think is honestly bullshit. I’m being asked to give up my right to freedom of speech because I work for an organization in the community, which I feel like they should be following MCK on this membership issue.”

Others suggested targeting the Kanien’kehá:ka in the relationship.

“A lot of these people who are in breach of our law, they should be looked to not entitle them to these permits to work here – they’re breaking laws, so they’re not in good standing,” said one participant.

Although she wasn’t in attendance, filmmaker Tracey Deer was the repeated target of people’s complaints throughout the meeting.

“Tracey Deer married a non-Native. It just came to my attention the other day. What’s going to be done to her? Is she going to go on the list? She shouldn’t be filming that show (Mohawk Girls) here anymore,” said another community member.

For council’s press attaché Joe Delaronde, more advertising with messages targeting those breaking the law ought to be put in local media.

“That kind of pressure is effective. It’s the consistency of the message. You just have to be consistent. It might add a little to the budget, but the more the message is out there – it doesn’t have to be nasty – just a reminder that there’s a law,” said Delaronde.

Other community members used the open discussion to bring forward their concerns of non-Indigenous people owning land in the territory.

Lands portfolio chief Clinton Phillips said while council’s lands unit will only transfer land between two people listed on the KKR, anyone with a federal band number – even those with acquired status – can do so through INAC’s regional office.

The reality upset many in the room.

“That is the problem we face with everything we do here – It is controlled by somebody else,” said MCK grand chief Joe Norton.

“On top of that, we allow that situation to happen. We enable the white people to be here. Goddamn, until we understand that, this is going to continue. It’s happening because our own people allow it. It’s the same thing about the land.”