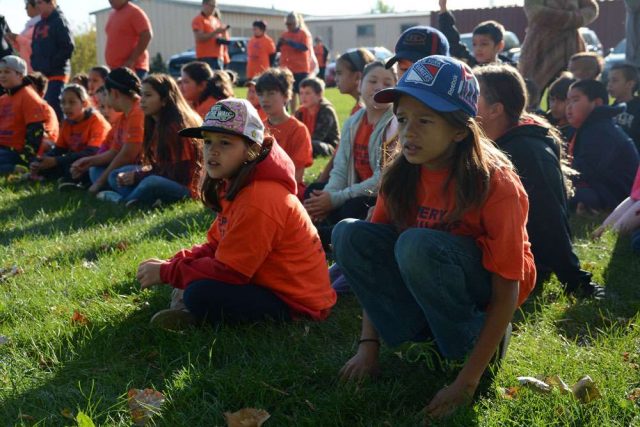 One colour was spread throughout Kahnawake Friday in a glowing reminder of the legacy of residential schools and their impacts on those forced, coerced or convinced to attend the institutions.

That colour was orange, and t-shirts throughout Kahnawake read “every child matters,” “never forget,” “nihatiia’tanó:ron akwé:kon ratiksa’okón:’a,” and “we honour our survivors and hold in our hearts the ones lost to residential schools.”

It was “Orange Shirt Day” and hundreds gathered on the green space around a fire between the Golden Age Club and the old K103 Radio to remember those who went through the schools and never came back, to honour survivors, and attempt to heal from the federally-legislated policy that ran in Canada officially for over 120 years, and has been labeled a cultural genocide.

“I want to sit next to my sister,” said one young boy from Karonhianónhnha, sitting decked out in orange while his sister, along with a large group of Kateri School’s students, approached.

The simple desire of the young student was poignant as they are words students who attended Spanish Residential School in Ontario would likely have said, thinking they would come true.

“Some totally lost their families,” said former-Spanish student Marianne McGregor, originally from the Anishnabek community of Wikwemikong who now lives on Birch Island in Ontario.

“I think it went great,” said Helen Jarvis Montour, daughter of residential school survivor Frank Jarvis Montour. She organized the Orange Shirt Day event in Kahnawake for the fourth year, and spoke about the need to heal.

She, along with two young local students, released four orange balloons Friday to commemorate the fourth such event in the community.

“It was a healing experience for a few people, who came to understand a bit more,” said Helen. “I was overwhelmed by the response on the Orange Shirt Day Kahnawake (Facebook) page, and all the orange throughout the community. People were saying to me, ‘look. I got mine on.’”

Some survivors did not want to speak about the negative experience at Spanish or other schools, but rather how fortunate they were to survive and thrive after leaving the institution.

“Some of us were lucky to go back to our communities,” said Marianne, who went on to attain post-secondary school degrees and become a teacher.

The group of survivors also spoke about the life-long friendships that were forged and grew stronger in the years since they left the school.

Marianne McGregor spoke of going to dances, watching movies and other activities the students did together.

“We had lots of sports,” she said. “Her (Josie McGregor) and I played hockey.”

The women and men stay close, and visit each other regularly in each others’ communities.

“They still come and visit us yearly,” said Evelyn Oskaboose.

“We just came from Ontario, Evelyn and I, arrived here on Wednesday,” said Mariane.

Being together in such a trying situation had one definite result, according to the ladies.

“When we were there, we were all sisters,” said Marianne.

Mi’kmaq Don Barnaby, whose mother went to a residential school, sang and played his drum for the survivors that assembled Friday.

Residential schools operated in Canada from the mid 1800s until 1996 when the Gordon Residential School in Saskatchewan closed.

The system was set up by the Canadian government and operated by churches that sought to assimilate Indigenous students into the mainstream of Canadian society.

Survivors like those, who attended Friday, were not permitted to speak their languages or practice their cultures, and many such as Frank Jarvis Montour, and Kakaionstha Deer suffered abuse.

Josie McGregor did not want to speak about what went on at Spanish while she was a student, but did have a word in response to those who ask about residential schools.

“When people ask me stuff, I always say, ‘I will never forgive and I’ll never forget,’” said Josie. “That’s me.”