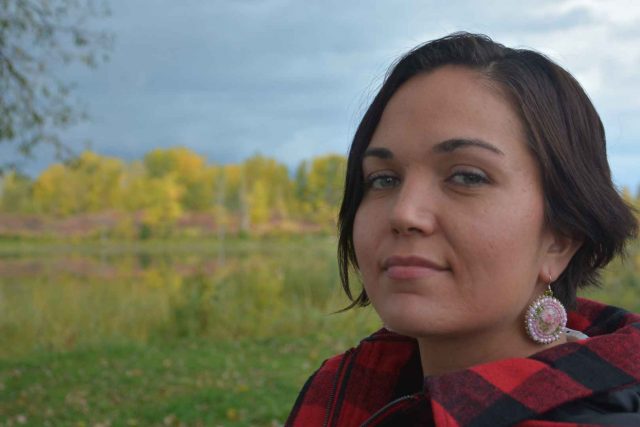 Roxann Whitebean is one of the many diagnosed with breast cancer, and advises all to get regular check ups, as Breast Cancer Awareness Month runs in October.

Roxann Whitebean and Isabelle Nicholas were diagnosed with breast cancer at relatively young ages, and as part of Breast Cancer Awareness Month, they have an important message for women of all ages:

“I found a huge lump in my breast in the shower and I Google-searched breast cancer symptoms,” said Whitebean, who was 30 when she was diagnosed.

“I had every single symptom plus I had a shrieking pain that shot down to my elbow and I could feel that something was wrong.”

Something was wrong and it would change her life, but her alertness also saved her.

August 27, 2013 was the day she was officially diagnosed, “but I knew that something was wrong a month prior to that,” she said.

“I was immediately afraid for my children. I wasn’t sure how bad it was and if I was going to survive. I felt bad for them that this had to be a part of their journey,” said Whitebean, who has since helped many others in their battle with cancer, as the focal point of a five-part CBC series called Thunder Blanket, that captured her journey, including the loss of her hair and an eventual double mastectomy.

“Destiny was 11 and I was particularly worried about her because she just started high school and we all know that teen years can be challenging,” she said.

Her other children, Shayde, 9, Keena, 4, and Tehoweren’ha, 3, were obviously scared.

“They cried all the time, they wrote me letters sometimes. Keena would try to make me smile any way that she could. They were terrified. They visited me every day when I was hospitalized, the second time for almost a month,” she said.

Whitebean’s cancer came, she said, “from exposure from something in the environment.”

“I had genetic testing done and my cancer is HER2 Positive. That means my estrogen feeds the cancer.”

“HER2-positive breast cancer is a breast cancer that tests positive for a protein called human epidermal growth factor receptor 2 (HER2), which promotes the growth of cancer cells,” according to the Mayo Clinic’s website.

Although she said doctors couldn’t pinpoint exactly what caused it, she thinks the old toxic dumps that were never properly cleaned up in Kahnawake and 11 years in Akwesasne (where she said there’s a cancer boom), tells part of the story.

The documentary has played a big role in her recovery.

“I’ve received positive messages from people all over the world. They send it to CBC or they find me on Facebook. It’s really uplifting,” she said.

Whitebean is still being followed by her oncologist but is done with chemotherapy.

“I was promised reconstruction right away,” she said. “I was terrified but overall happy to be rid of the cancer. Mine was growing extremely fast because I’m younger than most breast cancer patients.”

Isabelle Nicholas was 32 when she was diagnosed with breast cancer in March 1999.

“I discovered a lump and called my doctor to get a mammogram,” she said. “They didn’t think it was cancer but when I did a biopsy the cancer was confirmed.”

When the surgeon opened her up, they had a choice to make only then: to remove the lump or the whole breast. Luckily for her, only the lump was necessary.

“Then, under my armpits they cut 32 lymph nodes out and two of those were positive. So it was just starting to go into my system when we caught it,” said Nicholas, who is now 49.

She did chemo for two months and had 25 radiation treatments to get rid of it and is still cancer-free.

Kahnawake does not have direct statistics on cancer partially because patients go to so many different hospitals, according to Kateri Memorial Hospital communications officer Lisa Peterson.

However, in Canada, roughly 5,000 women will die from breast cancer each year, representing 14 percent of all female cancer deaths in 2015, according to cancer.ca.

One of the problems with women in their 30s, Nicholas said, is they don’t think they’re going to get cancer. So she wasn’t getting checked for it.

“I noticed it because I took off my bra and was itchy on the side of my breast. Had I not of noticed it, I wouldn’t be here today,” she said.

“I just stumbled on it. It’s a hard lump and it was painless. They say it’s a better sign when it’s painful because it’s probably not cancer.

“I’m very lucky I caught it in time because once it’s in your organs, forget it – it spreads like wildfire.”

Her children ranged in age from one to five at the time and that scared her the most.

“My attitude right away was f*ck you, you’re not taking me. I have these three kids who would probably not remember me. I was not letting anybody take me away from my babies,” she said.

Her mother Paddy’s side has a history of cancer (five women – all her mom’s sisters) – but, she said, they were all diagnosed in their 60s. Her maternal grandmother died from it.

Although she said breast cancer is not supposed to be hereditary, her daughters and sisters have been getting regular mammograms since she was diagnosed.

Her message today is to recommend regular checkups for women of all ages.

“I’m hoping some girls who saw my post (on Facebook) will do a self-breast check to make sure they don’t have any lumps, or get themselves checked by a doctor or nurse,” said Nicholas.