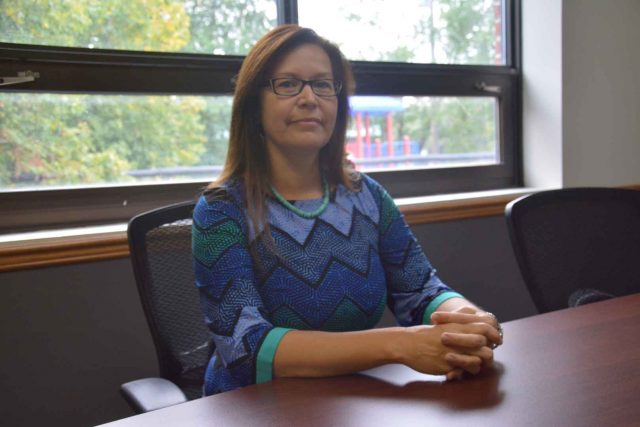 Kahtehrón:ni Iris Stacey puts her degree to work as the Kahnawake Education Center’s Kanien’kehá:ka curriculum developer after being part of the Indigenous Languages Revitalization program.

Kahtehrón:ni Iris Stacey is the first Kahnawa’kehró:non to graduate from the University of Victoria’s master’s program in Indigenous Languages Revitalization.

“I felt like the program was made for me,” said Stacey.

The mother of three defended her thesis in August and is officially slated to receive her degree, a master’s in education, at a convocation ceremony next month.

“We have a lot to share in language revitalization and a lot of people, globally, look to Kahnawake to see what we’re doing, but stepping out of the community and seeing what is happening around the world helped me to see that there’s different avenues that can be looked at; how we can strengthen our efforts and have a healthier language for the future,” said Stacey.

She began her fulltime studies in the two-year program in the summer of 2014, while also working at the Kahnawake Education Center as a Kanien’kehá:ka curriculum developer.

“It was the first time I was away from home for a really long time, so that was a challenge in itself. I just stayed focus on the work,” said Stacey.

“It’s rewarding to know what I went to school for and what I learned – I get to come back to the community and apply those skills,” she said.

The program is intended to help ‘language warriors’ develop leadership skills and knowledge in the field of Indigenous language revitalization in a community context, but also nationally, and globally.

“We’re really trying to think about best strategies,” said Peter Jacobs, an assistant professor at the University of Victoria. “In my own community in Squamish, many of us – we’ve done things just because others are doing it or it sounded interesting. So, we’re trying to help each other be more effective in what we’re doing.”

For Stacey, one of Kahnawake’s successes has been the Kanien’kehá:ka Onkwawén:na Raotitióhkwa Language and Cultural Center’s Ratiwennahní:rats Adult Immersion program.

It has helped develop 142 adult second-language speakers since it started, including Stacey, who graduated in 2006 and was the course instructor for five years.

“There’s been a lot of successes for our community and the main thing is to really build on those success.”

Throughout her studies, Stacey’s research focused on graduates of the program and how they can be supported to continue their learning.

“There still has to be that continuous support and growth for all speakers – not just beginner speakers. The more advanced still need to have support,” said Stacey. “It’s a lifelong journey to learn your language and they really want to see their children and grandchildren speaking, and that’s their motivation to begin learning.”

Stacey’s master’s thesis, titled Ientsitewate’nikonhraié:ra’te Tsi Nonkwá:ti Ne Á:se Tahatikonhsontóntie We Will Turn Our Minds There Once Again, To the Faces Yet To Come, can be read online here.

Dozens of Ratiwennahní:rats alumni were surveyed during her research.

“She really had a clear vision of what she was doing with this project and why she doing it,” said co-supervisor Alexandra D’Arcy. “She worked very hard to weave all of the voices of all of the participants in, so what she came up with was a really beautiful representation of the community voice – and that is really hard to do.”

Stacey was in the second cohort of the program, which is the first of its kind in Canada, along with 17 other students representing 16 different First Nations

“One of the amazing things about the program is that there are so many people who are in the program that are really already experts themselves in their own context,” said Jacobs.

“A lot of them have a lot to offer already, so we’re trying to help them sharpen their skills and to learn more about the larger global context.”

For Jacobs, Stacey’s research responded to the needs of the community.

“She could have done a lot of different projects, but she really tried to figure out what is the best thing that the community needs right now in order to make their next steps,” he said. “To me, it felt very relevant.”

The research was equally receptive from Kanien’kéha speakers who participated in the survey.

“I am hopeful that with this research, more tools and opportunities will be created to foster continued learning,” Callie Karihwiióstha Montour told The Eastern Door.

“When I search for Kanien’kéha classes, gatherings, CDs, books or film, it seems as if we are missing a lot of things we should have. The few teachers we have are swarmed by learners asking for help.”

“These projects are hard when you are just one individual with no funding or research to back up your ideas. Hopefully Kahtehrón:ni’s research will help us work together as a community to keep our speakers speaking,” said Montour.