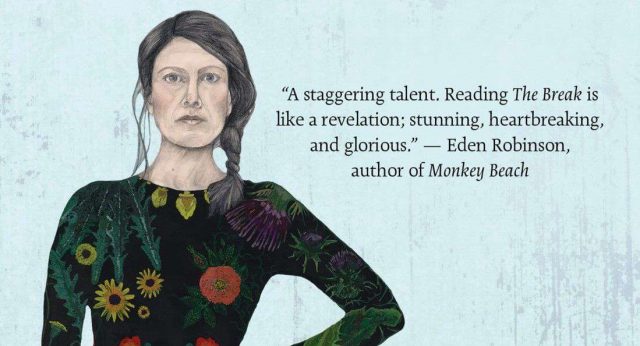 Katherena Vermette followed up her groundbreaking and heartbreaking, Governor General Award-winning book of poems with a powerful and impressive debut novel, The Break.

When Metis author Katherena Vermette’s debut novel The Break (Anansi Press, $22.95) showed up on my desk, I wanted to dive in right away, but knew that it would be best to wait.

Having reviewed Vermette’s Governor General Award-winning book of poetry North End Love Songs in 2013 (Eastern Door, vol. 23 no. 02), and recalling its vivid imagery, powerful language and very real portraits of Winnipeg’s tough neighbourhood told me that this book was going to be a very real and perhaps tough read.

My premonition proved correct, as The Break pounds with intensity and reality, and tells the bare truth about the troubled area full of gang violence, alcohol and drug addiction; but also interesting, complex and compelling people looking for ways through the seaming chaos.

Each chapter of the novel centres on one character, all but one (the Metis cop Tommy) of whom are female. All women are related save Phoenix, the troubled girl, who escaped from a youth detention centre, and is at the centre of a horrific crime on another of the book’s characters.

Vermette said in a recent interview that Phoenix was the hardest for her to write, and perhaps this is why she is also the most interesting and compelling. She is guilty of a nasty assault and in many ways is despicable as a person, and yet, through Vermette’s careful and clever narration, she also becomes someone the reader can have sympathy for or even empathy with. We discover why she is who she is and can appreciate the very real cycle of violence many urban Indigenous people are forced into.

Though very tough in it’s subject matter, the book is a page-turner and very hard to put down. The cityscape that Vermette paints is vivid and real, and gives voice and colour to people often marginalized by all sides of society.

No one character is perfect, and no one’s imperfections are unexamined in The Break, as the women all grapple with demons of their pasts and presents.

One is an alcoholic, another the daughter of a drug addict who died a horrible and lonely death, while another is a social worker, who can’t, like many, take her own advice. They all are, however, complete people.

Throughout the story, the characters are stuck between worlds as many urban Indigenous people are. They think of their home communities in the bush, but are not naïve about what it means to live there.

They also call down the condescending advice of those from supposed “better neighbourhoods.”

Take this exchange between Stella and her grandmother (kookom) speaking about an attack on Stella’s teenaged niece, which she witnesses in the book’s opening chapter.

“She looks at her grandmother, serious and straight. ‘Girls don’t get attacked in good neighbourhoods.’

Kookom looks right back, just as hard, no harder, even with her near-blind eyes. ‘My Stella, girls get attacked everywhere.’”

It came as no surprise that Vermette’s novel, much like her poems, was full of the hard reality of the Winnipeg streets.

With the wealth of characters, I found myself returning to the family tree at the beginning of the book to ensure I knew all the relationships as well as I could, as there are a lot of characters.

Her book of poems was an important and triumphant publication, and her debut novel was also incredible.

CBC podcast Unreserved host Rosanna Deerchild picked Vermette’s novel as the first in the show’s “Indigenous Reads” series that will run for the next 10 months. Vermette was interviewed on the September 18 episode and spoke about writing her first novel.

“I love people. I love how they talk to each other,” said Vermette. “I really wanted to dive into these little voices, and go into people’s heads and look around.”

She started with Stella, and added one then another then another and another incredible character resulting in a brave and important novel well worth anyone’s time to read.