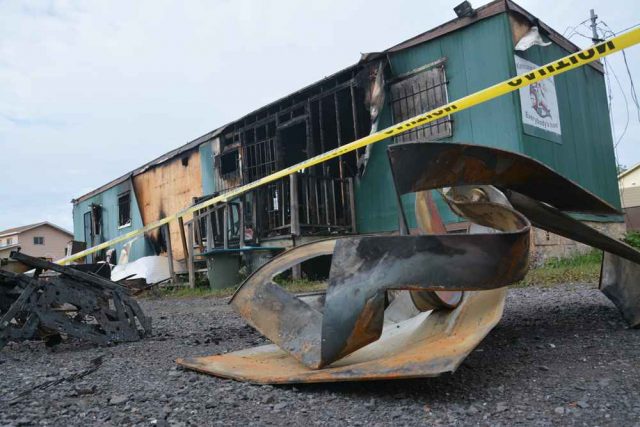 “I was angry, real angry,” said Kevin Myiow, after the trailer he had been living in since February 2015 caught fire and was completely destroyed.

“How the f$%*? Nobody was even there. Me and my cousin Star (Eagle) were only gone 15 minutes, the most. We went to the store, took a spin down by the river, then came home and boom, it was on fire,” he told The Eastern Door.

Peacekeeper MJ McComber responded to the call, which came in at 8:45 p.m., and one side of the trailer was on fire.

Hydro Quebec cut power to the trailer at 9:21 p.m. and the fire was completely extinguished by 10:37 p.m.

Myiow attempted to go into the house to retrieve some of his belongings, but was stopped by Peacekeepers because it was unsafe.

“It was too late anyways. It went up like a match,” he said. “In just a matter of minutes the whole place was engulfed. I still can’t believe that this happened.”

Myiow was left with the clothes on his back, but another cousin, Kelly Mayo, brought shirts and socks and other clothing for him.

“I don’t even have my Medicare card. Everything is gone,” he said.

Kahnawake Fire Brigade chief David Scott is almost 100 percent certain he knows where the fire started – above the stove.

Since nothing was cooking on the stovetop, Peacekeeper chief Dwayne Zacharie said the PKs are actively looking into the possibility of fireworks that were purportedly lit and launched from Matty’s Park.

They are looking for help in identifying the people who had roman candles that night in the park, just a few hundred metres away.

The other possibility, Scott said, is the hydro wires above.

“I know where it started but I’m not sure what started it,” said Scott. “Just by looking at the burn patterns and the sparking on the roof. If you look at the rafters above the stove, they’re gone. That’s the only place that it’s really burnt, but it’s total destruction in there.”

KFB firefighters were involved in special training that night, and the officer in charge responded and was on scene within two minutes and, “it was already venting out the main door and the window,” said Scott.

The truck, he said, was five minutes behind and it was fully engulfed when they got there.

Myiow dealt with a “hot” receptacle in the past, where an appliance he plugged into the wall sparked, so he stopped using it, but Scott said “Some of the circuits had tripped, but not the main,” ruling out the possibility of an internal electrical fire.

The lack of gyprock, Myiow said, and the fact the trailer was only equipped with thin paneling, meant that it had no chance against a fire, no matter how quickly it was extinguished.

The Eastern Door also spoke to Glenn Delaronde, who owns the trailer and the land it’s on. Delaronde has been hit with bad luck lately as his garage, where he also lives upstairs, caught fire in early August 2014. It was later found out to be Hydro Quebec’s fault due to an improperly installed mast, and was fully covered by his insurance company.

Myiow approached Delaronde, asking if he could stay in the trailer, which used to be a cigarette store, and Delaronde was reluctant at first because it needed a lot of work. Myiow said he didn’t care and just needed a place to stay, and moved in.

Last May, Delaronde installed a new toilet and shower, along with a hot water tank, which he said, “cost more than the trailer,” which he paid $2,000 for in the 1990s.

It was originally on the land where his business, GD’s Garage is, but was moved to its current location in the 1990s.

“I didn’t care about the trailer and I was going to move it,” said Delaronde, who was planning on putting an apartment building there, but the cost of an extension to his building slowed him down.

“There was no insurance, they wouldn’t insure that thing.”