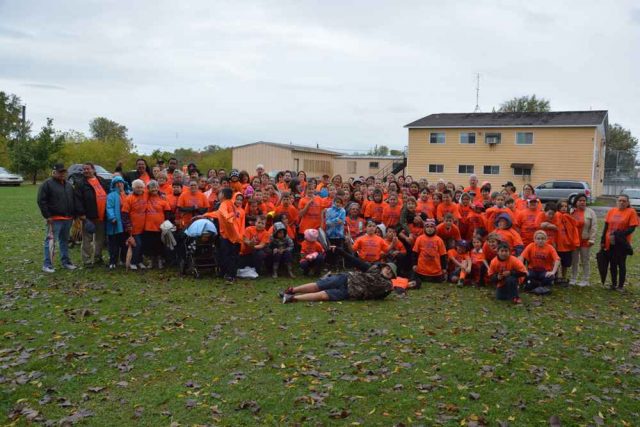 For the second year in a row, a group of Kahnawake women will bring the nationwide “Orange Shirt Day” to the community as a way to honour residential school survivors.

From coast to coast, Indigenous and non-Indigenous people across Canada will wear orange on September 30, in recognition of the harm the residential school system caused, and as an affirmation of their collective commitment to ensure that “every child matters” on the path of reconciliation.

“It’s our history,” said co-organizer June Skye-Stacey. “We need to be aware of what it is, we need to learn from it, and need to be able to not make the same mistakes – not having history repeat itself.”

Skye-Stacey, along with Helen Jarvis Montour, are inviting the community to gather at 9 a.m. tomorrow at the green space near the old radio station for a tobacco burning ceremony.

“Orange Shirt Day is wherever you are. It’s everywhere. It would be nice to see whoever can make it, to come to the green space,” said Montour. “The plan is to have as much people as possible there.”

According to the Truth and Reconciliation Commission of Canada, the system was created “for the purpose of separating Indigenous children from their families in order to minimize and weaken family ties and culture linkages, to indoctrinate children into a new culture – the culture of the legally dominant Euro-Christian Canadian society.”

Although she grew up poor, her grandmother managed to buy her a new outfit for her first day of school. Webstad picked a shiny orange shirt.

“It had string laced up in front, and was so bright and exciting – just like I felt to be going to school! When I got to the Mission, they stripped me, and took away my clothes, including the orange shirt. I never saw it again,” reads Webstad’s story on the event’s Facebook page.

“The color orange has always reminded me of that and how my feelings didn’t matter, how no one cared and how I felt like I was worth nothing,” the post continued.

Webstad started the campaign in 2013 and tells her story in hopes that other survivors will feel comfortable enough to share their stories.

The orange shirt has become a symbol of defiance against undermining children’s self-esteem, and their commitment to anti-racism and anti-bullying.

This is the second year in a row Kahnawa’kehró:non have participated in the event.

Last year, over $5,000 was raised to purchase orange shirts that were given to local schools, survivors, and community members.

A gathering also took place at the green space. Skye-Stacey said the experience was an opportunity to bond with other children of residential school survivors.

“I found after the event, to be very healing,” she said. “A lot of the people about my age and a little big younger – I didn’t know were the children of survivors, but I found out then. When you look at somebody and just kind of nod and know.”

Both Montour’s and Skye’s late fathers attended a residential school in Spanish, Ontario.

“For me, it reminds me of things that happened to him and how he suffered as a young kid. I never want to see that happen again. I want to make sure until I die that we don’t forget,” Montour said of late father Frank Jarvis Montour.

Skye-Stacey’s father Mike Skye also attended residential school along with two of his siblings. She learned about their experience from an uncle.

“They went there very young – between the ages of seven and 10, for many years,” said Skye-Stacey. “He used to get beat a lot for nothing, and he was just a little kid.”

Montour said she hopes Orange Shirt Day in Kahnawake will be an opportunity to honour the community’s survivors, and demonstrate resilience, and support.

“We shouldn’t forget what happened, but we have to look towards the future and turn that negative into a positive now,” said Montour.

This year, Merrick Diabo will be donating $1,000 on behalf of Kahnawake Shakotiia’takehnhas Community Services (KSCS) and Health Canada toward purchasing orange t-shirts for children at the local schools.

“We plan to make sure that this is yearly thing from KSCS,” said Diabo, who is the sole Indian Residential School resolution health support worker at KSCS’ Family and Wellness Center.

His position is meant to bring more awareness into the community about the Indian Residential School system and multi-generational traumas that have affected our community as a result, as well as to work directly with survivors and their family members.

“In the event that there are surviving students or family members of surviving students that want to seek services – whether that’s cultural services, meaning sweat lodges and ceremonies, or smudging or grieving ceremonies that we provide here at the Family and Wellness Center through KSCS,” said Diabo.

“Of course, there is individual counseling should somebody feel that they need those services.”

Diabo said in his experience in the position, there’s not a lot of discussion as a community about residential schools and the experiences from elders who attended the schools.

However, he said the impacts could be seen multi-generationally.