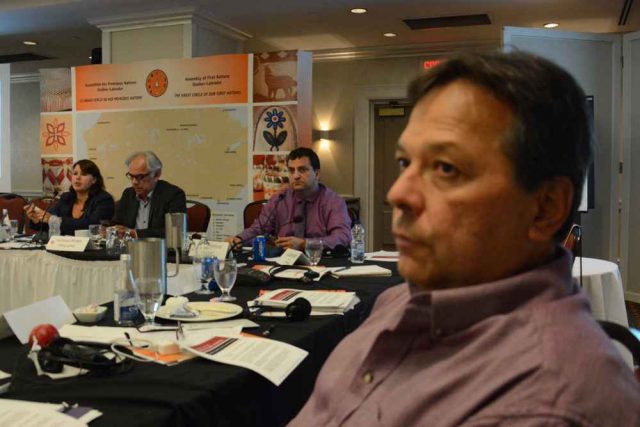 Funding for efficient policing was first and foremost the topic on the table throughout the three-day Assembly of First Nations of Quebec and Labrador Special Forum on First Nations Policing that ran Tuesday to Thursday.

Mohawk Council chief Clinton Phillips and Public Safety commissioner Ron Skye were at the meetings to listen and present on issues facing Onkwehón:we communities in the province, and provide insight from Kahnawake’s situation.

“One of the big concerns is the short-term funding,” said Phillips. “The majority of them are about to expire in 2018, and there’s always the same long, drawn out procedure (to negotiate). It’s almost a haggling thing back and forth.”

Coordinator for the First Nations training program at Nicolet College for the Ministry of Policing in Quebec (MPQ) Ivan Gray spoke about the specialized training specifically for First Nations within the province, and how funding shortfalls affect his programs.

“Right now, we’re limited in terms of giving courses to First Nations officers in the province of Quebec, based on the fact that police offices are not getting adequate funding,” said Gray.

First Nations police forces, Gray said, are the only ones in North America not deemed an essential service, technically.

The reality, however, is quite different.

“It’s really nice to hear the 11 nations of Quebec talk about the same thing: we don’t have the manpower. We don’t have adequate salaries that match outside organizations like the SQ.”

An example provided at the conference was the fact that a Surete du Quebec constable will take home around $80,000 annual, while one policing a Native community will take home half that.

The discrepancy in pay creates a major staffing problem.

“It’s kind of hard for a police department in First Nations to say, ‘come join us. We’re going to offer you this salary, which is equitable to other salaries,’” said Gray. “It’s a tough field to be in.”

Phillips put it another way.

“When a police force on a community is being jeopardized by lack of dollars, why would a youth look at that as a viable career?” asked Phillips.

Others, like Listuguj are not so lucky renegotiating agreements every five years.

Twelve officers police the roughly 3,000 members in Listuguj, and have a hard time keeping pace with the crime both sides of the New Brunswick/Quebec border that the community straddles.

“We just don’t have the money to keep up with the trends.”

Those present this week were hoping to work on a collaborate agreement that would apply across the province for funding.

Kahnawake’s council is fully supportive of other communities in the province improving agreements with the federal and provincial governments, but would not be included in such agreements, as Kahnawake’s agreements and situation are unique.