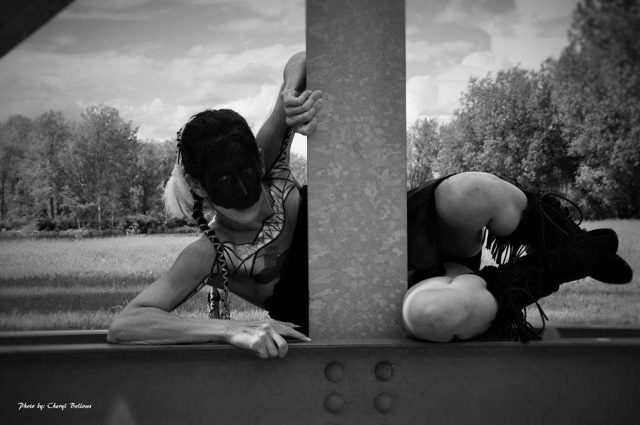 Kanien’kehá:ka dancer Barbara Diabo performed a tribute to those who lost who their lives in the Quebec Bridge Disaster last week in Halifax. (Courtesy Cheryl Bellows)

Barbara Diabo digs deep into her family’s history for her latest performance.

On Friday, the Kanien’kehá:ka dancer and choreographer debuted Sky Dancers: The Quebec Bridge Disaster in Halifax as a part of the Prismatic Arts Festival.

The three-part dance draws inspiration from the 1907 Quebec Bridge collapse that took the lives of 75 ironworkers, including one of her own ancestors.

“I always took an interest in this story – this disaster – because my great-grandfather was one of the men who died on the bridge that day,” Diabo told The Eastern Door.

Near quitting time on August 29, 1907, after four years of construction, the south arm and part of the central section of the bridge collapsed into the St. Lawrence River in just 15 seconds.

Her great-grandfather Louis Sateiokwires D’Ailleboust was among the 33 Kanien’kehá:ka ironworkers who were killed. He was 36 years old.

“I think it is relevant to everyone how disasters can affect a community. One thing I want to point out is our resilience, how we’ve gone through it, but we’re still here,” said Diabo.

“I thought it would be really neat to do a dance piece on this because that’s my way of communicating – through dance.”

Diabo has been performing for over 25 years and currently practices both traditional and contemporary dance, with an emphasis on hoop dancing.

Using 33 hoops to honour each of the Kahnawa’kehró:non that died, Diabo said the first part of the piece focuses on the spirit of the bridge and story of what happened 109 years ago.

The second part shines light on Kahnawake’s rich history of ironworkers, using two male break-dancers to capture the playfulness and fearlessness many had while on the job, while the ending centres on the 25 widows and over 50 fatherless children that were in the community as a result of the disaster.

“I have three women dancers that represent the women left behind after the disaster, so we have three generations – a young girl, a young woman of marrying age and an older woman who could have had a son that was there,” said Diabo. “There’s sorrow, but there’s strength as well.”

Overall, the performance comes to life with the help of six other descendents of the men who were killed, including Diabo’s daughter, who will be singing a women’s traditional song, her brother Mike Diabo, who composed the music, dancers Marion Snow and Brenna Alfred, and researcher Cathy Rice.

For Rice, the performance brings an important piece of Kahnawake’s history to a brand new audience.

“Despite this tragedy and a tremendous loss to their community, Kahnawake men, with the support of their families, continue to travel, perfect their trade and gain an international reputation as the best and the bravest high steel workers in the world,” said Rice, who sits on the Quebec Bridge anniversary committee.

In 2007, the committee erected a memorial monument by the recreation path for the 100th anniversary.

“The story of the Quebec Bridge is an international event – it’s not only about Kahnawake. There were Canadians and Americans that lost their lives too and not too many people remember the story, and it’s important to get that information out to not only our community, but larger outside communities,” said Rice.

The organizers behind the Prismatic Festival thought so too.

“Barbara is a big part of the program this year,” said Raeesa Lalani, communications and marketing manager for the festival.

“A part of the Prismatic Arts Festival is showcasing multi-disciplinary art forms, but one her statements that describes her piece is called bridging the gap, and we use that as our theme for this year’s conference to engage the public and stakeholders in conversation.”

As a featured artist, Diabo took part in a panel discussion following the performance. She was joined by historians and members of the engineering community to explore how the Quebec bridge collapse affected different communities over the past century.

As for the performance, Diabo said she hopes to eventually show the piece in Kahnawake.

“I’d love to perform it in our community, expand on it and tour with it all over the place,” said Diabo.