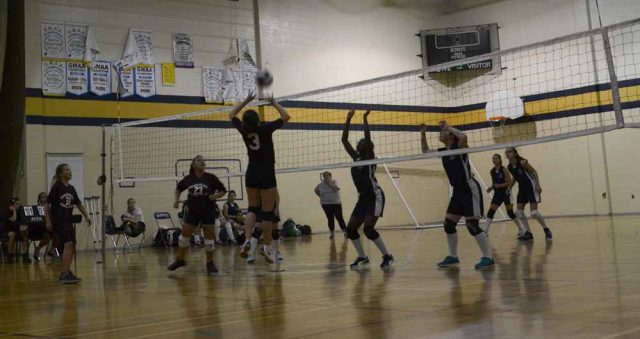 Kahnawake Survival School’s volleyball squad won its first ever GMAA championship last season, and a crew of new and veteran players caught their first taste of the court last week. Work remains to be done thought the talent is clear. (Daniel J. Rowe, The Eastern Door)

The 2015 GMAA Juvenile girls’ volleyball champions from Kahnawake Survival School laced up and smacked their way back onto the court Tuesday, at Howard S. Billings’ very hot and humid gym.

Survival won its first female banner outside of wrestling last year, and is looking to a blend of new and experienced volleyballers to lead them back to another championship.

The first opponent of the three-match tournament was the host team, and KSS showed signs that it could take the first game, but some timely serving from Billings gave game one to the blue and yellow, 25-23. Billings rode the momentum built from the first game and won easily 25-12.

Next up: Trafalgar, last year’s runners up.

Survival showed its skill in serving in the first game, and led by quality overhand power serving from Taierahkwenhawi Montour and Iaonhátie Deom, KSS won 25-21.

The first point of the game proved the highlight when 12-year-old Iewenniiohstha Montour (Taierahkwenhawi’s little sister) hit an overhand spike that scored to make it 1-0, bringing cheers from her teammates and fans in the gym.

“It felt pretty nice that I got the point,” said Iewenniiohstha.

Trafalgar bounced back in the second game and won 25-19.

The third match was against the Study, and Survival again controlled the first game, winning 25-20, but failed to ride its momentum, narrowly losing the second 25-23.

“It was pretty good,” said Taierahkwenhawi of her team’s first performance. “This team is way different from the other ones, but I think it can turn into something amazing.”

The 15-year-old learned to overhand serve over the summer, which gives Survival another weapon from the service line. Lakota Norton and Iawenhontsaieshon Peterson-McGregor also put in some impressive service runs over the three matches.

“Passing was good, serving was good, but needs a little work,” said Taierahkwenhawi, who added that players need to learn to call the ball more.

The elder Montour will now be counted on to help the younger grade seven and eight players just learning to play the sport, much like the older players did for her in past years. Taierahkwenhawi is eager to fill the role.

“They’re adorable,” she said. “Just having them there and putting all their heart into it is just adorable.”

Survival is back on the court on Tuesday, October 4 at home, and will play the same three teams.

It was only a matter of time before Kahnawake Survival School tapped into the inherent soccer talent in the community and fielded a team in the GMAA.

The KSS Juvenile girls hit the pitch last Tuesday at King George Park in Westmount to take on Miss Edgar and Miss Cramps School (ECS), which had two wins and zero losses heading into Tuesday.

Survival played solid for its first-ever game, but was overrun by ECS’s established players and lost 4-0.

“The other team was stacked with soccer players, unlike us,” said midfielder Tiakotierenhton Diabo. “We only have five players who actually play and the rest have never played before, but I think we did pretty well for our first game, despite the score.”

The rookie team will have its homecoming tomorrow afternoon (September 27) when JFK High School meets the girls at the Kahnawake Survival School field.

Diabo, an experienced soccer player, sees the newbies on the team have potential, but just need to fine-tune aspects of their game.

“They’re good, but just need to practice a little more on shooting and passing and pressuring the players, and being able to take off and get back and help out when it’s needed,” she said.

“Other than that, they have their basics down. It’s just a matter of improving. Even the ones who are experienced need some improving and protecting, including me.”

It seems a no-brainer that KSS would field a female team, as Kahnawake has proven over the past decade and change that it can put a quality team together or two.

Diabo, along with fellow veterans Ietsistohkwiio Delisle, Iakaonhawinon Mayo, Meadow Rice, and Iehwatsirine Reed, who have tone up pitches in Kahnawake, Chateauguay and elsewhere for years, are ready to join those taking their first tours of the soccer field, and make the most of the season in the Juvenile Girls 3B division.

“We’ve been struggling to get a team for a while, but there was never enough (players),” she said. “Now, we finally do, so it’s pretty awesome.”