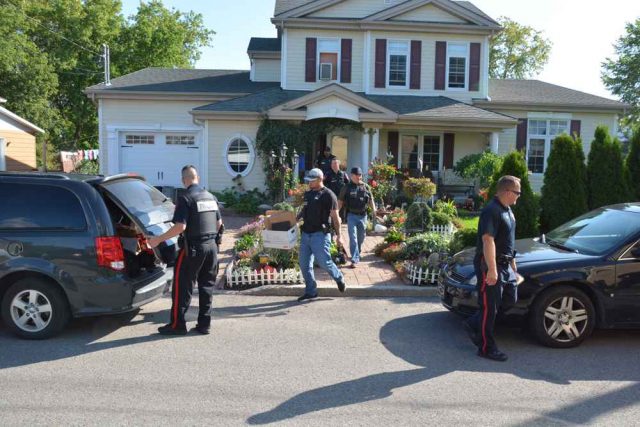 The Kahnawake Peacekeepers carried out a search warrant at a residence in the area of the Mohawk Council of Kahnawake on September 9. (Peter Phillips The Eastern Door)

An anonymous tip about possible drug dealing in the area of the Mohawk Council of Kahnawake led to the arrest of two local males, along with a large number of narcotics seized by the Peacekeepers.

A section of Curotte Lane was closed off throughout the afternoon as the Peacekeepers executed a search warrant at their residence.

“The homeowner has not been charged with any crime,” said Diabo.

A large number of suspected methamphetamine, crack cocaine, 28 grams of Marijuana and a small amount of cocaine were seized as a result of the search.

The bust is a result of an investigation that stemmed from an anonymous tip about possible drug activity in the neighbourhood.

The file was opened on September 2 and surveillance was conducted over a two-week span. During that time, investigator Larry Beaton observed drug transactions and obtained a search warrant for the residence and arrest warrants.

“I’m happy that they found something in the house because this has been going on all summer. At least this little neighbourhood is safe now because there are a lot of little kids who live in this area,” said a neighbour who wished to remain anonymous.

“Anytime that the PKs are successful in busting drug dealers, I think is a great thing for the community because as we all know, drugs hurt not just the person taking the drugs – but the entire family as well.”

Both Borello-McPhail and Curotte had a bail hearing on last Tuesday morning.

“If it was up to me I would seriously consider banishment for these dirt bags that are poisoning our people,” Mohawk Council of Kahnawake chief Carl Horn told The Eastern Door.

“I don’t want to promote people taking matters into to their owns hands, but if this trend continues a men’s group should be formed to confront some of these drug dealers.”

Horn, a former Peacekeeper, has held a strong zero-tolerance stance against drugs in the community.

“I am not surprised at the type of drugs seized, these types of drugs are very common in our territory,” said Horn. “Obviously it’s something I’ve spoken about in the past, we have to slowly eliminate the demand, with education and prevention.”

Friday’s bust marks the sixth time The Eastern Door has reported the Peacekeepers seizing drugs in the past six months.

“It is highly addictive. What happens is that the high is very intense, but it is short-lived.”

Despite its highly addictive nature, crack, as well as the other types of drugs seized on Friday, are not “at the top of the list” in terms of requests for treatment services in Kahnawake.

A growing concern among frontline workers is the dangerous effects of opioids like fentanyl.

“Crack, cocaine, or stimulants – yes, they’re detrimental and are really bad and highly addictive, but they’re not as dangerous in the sense of that immediate danger to put you at risk of overdose and death,” said Samayoa.

“When someone enters that substance-use lifestyle, it a risk, especially if you buy pills that are distributed on the street – they don’t come with labels or warrants.

“That’s a very risky practice because you don’t know what you’re getting. It could very well be fentanyl.”