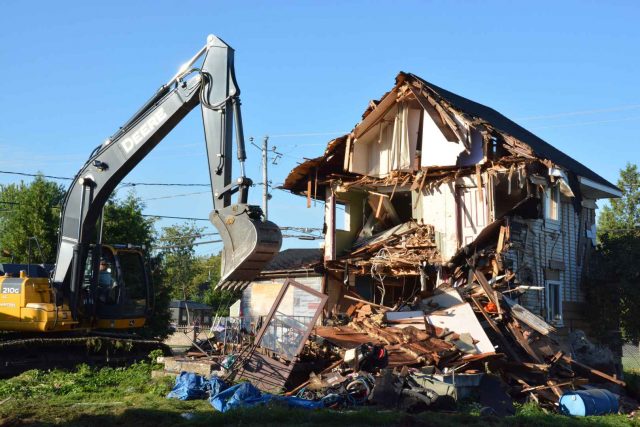 There is so much history in many old houses in Kahnawake that’s sometimes forgotten, oftentimes left unexplored, until they are torn down. (Steve Bonspiel, The Eastern Door)

By: Paul Graif, The Eastern Door

As far as anyone in Kahnawake can remember, the old Laforce house has been around since 1935, around the time the surrounding neighbourhood began to develop. It torn down on Saturday.

Its significance to the community can not be ignored. It was known as the Laforce Tourist Home, and was home to residents who would board there for anywhere from a week up to a year at a time. The owner from around the 1940s to around 1976 or so was Louise Laforce.

Kenneth Deer says that Mrs. Laforce was a well respected member of the community when he was around 10 years old in 1948.

He even used to do odd jobs for her, such as bringing her the Montreal Gazette on Saturdays and cornbread and steak on Sundays.

“She was tall and stately. She was a lady in the true sense of the word,” Deer said.

Deer says his Grade 6 teacher lived there for the entire school year.

Louise Laforce had the house bought for her by her uncle, according to Billy Two-Rivers.

Atroho Laforce, according to Two-Rivers, bought several homes in the community and distributed them amongst his family.

Atroho was a well-known medicine man at the turn of the century according to what Two-Rivers was told by his family.

“Years ago our people who had skills in medicine took some beadwork and went on summer trips to the United States and in Ontario,” he said.

Laforce did a lot of business in the US and was able to amass a small fortune, allowing him to buy up a significant amount of land in Kahnawake in the 1920s and 30s.

Two-Rivers knows a great deal about the Laforce family because the lots Atroho built on were adjacent to his home.

“He acquired some properties. There was that vacant lot across from my house, and another three doors from my mother’s place. He had a tract of land at the Seaway too. It was all distributed to the Laforce family.”

Two-Rivers said Atroho amassed a small fortune, even after purchasing all that property and building several homes.

Two-Rivers has fond memories of Louise.

“She was a businesswoman, plain and simple. There were no airs about her. She was friends with my mom. She was just a regular person who fell into an opportunity to open a tourist house,” Two-Rivers said.

Andrew Delisle Sr. says the home wasn’t very big when he was growing up, but it was three storeys.

“The front was an addition. It was 30 feet by 30 feet before she fixed it up. The porch was added in front recently, about 15 years ago,” Delisle said.

Two-Rivers says Kahnawake brought in a star lacrosse player in the 1950s from British Columbia and he lived in the Laforce house from April to October.

“He used to cut the grass, do some yard work, go to the post office and get some groceries for her while he lived there,” Two-Rivers said.

“The house was always well kept. It seemed nice.”

Huron chief Max Gro-Louis also stayed there at one time.

But after 1976 it was no longer a boarding house and it transferred ownership several times.

Delisle believes that Graydon Nicholas, the first-ever Native Lieutenant Governor of New Brunswick between 2009-2014, stayed in the Laforce house when he came to Kahnawake in the 1970s for work.

The rich history of the Laforce Tourist Home comes mostly from memories and word of mouth. And now it will only be seen in old photographs.