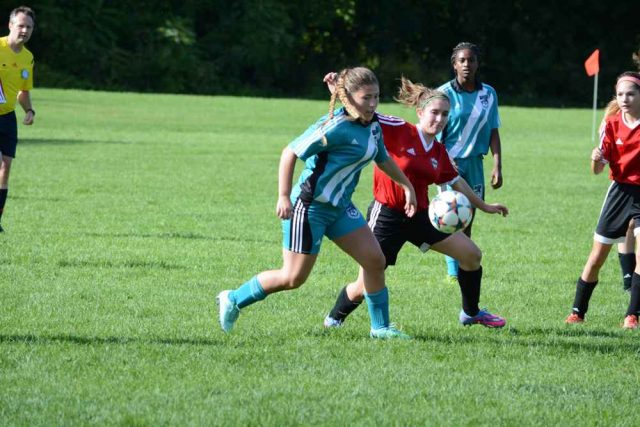 Kenzie Kane was rock solid at left back for the Chateauguay Cougars’ gold-medal winning side that fought (literally at times) to the end of extra time to take the title. (Daniel J. Rowe, The Eastern Door)

For the first year, no Kahnawake Mohawks female soccer teams came away from the ARSS Sud-Ouest regional playoffs with a medal.

That did not mean, however, that no one from the community had a shiny amulet dangling from their necks in the end.

The sole team vying for a medal finish was the Under-16 Kahnawake Mohawks that lost a heartbreaker against the Chateauguay Cougars U15 side, 4-2 in the bronze medal game.

The Mohawks never had a full 11 on the pitch, but still looked poised to nab the game with 10 players when a wonder strike off a free kick from Cougar Haley Vinski put the Cougars ahead 3-2.

The tired 10 girls, coached by Angie Marquis and Bronwyn Johns, did not have the legs in the end, and walked off the field tired, proud, but sans medal.

“Crazy, long, tiring,” said forward Molly Huntington, when asked how the game was playing shorthanded, while the Cougars had over a half-dozen subs.

Tiakotierenhton Diabo played keeper for the first half and did not stop running until the final whistle.

“They’re fast and sometimes they got through, so I figured it’s my job to run everywhere,” said Diabo. “At the beginning I knew they had an advantage because they had full lines, and new legs coming out every single time. We didn’t even have a spare.”

The loss was more frustrating, as the team is not lacking for quality, and lost star striker Kyla Morris, who was tackled by an Ormstown defender earlier in the season resulting in a torn ACL.

“It gets frustrating because we can do it, we’re good enough,” said Huntington. “We barely had spares the whole year.”

The U16 Chateauguay Cougars, anchored by Kahnawa’kehró:non keeper Cedar Lazare and stalwart defenders Kenzie Kane and Jaylin Rice-Douglass, fought a tough Ormstown U16 team off and sealed a 3-1 win in overtime to take the gold medal in the division.

“I feel really good because our team has been working really hard all season and to come out on top is the best feeling,” said Lazare, who made a crucial stop in the second overtime with the score 2-1 to keep the Cougars on top.

In soccer, overtime is two short halves with no sudden death.

“The last save was an intense one because it was the last two minutes in OT, and she had a breakaway, so I couldn’t let her in my box,” said Lazare.

The save came moments after Kane picked up her second yellow card and was showed red, forcing her to watch the final moments on the sideline.

With the game knotted at ones, and intensity rising, a red card was not surprising, especially for someone who plays with Kane’s tough brand of defence a la Giorgio Chiellini.

“The first half was not too bad then the second half came and that’s when it started to get rough and such,” said Kane, whose first yellow came from a thumping tackle midway through the second half.

Kane and Rice-Douglass were huge the entire game and rarely had a moment to breath as they battled back a determined Ormstown offence.

The U16 Cougars beat the Mohawks in the semi-finals 3-0.

Lazare spoke about her reason for joining the U16 Chateauguay team in lieu of the Mohawks’ squad.

“I was already playing for Chateauguay last year for AA, but I just stayed because the girls I played with last year are very good, and work how a team should work together,” she said.

Kahnawake was represented in the younger divisions Sunday, as well with coach Marissa Leblanc manning the helm at the silver-medal winning U9 Chateauguay Cougars that count up-and-coming star Adysson Stacey (Leblanc’s daughter) among its roster of young talent.

It was the first time coaching for the soccer mom, and after some initial nerves fit right in as bench boss.

“I adored it,” said Leblanc. “I was always afraid of coaching because I knew I’d really get emotionally involved given I love the sport so much myself. I knew it would be a long-term commitment once I started. It ended up being the best move I’ve done in a while.”

Kahnawake’s soccer stars were not done there.

Watewennenhawihtha Goodleaf found herself between the Mohawks U16 and U12 teams this season, but decided to lace up and play for Chateauguay’s U14 team that took bronze against Ormstown, winning 5-0.