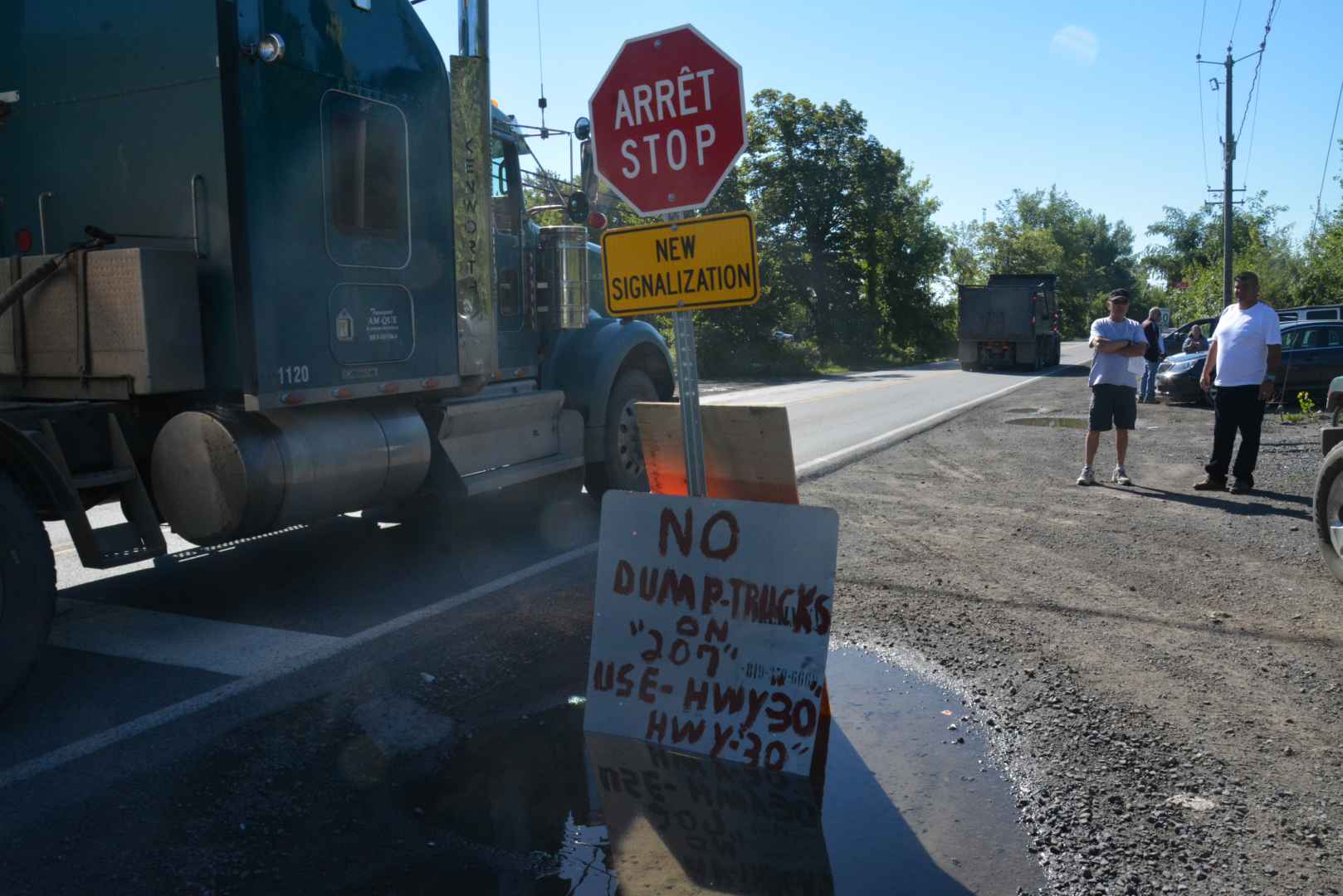 About a dozen community members participated in a small protest Friday morning to voice their concerns about the traffic, noise and trucks on Route 207.

Residents along Route 207 took to the side of the road to express their frustrations and concerns with the amount of traffic, trucks and noise in the area.

“These trucks should not even be here. We are the number one – we are the Natives. Not the trucks, not the businesses. It’s us as individuals who should be respected,” said resident Alan Paul.

On September 2, a truck ban came into effect on the road, with exception for permit holders and local deliveries.

The Mohawk Council of Kahnawake (MCK) passed a directive, stating that all trucks going to and from the JFK Quarry were deemed as local deliveries until the end of the month.

The company uses Route 207 to deliver stone to the Turcot yards for the ongoing infrastructure project in Montreal.

“We have to account for the distance and time spent in traffic for the trucks carrying materials to the site. When trucks are sitting in traffic because of changes to their route, contracts are lost to suppliers whose trucks are able to supply the site faster,” said JFK owner Frank McComber.

“The next month is going to be busier than normal for JFK as we extend our staff’s hours to meet demand during the “blitz” period. We’re pretty excited that a Kahnawake business has been chosen to supply such a massive job and if we can meet their expectations on time and within budget, it can only be positive in terms of future opportunities,” said McComber.

The blitz will be similar to the one the Mohawk Bridge Consortium has scheduled for the past four years to get a major section of the Mercier Bridge completed in as quick a timeframe as possible.

The MCK also authorized the quarry to operate every day for 30 days.

“The ban was put in place to stop trucks from using the 207 as a quick bypass to the Mercier Bridge, not to stop local businesses from operating,” said grand chief Joe Norton in a press release issued by council last week.

Norton told The Eastern Door two weeks ago that council had to find a “happy medium” between businesses and residents on the 207, and that council was looking to accommodate the business, so it would not lose its contract.

JFK pays 56 cents per ton to the MCK in royalties, amounting to around $3 million over the past eight years.

However, Paul said he was upset about council’s lack of consultation with residents.

“We’re not against the business, but we’re against the trucks that are coming in,” said Paul.

Others expressed concerns about safety on Friday.

“These trucks, they won’t even move over. There’s no place to ride your bike. I complain at least once a week,” said Darren Jacobs.

“Why are all these dump trucks on this road? I can’t even ride my bike or walk – I have to go through the back now. I’m surprised I didn’t get bumped yet.”

Charlie Patton, who lives on, and owns Patton’s Glen just off the 207, said he felt conflicted about the newly installed stop sign near Kanawaki Golf Club.

“On one hand, I think it’s good because most of the time, there’s so much traffic that we can’t even get out of our driveway,” said Patton.

“But, now you have dump trucks and everything else – you hear those wheels squealing early in the morning. I live further away (from the road) so it doesn’t bother me, but my concern is people who live right there – the dust, the noise, the stress – they don’t need that.”

The Public Safety Commission erected a second stop sign near the home of Mary Deer earlier in the summer. She said it’s caused more of a disturbance to her daily life.

“Every time one of these trucks goes by, pulls out, stops, and releases all that garbage into the air – it’s in my bedroom, my living room, in my kitchen,” said Deer.

“Nobody cares because the people who make all the decisions don’t live here. I would rather just see them keep going.”

Micky Philips is a resident in the area. Although he didn’t attend Friday’s protest, he contacted The Eastern Door to express his frustration with the traffic.

“The truck traffic is phenomenal. It is completely unacceptable. It’s unsafe, it’s environmentally hazardous to everyone living on this road – air quality, air pollution, noise pollution,” he said.

“Anyone to give permission to some company to disrupt everyone’s lives on a daily basis has no right to do so, unless they live on this road to see what we go through.”

“If anybody has an issue or concern about the conduct or safety of trucks leaving our site, we encourage them to please contact us at the JFK offices with as much information as they can supply so that we can take fast, corrective action to ensure that any potential problems are put to rest immediately,” said McComber.

A kiosk at the Services Complex will also take place on Saturday and Monday.

“Everyone will have an opportunity with the consultation. We’re really trying to accommodate everyone here and that’s really what the consultation is all about – what are the issues and how do we find resolutions that will satisfy everybody,” said MCK chief Rhonda Kirby told.

Blast from the Past: Onkwehón:we at the Olympics in Montreal 40 years ago 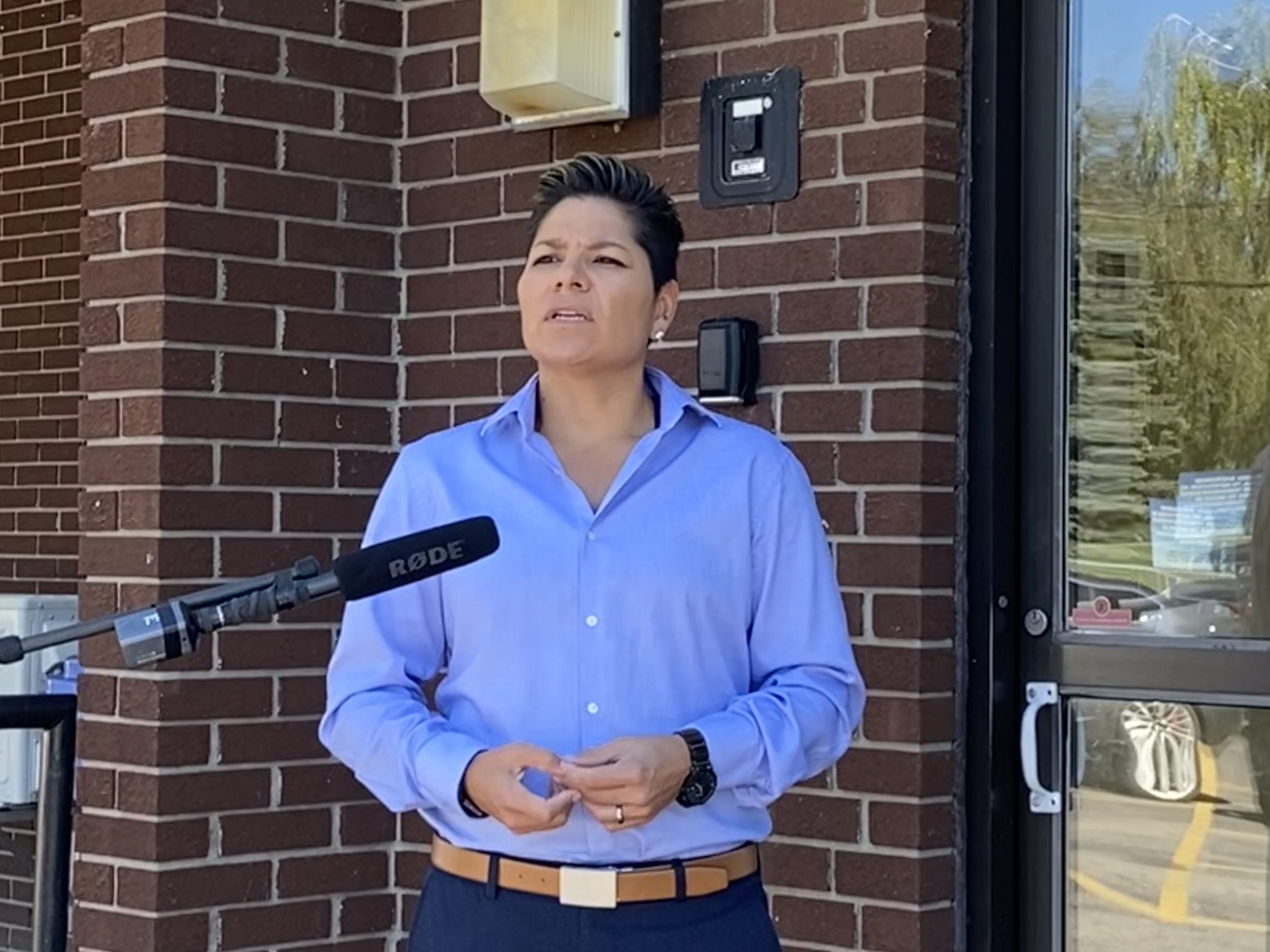