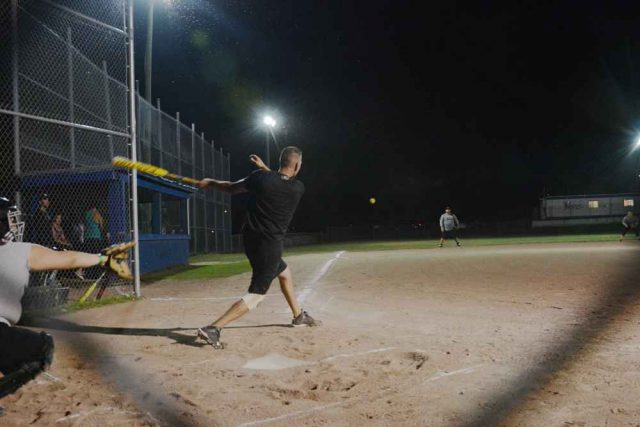 Carl Horn led Paul’s Cable’s offence and defence, but his team came up one run short and missed the finals for the first time in five years. (Daniel J. Rowe, The Eastern Door)

“This is where champions are made,” bellowed Central Station Yankees (CSY) hard-hitting outfielder Thunder Jacobs, heading into the top of the seventh inning with the game tied at 19 against Paul’s Cable in game two of the Kahnawake Mixed Softball League semi-final, with CSY up one game to nothing.

Win this inning and the Yankees win the series. Lose, and it’s rubber match time in the best-of-three series.

The rain was coming down, and top of the order on the menu, as up stepped Markie Kirby straight off a silver-medal finish at the President’s Cup with the Kahnawake Mohawks Senior B lacrosse team.

Kirby eyed a Kirby Lahache pitch, and rocketed it into left field and took off.

“I waited for my pitch and I knew it was going to Arontase Paul, so I knew that an inside the park was coming,” said Kirby. “Their left field was weak, so we aimed for them and we got the win.”

Rounding second, there was only one thought on Kirby’s mind.

Kirby beat the throw from shortstop Ky Horn, and put his team up by a single run. The Cable defence tightened after, and held CSY to a digit with some quality catches and pick offs.

Now it was the former dynasty’s turn to bat with the top of the order ready to play for the walk off, as the rain intensified.

“It was very stressful especially because of the rain,” said Central Station pitcher and captain Ryan Deer. “I had to hold them to get one run at least, so they wouldn’t prolong it, so the pressure was on.”

Did that just happen?

The half-dozen fans huddled in the scorer’s box under shelter all started asking, ‘has that ever happened? Has Horn ever struck out?’

Horn took it in stride and was overheard saying, “the bat slipped” walking to the dugout.

After a falling River Hemlock robbed Hank Delisle of a deep fly ball, there was one more out between CSY and a finals matchup against either the two-time champion Demons or Chris Montour Construction.

Ky Horn was patient at the plate and took a walk, and a Tommy McComber pop fly went straight into the weather between home and first.

“That last fly ball there, I looked up, and all I saw was rain drops,” said Deer.

At some point, Deer caught sight of the ball and cradled it into his mitt for the game’s final out.

The win puts the Yankees in the finals for the first time in the team’s history and knocks out Paul’s, who have been the perennial finals team, coming runners up in the previous two years.

Waiting for the Yankees in the finals will be the two-time champion Demons who dispatched a plucky Chris Montour Construction team Thursday night. CMC forced a third game after beating the Demons amid a very controversial run last Tuesday giving CMC the 14-13 walk-off win. The third game was all Demons bats and ended 20-9.

Demons won game one of the finals, and game two is tonight at 8 p.m.