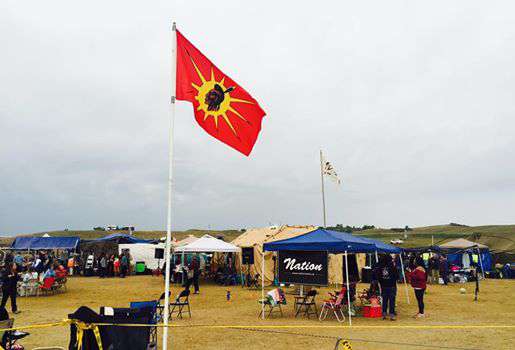 Another wave, so to speak, of Onkwehón:we from the north arrived this week at Standing Rock, North Dakota, where protectors of the land have been pepper-sprayed, attacked by security and dogs, and continue to build up support from across Turtle Island against a $3.8 billion pipeline.

The Dakota Access Pipeline (DAPL) has attracted, according to two people who are there whom The Eastern Door spoke to, a few media (including the New York Times), with representation from close to 200 Onkwehón:we nations.

“It feels like I’ve been here for weeks but only arrived yesterday,” said Gail Chamberlain, who is from Wikwemikong but lives in Montreal.

“I have the sentiment that this is where I’m supposed and meant to be, and I’m in complete disbelief and grateful that I get to be here! It’s like a huge family gathering,” she said.

Both ladies changed plans to come back north, and are staying for at least a few more days.

In addition, there is an area for prayers that is completely off limits to photos.

People who arrive every day are welcomed with open arms and the numbers are swelling.

The duo, along with a male passenger, Jeffrey Papatie, took 34 hours to get there.

“We were welcomed and given rules of no weapons or alcohol and there was the fire and people sitting around,” said Jacobs.

“I met a man when I was looking around near the kitchen. I told him we just got there and asked him some questions then he offered us to stay in a teepee for the night till we set up our stuff. He made us a fire,” she said.

Guards for those opposed to a pipeline on Sioux land volunteer and switch off regularly, to keep an eye out for overzealous security from the other side.

North Dakota governor Jack Dalrymple has activated the National Guard, 37 arrests have been made so far, and two Mohawk Council of Kahnawake chiefs are going to Standing Rock in the coming days.

Chamberlain said an abundance of food and water allowed her to purchase other things needed for the camp.

“I purchased a ton of rechargeables for phones and computers since everyone is always looking for a place to charge their devices,” she said.

Both got there by fundraising through a half and half draw and by selling squares – all of which sold really well to a community eager for news, and a peaceful outcome.

“The energy of standing together is strong once you get here,” said Chamberlain. “Everyone remains longer than they planned.”