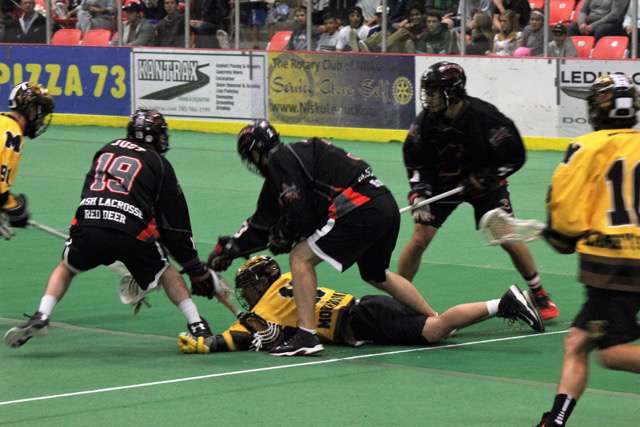 By: Brandon Bordeau, The Eastern Door

Finishing as the national runner-up is a great season for many teams, but for the Kahnawake Mohawks, however, their sights were set for a title.

The 2016 President’s Cup national Senior B lacrosse championship took place last week in Leduc, Alberta last week, and with a 2-1 round-robin record, the Mohawks earned a bye into the semi-finals.

Kahnawake had last Thursday (August 25) off as they prepared for either the Brooklin Merchants or Tyendinaga Thunderbirds. Brooklin won its crossover 13-5, and the Native Sons took down the Calgary Mountaineers 15-8 in the other crossover. This meant that Kahnawake would battle Brooklin, and the Sons would take on the host St. Albert Miners.

On Friday, Kahnawake flexed its defensive muscles early as the Merchants were shut out in the opening frame. Meanwhile, offensively, Pat Saunders scored twice and the Mohawks led 2-0 at the end of the first.

During the second, Brooklin still couldn’t find much offense although they did cut Kahnawake’s lead in half on a goal by Chad Levick.

Saunders came right back, scoring his third and the score was 3-1 entering the final period of play. Saunders struck again early in the third, giving the Mohawks a 4-1 lead before Jonas Derks cut the lead to 4-2.

Peter Jacobs and Callum Crawford (twice) put the game out of reach by scoring the next three goals. With the score 7-2, the Merchants scored two late goals, but it was not enough as the Mohawks punched their ticket to the gold medal game with a 7-4 win.

Only one opponent stood between the Mohawks and the team’s first national championship: the host St. Albert Miners, who defeated the Native Sons 14-5 in the other semi-final.

Mohawks’ assistant coach Jim Milligan and defenseman Ky Horn both had confidence going into the final.

“As long as we keep doing what we’ve done all year, we’ll get good results,” said Milligan. “Our depth is one advantage we have.”

“One of our strengths is our depth” said Horn. “Defensively, everyone contributed today. That’s why we’re playing in the gold medal game.”

Prior to the gold-medal game, the Native Sons were taken down 13-10 by Brooklin in the bronze medal game. Jamie McComber scored two breakaways goals in the loss, and the one team that was considered the “unknown” of the tournament finished in fourth place.

Keegan Bal, Richard Lachlan each scored twice and Darren Kinnear added a single to put the hosts up 5-0 after the first.

The Miners weren’t done there. Three more goals to start the second prompted a switch in goal as Alex Fortier replaced Angus Goodleaf.

The Mohawks called a timeout and looked like the championship was decided. Kahnawake summoned the heart of a champion, however, as goals from Karakwanoron Two-Axe, Saunders, Markie Kirby, Nick Angus, and Pete Jacobs trimmed the deficit to 8-5.

However, 28 seconds after the fifth goal, St. Albert scored a controversial goal in which Fortier had possession but the ruling was that the ball wasn’t in the crease. The Mohawks never recovered from this loss of momentum, falling short by a score of 12-7.

“We fell behind early, the guys deserve a lot of credit for continuing to battle, unfortunately that ninth goal was a tough one to give up,” said head coach Jamie Batley.

Despite the loss, coach Batley remained optimistic “all of our young guys improved this season. Our development will continue and our goal will continue to be winning the President’s Cup” he said.

The 2017 President’s Cup will be hosted by the Six Nations Slash of the Can-Am Lacrosse League.