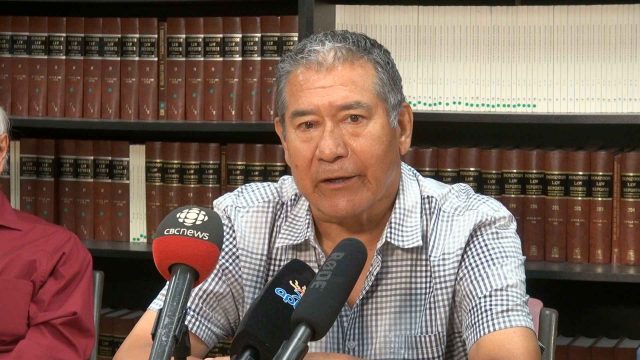 Mohawk Council of Kahnawake lawyer Francis Walsh along with council grand chiefs Serge “Otsi” Simon and Joe Norton (pictured) remind the public that pipelines without their consent and accommodation will not flow through the region. (Courtesy MCK)

The process is the problem for pipeline projects’ plugs being pulled, according to leaders in Kahnawake and Kanesatake.

Multiple leaders from Kahnawake, Kanesatake and Akwesasne came out against the National Energy Board (NEB) process that was set to hear intervener testimony on TransCanada’s proposed Energy East pipeline project in Montreal this week.

Is there any way a pipeline will receive the consent of the Mohawk Councils in the region?

“I see that as a hypothetical question at this point,” said Mohawk Council of Kanesatake grand chief Serge “Otsi” Simon at a joint press conference Monday. “We haven’t even agreed on the process yet. The pipeline we’re looking at right now is hypothetical, so right now I’m not even thinking about that.”

Simon spoke in lieu of an energy board hearing on the project that was cancelled Monday and Tuesday after protests broke out at the hearing.

He, alongside Mohawk Council of Kahnawake grand chief Joe Norton, elders and lawyers from both communities, as well as Mohawk Council of Akwesasne chief Joe Lazare, made statements and took questions on the NEB process and the position of the communities related to Energy East and any other project in the area.

“If the government wants to consult with us and accepts the possibility of a ‘no,’ we might have a legitimate process on our hands,” said Simon when asked what it would take to get approval for a pipeline project. “I haven’t seen one yet.”

Norton agrees, wanting the process changed to put both governments on an equal footing.

“Somebody else writes the rules all the time, and then they expect us to find our way within those rules and regulations or policies,” Norton told The Eastern Door. “The only way we can really participate in anything, in general government has to learn how to sit down with us and rewrite the rules with our involvement sitting at the table.”

Simon and Norton had planned on testifying at the NEB hearing this week in Montreal, but the hearings were canceled due to protest.

In the press conference Monday, both spoke of their distrust of the hearings, but wanted their positions heard by the general public.

“It is our duty and responsible that we remind the public in general and not just the politicians, not just the special interest groups such as NEB, who we don’t have very much faith in in terms of the responsibility they’ve been given by the government of Canada, to go about their business and try to convince people that this is the right thing to do,” said Norton.

“It was more that we know that the hearing process was going to be live streamed to the public in general and that was our target, not the NEB. Their minds are set. They know what they want.”

Many have come out against the proposed pipeline – which is still in the planning stages – including Montreal mayor Denis Coderre, who was prepared to testify Monday before the hearings were stopped.

“We do appreciate the fact that there are now leadership in the region that are taking a position that bolsters our particular situation,” said Norton.

MCK’s lawyer Francis Walsh said council was prepared to make legal arguments this week about the scope of the NEB process, as planned by the board and Canada.

“And to provide arguments of why direct engagement and consultation with the government, with the crown, was required as opposed to simply relying on the energy board process,” said Walsh Monday.

Walsh added that Kahnawake sent a letter to the newly elected government of Justin Trudeau requesting the energy board process be changed.

“We had requested they start the process over again after they do a review of the Energy Board Act,” he said. “The government refused and said they would do additional interim measures to ensure additional consultation of First Nations, but so far, on the ground, we don’t have concretely any idea of what that means.”

Simon and others have railed about the energy board process’s legitimacy. He was asked about the flurry of criticism between two of the board’s commissioners meeting with former Quebec premier and federal Progressive Conservative leader Jean Charest.

“It shows you what a circus this whole process has been, and I was going to boycott it altogether, but my legal counsel said, ‘you know what. You’re better off sticking to the process,’” said Simon. “It’s better than just boycotting.”

Consultation remains a key sticking point for all Mohawk communities. Simon and Norton repeatedly said the federal government, not the NEB, is who needs to consult Onkwehón:we communities.

“What kind of consultation are we looking at, and what would we consider as a legitimate seeking of our opinions?” said Simon.

“The crown has to understand that sometimes the answer might be, ‘no.’ It’s our land. We have every right to say yes or no if a project is going to go through. Until we see a process like that, I think we’ll remain at a stalemate.”

Norton reiterated the MCK’s responsibility to take care of the land and health and safety of the people within the territory, Native and non-Native alike.

He brought up the Two-Row Wampum treaty and the continued importance of the implications related to the historic treaty.

“It legitimized your forefathers’ existence here,” he said referencing the mainstream media at Monday’s press conference. “And not the other way around. In doing so there was the opportunity to share the land, to share the abundance of all the natural resources and things that were here.”

Norton added that the exploitation of resources for the benefit of companies is “totally unacceptable.”

“The territory must be protected for future generations,” said Norton. “We keep in mind the Two-Row Wampum, which predicted that there would be a continuation of your ancestors in our territory, and therefore we’re also protecting your future generations and not only ours.”

Simon added a personal story to illustrate his point in being so vocal against Energy East and other pipeline projects.

“My three-month-old grandson was just born not long ago, and I see what’s happening to the world, and what kind of potential world he’ll live in when he’s my age,” said Simon.

“I’m not very encouraged by what I see if I look even one generation ahead, let alone seven. If we continue on this path of what they call progress, it’s going to kill every last living human being on this planet within three or four generations.”

Simon added that he was hopeful better minds will prevail in all communities.

Hearings will not resume until the energy board makes a decision about the two commissioners who met with Charest.