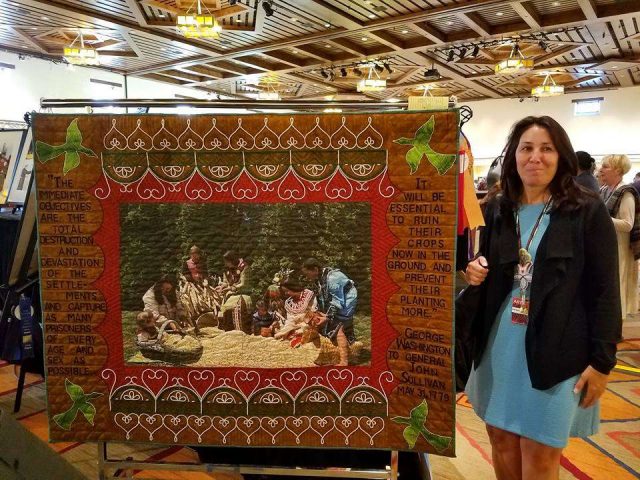 The 65 by 58 inch quilt, titled “We Remain Haudenosaunee,” lends a piece of history that many Kahnawa’kehró:non have little knowledge of.

“I wanted to speak to the issue of Sullivan’s Campaign. I started to ask some of our own people – what do you know of Sullivan’s Campaign? People who I thought should know. They didn’t know. I was stunned,” said Hemlock, a textile and diverse artist. “It’s such an important history for us, for Haudenosaunee people.”

The 1779 Sullivan Expedition was an extended systematic military campaign during the American Revolutionary War against Loyalists and the Haudenosaunee who had sided with the British.

Hemlock’s quilt features a photograph she staged with seven of her family members, while excerpts from a 1779 letter from George Washington to major general John Sullivan frame the edges.

“It’s something that I played around with because it’s something I’ve never done before,” she told The Eastern Door. “Once I did the photo, I gave it to a good friend of mine and asked him to do a digital print of this on cloth. We tried three different types of cloth until I was satisfied.”

The reverse side includes more excerpts from Sullivan’s report to congress.

“George Washington orders the total destruction of the Haudenosaunee/Iroquois homelands. This became known as the ‘Scorched Earth Campaign.’ Sullivan reports to Congress that 40 villages, 160,000 bushels of corn, all the food supplies, fields and orchards have been destroyed. Historical records report nearly 60 villages were destroyed. Through the hearts of the Women, the People refused to be destroyed, and we remain Haudenosaunee,” it reads.

“I want to extend my congratulations to the 2016 Best of Show winners. It’s exciting to see how Indian Market keeps evolving to attract established and new artists from over 230 tribes.”

The innovation award is given to an artist who has taken creativity to a new level.

“It is a pretty special award,” said Hemlock. “The judges go through the entire room, so you’re up against every single item in the room and they choose one.”

Hemlock is the ninth person to receive the Bernard Ewell Innovation Award in SWAIA’s history.

“I know the previous nine people who received it and I’m just in awe to be in the same category as them,” said Hemlock.

Indigenous people from across Turtle Island flock to Santa Fe every summer for the Indian Market.

This year marked the first time Kawennáhere Devery Jacobs attended the annual event to check out the art, fashion and short films that were screened.

“It gets your projects out there, you connect with other people in the industry in the hope of collaborating together in the future, and you have the opportunity to meet other filmmakers from up-and-comers to legends,” said Jacobs.

Jacobs, an actress and emerging filmmaker, also was in the area to shoot Kickstarter promo material for a new feature film she’s set to work on.

“The filmmaker is Gabriel Steven Mozart Abeyta, and his script Beginnings of my Heart went through the Sundance lab,” said Jacobs.

“It was so inspiring to see so many different Indigenous artists coming together and connecting. There were panels from the Sundance Institute, and there’s a happening film scene. I had so much fun.”

For Hemlock, the experience was similar.

“You get so inspired by the artwork there. It is just incredible,” she said.

The response was equally positive toward her quilt.

“A good 95 percent of the people who came by knew nothing about this history and who were more than happy to hear about it,” said Hemlock.

“We Remain Haudenosaunee” will be on view at Calico Cottage from September 6-20.

“After that it will be going off to a wonderful museum for its permanent home. Unfortunately the museum will be the one that makes the announcement,” said Hemlock.