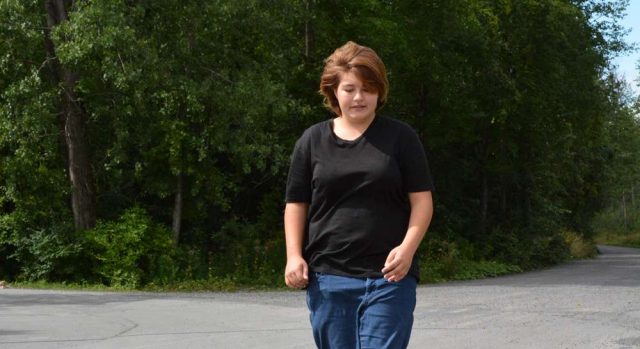 By: Kaidence Douglas, The Eastern Door

When I was in second grade I would write my letters backwards and spell things differently, which would make sense to me, but not to the people around me.

A doctor said I had dyslexia and did not understand what it meant till I asked my mom, she explained and said, “you just have to work harder then the other kids,” and I do, I try so hard but don’t always get the marks that I want to get.

I tried so hard on every piece of work I did but they would still say, “You’re not trying your best.” They don’t know how hard it is for me and how hard I’ve been trying. When you tell me that, it’s like you’re saying I did not try at all, however, I did try and if I did not try there would not be answers on the paper.

By grade four I started to get anxiety and I thought (and still think) that people are saying in their heads, that I was and still am just not smart enough.

The kids in my grade did not understand what the word dyslexia meant, so I would have to explain it in the easiest way possible, but they still did not understand. All they knew was that I had to leave the class and go into a different room for more help.

I would hear the kids say that they wished they went with me to the other class that I got my help from. They got jealous of me but really I wish I were just able to stay in class and be like the other kids. However, if I did stay in class I would not understand what they were talking about.

I had to team up with a friend when a teamwork assignment was due, and there would be three types of people:

One of them says “just copy me since it’s hard for you,” or other ones won’t even look at me because they know I won’t help them, or the nice kid in class will explain and make sure I understand.

There was only one kid I knew that would help me make sure I understood.

I started making friends that had dyslexia like me, and I did not feel alone. When I teamed up with one of those friends who also had dyslexia, we both understood each other and it was easier for us to get the work done.

It was like when I worked alone I would be slow, but with my friend I would be fast, and I would understand it more since they would give clear examples, and we worked really well together.

Once I got to grade six, my mind changed and it got harder for me – studying for tough exams and the intense amount of reading we had to do. But what I was able to do best was writing. Every time I would write, I’d be the fastest and I would have written the most words in my class.

Sometimes I would even spend my lunchtime writing in a book, instead of playing sports or hanging out with friends. I would end up writing story after story and it would just make me happy to see this piece of paper that I filled with letters and words.

My disabilities, which also include ADD and ADHD, are not easy.

In certain classes I have been given the answer sheets because the teacher couldn’t be bothered to teach me.

Even then, my dylexia keeps me from learning properly.

The only thing I wish for in life is to see my work in a book or any form of publication so people get the message: just because you have something stopping you, does not mean you’re going to stop yourself from succeeding.

Writing this article, at 13 years old and heading into Billings High School, has made me feel more relief, knowing other people understand what I deal with every single day.