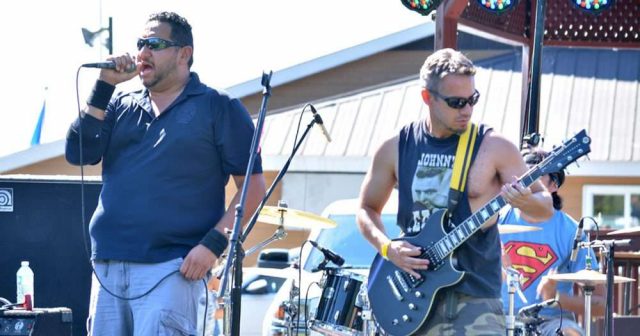 Several Kahnawa’kehró:non musicians, including the dudes from Dumptruk, hit the stages outside of the Kahnawake Marina on Saturday for the second annual Rock the Docks. (Jessica Deer, The Eastern Door)

The amps were turned up to 11 and the devil horns were up as dozens of Kahnawa’kehró:non flocked to the Kahnawake Marina last weekend for a day of rock, metal and punk.

Saturday marked the second annual Rock the Docks, a music festival featuring 21 bands from in and around Kahnawake.

“All the bands did an amazing job,” said organizer Ray Montour, who is also the bassist for Avery’s Descent.

He organized the event to inspire younger generations to become interested in playing music in a band.

“This year there was a great increase in the amount of interest from bands, I had to create a waiting list in case of any cancellations, which was almost as long as the actual lineup of the event.”

The jam-packed day kicked off just after noon with Ióhseres, while bands played half-hour sets all afternoon.

“I was happy to play and there were a lot of other cool bands there to meet and watch play,” said Ióhseres bassist Kyle Williams.

“We were the first ones on so there was a bit of pressure with the timing because the sound systems weren’t ready yet, and it was early so we were hoping people could make it that early, but everything worked out fine and it was another good piece of experience for us.”

“I’ve always loved the weird quiet beauty that winter has so I loved the idea of that name for the band. Of course we’re not very quiet though,” said Williams.

As the bassist for Avery’s Descent, Montour and his bandmates headlined the show along with Montreal’s Slaves on Dope. Both bands have albums dropping this month.

Rock the Docks coincided with the launch of their sophomore album Shadows In The Snow. Copies can be purchased at their shows and will be available online as of September 16.

Slaves on Dope are set to release its sixth full-length studio album Horse on September 23.

“Every title on the album is a drug reference or drug slang. But none of the song titles are actually in the lyrics of any of the song.

“It’s just a weird theme that runs through the record. The record deals a lot with addiction, coming out of addiction and changing,” said Jason Rockman, founder and front man of Slaves on Dope.

This was the second time the two bands have shared the stage for an all-ages free show in Kahnawake.

“We love coming to play there and we’d come back anytime. It’s always a good vibe. People are always really nice,” said Rockman.

“I have two kids and I brought them to watch us play, so that alone speaks volumes. A lot of the times when you play in a band, you’re in a club all the time where you have to be 18 and over to come, so if you have kids, there’s very few opportunities for them to see you play.

“When you have an event like that, it’s nice to have kids come out and watch their parents play.”

Montour said the original idea for Rock the Docks was about just that – “a fun family friendly event for the punk/metal/rock scene.”

“I wanted to give all the bands with members that have kids an opportunity to be able to bring their kids along and let them see what mom or dad does for fun,” said Montour.

The festival nearly doubled for its second year, with more bands, better equipment with the stages, sound system, as well as nearly double the attendance.

“I even was complimented that this year’s Rock The Docks gave the powwow some competition in terms of entertainment/attendance. But I’ll take that with a grain of salt,” said Montour.

He expects it will only continue to grow.

“As long as the support from the sponsors can continue, or even grow, I look forward to doing it for as long as I can,” said Montour.

“I hope to some day make the festival close to the level of Rockfest or Heavy Montreal.”