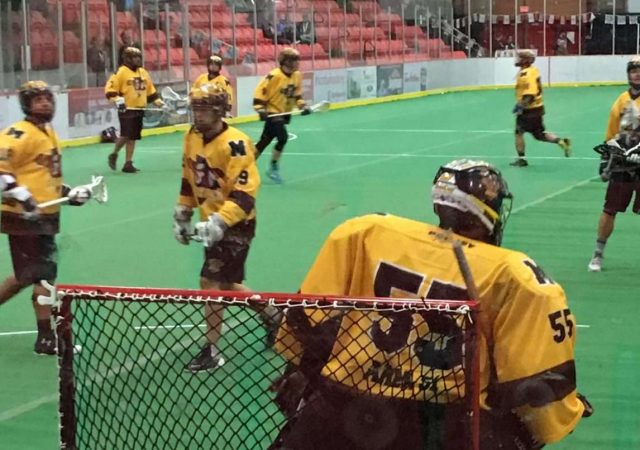 Angus Goodleaf is set to make good on his goal to bring a President’s Cup home to Kahnawake after winning one for Six Nations last year. (Courtesy Mel Squire)

By: Brandon Bordeau, The Eastern Door

A 2-1 record was enough to give the Mohawks a bye into today’s semi-finals and into a medal game; the big question is, which colour will they be playing for?

The Mohawks jumped on Langley early, powered by two goals from Pat Saunders, to take a 6-3 lead at the end of the first period.

However, the Warriors played a strong second period, using strong goaltending from Tye Belanger and timely goals to jump ahead of the Mohawks 8-7 by the end of the period.

The third period seen the Mohawks fight back, tying the game at eight thanks to a goal by Ky Horn. Langley came right back as Geordie Wells fired a low shot past Mohawks’ netminder Angus Goodleaf.

With under five minutes remaining, Markie Kirby buried his first of the tournament past Belanger to even the match at the nine, and the game went to a sudden death overtime.

Bryan Poole scored his fifth goal of the game with just over three minutes remaining to give the Warriors the win, and force the Mohawks to regroup for Tuesday’s game.

“We have to outhustle (Tyendinaga) tomorrow. We got outworked today. We need to outhustle our opponent. You don’t just win or lose a tournament with one game,” said defenseman Al Jones.

Tuesday provided the Mohawks with another nail-biter as they took on the Three Nations Lacrosse League (TNLL) champion Tyendinaga Thunderbirds.

Kahnawake jumped ahead 2-1 early on, and scored two goals in the final 40 seconds of the first as Pete Jacobs and Pat Saunders gave Kahnawake a 4-1 lead.

They built their lead up to 6-2, but Tyendinaga assured Kahnawake that this one wouldn’t be easy, trimming the lead to 7-6 by the end of the second. Kyle Alfred ripped a low shot past Trey Adams to put the Mohawks back ahead by two, but Tyendinaga tied the game at eight thanks to goals from Jordan Thomas and Tim Bergin.

Jacobs came back, giving the Mohawks a 9-8 lead, however, Tyendinaga went to work on a power play and once again Mohawks’ hearts were left to beat faster.

This time, Nick Angus picked up a loose ball and sent a beautiful pass up ahead. Jacobs beat Trey Adams to give his squad a two-goal lead. The Mohawks held on to win 10-9 and improve to 1-1 for the tournament.

Assistant coach Jim Milligan was quick to applaud Jacobs and Goodleaf: “We were feeling a bit of pressure. Pete’s goal was a big goal. Angus is solid, we have a chance every game because we have him in nets.”
The Mohawks final round robin game was another close battle, this time against the Can-Am lacrosse champion Native Sons.

This seesaw affair saw the Mohawks go up 8-6 after two periods, but the Sons struck back and crept within one goal early in the third.

The Sons, undaunted, went down fighting but fell short by a score of 12-10. Kasey Beirnes, who had gone goalless through the first two games, scored three times.

The victory, combined with Tyendinaga’s win over Langley, meant that Kahnawake would clinch first place in the second pool, and move forward to the semi-finals.

The Native Sons finished in second place, and Tyendinaga finished third with Langley being eliminated. The Sons and Tyendinaga needed to win crossover games last night after press time against Calgary and Brooklin respectively, to advance to the semis.

Mohawks veteran Markie Kirby said “everyone is a little banged up right now. Hopefully the extra day helps us. We could all use some rest.”

Kahnawake plays its semi-final game tonight at 6:30 p.m. against an undetermined opponent.