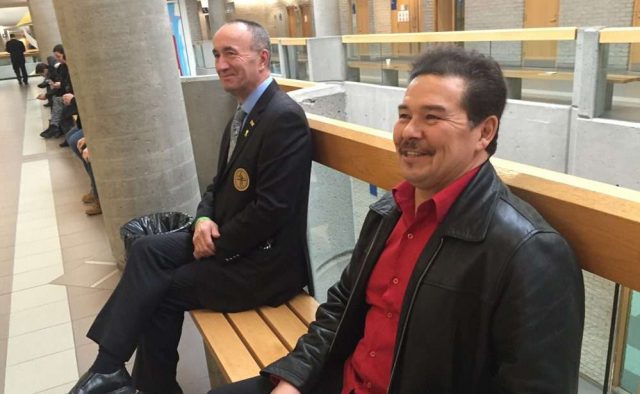 Johnny Jacobs was given a reason to smile this week when judge Marie-Claude Armstrong found in his favour in a suit he filed, for wages owed against his former employer Mohawk Painting and the Mohawk Bridge Consortium. (Daniel J. Rowe, The Eastern Door)

The ruling is in and the Mohawk Bridge Consortium was ordered to pay ironworker Johnny Jacobs $133,141.69 plus legal fees after a Quebec judge found MBC failed to pay Jacobs the wage he was owed, while doing fabrication work at Mohawk Painting for the Mercier Bridge re-decking project.

Attorney Richard Letendre represented Jacobs over the weeklong trial that wrapped in January, and the ruling came out on Monday.

He argued Jacobs was employed by MBC and entitled to the wage listed in the 2008 Fair Wage Agreement for the resurfacing work on the bridge between the consortium and the Mohawk Council of Kahnawake.

Jacobs primarily worked in consortium partner Sterling Deer’s Mohawk Painting shop, and MBC’s legal team, led by attorney Reevin Pearl argued that Jacobs was not physically on the bridge and thus didn’t fall under the agreement.

Between 2008-2011, Jacobs was paid $41.32/hour, according to the agreement, while performing work on the bridge, but a lower wage, while working at the shop.

The ruling relates the facts that Jacobs’ salary was not discussed prior to hiring and that he considered the $24/hour wage too low. Jacobs discussed his wage with his supervisor Kevin Montour, but MBC partners, the late Wayne Rice and Sterling Deer, maintained that the fair wage applied only to workers physically on the bridge.

Jacobs’ work on the bridge amounted to less than two percent of his time over the years.

According to testimony from former MBC partner Brian Goodleaf, he and fellow partners Peter Morris and Peter Rice thought shop rates should be equal to those in the fair wage agreement.

MBC bought out Goodleaf’s portion of the partnership in 2009.

Justice Marie-Claude Armstrong wrote in her ruling that between 2008 and 2009, Wayne Rice collected signatures from MBC workers declaring that their wages were fair, to keep the local 711 union off the territory.

Then-council grand chief Mike Delisle wrote a letter in July 2009 saying the petition was “filled with untruths and biased information,” and that “the band council had been informed that many of the workers have felt pressured by the tactics employed in developing the petition and were coerced into signing for fear of losing their jobs.”

Jacobs maintained that he did not see a copy of the fair wage agreement until he obtained a copy of one in May 2011.

He saw MCK chiefs Martin Leborgne and Mike Bush about his wage, and Sterling Deer called Jacobs and told him he should not have done that, according to testimony.

Jacobs’ employment was terminated in July 2011 due to shortage of work. Current MBC partner Amy Rice testified that her father (Wayne) told her this was the reason, but she did not know if this was the real reason, as read in the ruling.

Consortium engineer and project manager Guy Landry testified about a subcontract between MBC and Mohawk Painting, but could not provide details regarding the terms and modalities of such a subcontract. No document was produced in court.

The court ruled that MBC was paying Jacobs, and thus MBC was his employer.

“At all relevant times of Mr. Jacobs’ employment, all of the shop workers, including him, were paid by MBC,” reads the ruling. “Although she (Amy Rice) testified that her father – the late Wayne Rice – told her to list the shop workers separately in the pay records and eventually told her, at the time Mr. Jacobs was laid off, that he was a Mohawk Painting employee, this is not sufficient to conclude to an employment contract between Mr. Jacobs and Mohawk Painting.

In addition the ruling found that because MBC partner Peter Morris gave him a raise, and told Jacobs that he would be transferred from MBC to Sterling Deer directly in July 2011, Jacobs was an MBC employee throughout his years in the Mohawk Painting shop.

“The proof indicates that between 2008 and 2011, Mr. Morris was much more present at the shop than Mr. Deer,” the ruling reads. “Thus, Mr. Jacobs had most of his dealings with Mr. Morris and rather limited ones with Mr. Deer.”

Jacobs testified in court that he always dealt with Morris and never with Deer regarding his wages.

Amy Rice testified at the trial, but Deer did not. Both declined comment on the ruling when contacted by The Eastern Door.

“It’s not just a victory for me,” said Jacobs. “It’s victory for all the working men and women of Kahnawake.”

Also, the ruling reads the MBC was the sole contractor providing workers on the bridge, and that Mohawk Painting was not a contractor.

“All relevant factors to establish an employment relationship point to MBC, including the documents related to his employment, the context of Mr. Jacobs’ hiring, his subordination to other MBC employees and owners and the negotiation of his raise,” the ruling reads.

The ruling also says MBC failed to provide the agreement to workers and keep it posted in a conspicuous place.

Pearl argued in court that if the agreement applies to shop workers, it would gravely hurt Kahnawake’s contractors to compete on a profitable commercial basis.

Director of Justice Services for the MCK Kevin Fleischer testified that the wage difference was based on the fact that bridgework is more dangerous, but did not explain why council did not get involved to enforce the agreement.

Fleischer drafted a letter after consulting two chiefs in August 2011 informing Jacobs that “there was no obligation on MBC’s part to pay a shop fabricator the same wages, pension or vacation as is required for a labourer under the terms of the agreement,” according to the ruling.

Fleischer also testified that, to his knowledge, council did not ask if MBC was in compliance with the agreement, nor did it take any steps to ensure such compliance, according to Armstrong’s ruling.

The Eastern Door contacted the Mohawk Council for a response to the ruling.

“It’s too early to comment on the results of the lawsuit,” said council chief Carl Horn,” but the MCK’s position from day one was to always look after the workers’ best interest and make sure they get paid what they are entitled to.”

She added, “No distinction is made in the agreement: all native workers in the territory of Kahnawake performing work related to the Bridge structures, component and approachways are to benefit from the rates stipulated in the agreement. This is their entitlement, whether they physically work on the bridge or not. There is no ambiguity.”

Armstrong denied MBC’s argument that Jacobs’ job description as “shop fabricator” is not a trade listed in the FWA.

“This does not put him outside of these rates,” she wrote.

Jacobs withdrew his $15,000 claim for punitive damages based on an alleged unlawful and deliberate violation of his human rights under the Canadian Charter of Human Rights and Freedoms, according to the ruling.

Though the MBC partners declined comment, the consortium’s attorney gave a brief statement when contacted by The Eastern Door.

“I’d rather study the judgment a hell of a lot more closely,” said Pearl. “I consider this a very serious matter that has to be closely studied and dealt with by the clients. I’m recommending appeal.”