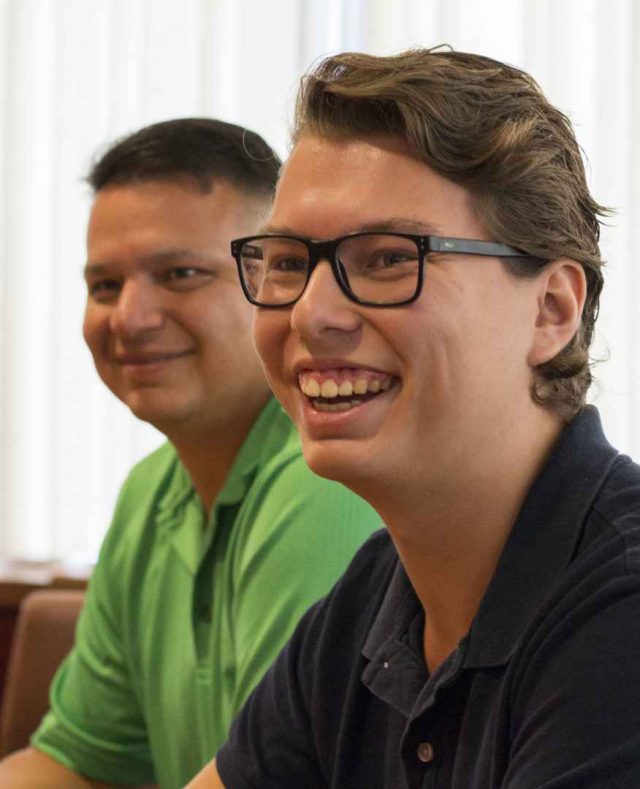 Tyler Diabo sits next to his son Josh Diabo, who accepted this year’s Jesse Deer Memorial Scholarship on Monday. Diabo plans to use the money to fund his school projects during his sophomore year in Fine Arts and Film Production at Syracuse University in New York. (Stéphane Lavoie, The Eastern Door)

By: Rachel Caron-Delas, The Eastern Door

Now in its seventh year, the Jesse Deer Memorial Media Scholarship was presented on Monday to Josh Diabo, a current Fine Arts and Film Production major at Syracuse University in New York.

“The goal is to get people involved and to have them inform the community,” said the award’s co-chair and Iorí:wase editor/publisher Greg Horn, during his introduction of the annual award at one of Tewatohnhi’saktha’s boardrooms.

The scholarship’s namesake, a perseverant go-getter with a magnetic, iron-willed personality, carved a niche for himself within the local media, despite not having formal training in the field.

His ambition led to opportunities at such outlets as K103 Radio, KTV, Mohawk TV and The Eastern Door, where he had his very own column to channel his outspoken personality. “Jesse was larger than life,” said editor/publisher Steve Bonspiel, who, along with Horn, co-facilitated the award ceremony and is co-chair.

Both families shared the importance of getting young people involved in the media and mentioned the pivotal role it plays in transmitting information to the community.

“When I hear about how he worked and touched people’s lives – that’s what I want to achieve in my work,” said Diabo, an aspiring filmmaker. “I always knew I wanted to create something – to be a storyteller.”

He plans to use the $1,000 bursary towards lighting equipment to enhance his projects.

Although Jesse Deer was initially refused a job at K103, “he did not wait for the job to get to him. He showed up at their door and asked them to teach him,” said his mother.

Diabo also hasn’t shied away from going the extra mile to offer his skills by helping out friends in the Syracuse community, and volunteering at the university television network.

“I think the most important thing is to get out there, get the skills, and bring it home. We need youth that have a voice and connections,” said Decaire.

Peter Deer also highlighted how, like his late brother, today’s storytellers must be fearless, perseverant, and dedicated.

“He was always at his job. He put his fears on hold for it. He worked tiring hours. So if you have ideas, don’t be afraid to get them out. You have to put out there what you feel needs to be said,” he said.

Though Deer’s career ended prematurely when he passed away on November 23, 2009 from H1N1, he managed to make his voice heard in numerous arenas.

His mom spoke proudly of his participation in the Vision Community project, where Jesse was invited to share his vision of Kahnawake over the next 10 years.

“The media opened up doors. Jesse used pen, computer, and microphone as tools to communicate,” she said.

Diabo hopes to achieve similar results with his video camera.