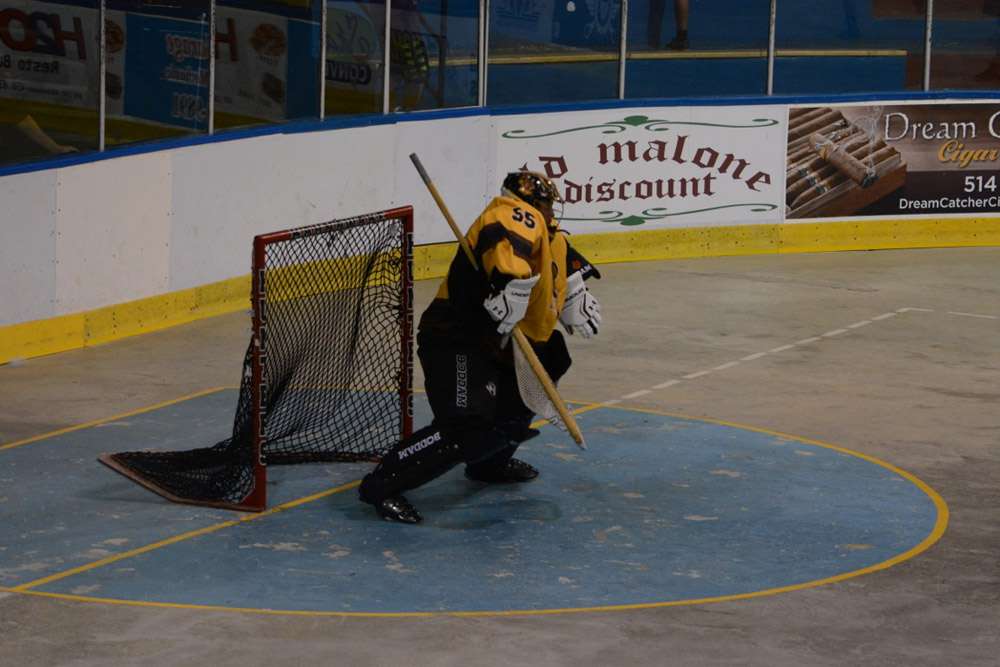 NLL championship √, Mann Cup √, President’s Cup √. Goalie Angus Goodleaf has won almost every trophy in the lax world, and he plans to be between the pipes when his hometown finally captures the ever-elusive trophy at the end of the month. (Daniel J. Rowe, The Eastern Door)

By: Brandon Bordeau, Special to The Eastern Door

The 2016 President’s Cup features eight teams and three medals, however, all 200 competitors are only interested in bringing home gold.

The festivities begin this Sunday (August 28) as eight of Canada’s best teams compete for Senior B supremacy in Leduc, Alberta.

The Kahnawake Mohawks enter the tournament having won their final 13 games. Pat Saunders led the playoffs in scoring (17 goals, 36 points) and Markie Kirby led the season in scoring (22 goals, 68 points).

Angus Goodleaf is in nets, and other veterans such as Louis Alfred, Al Jones, and Kaniat Deer have made the transition from offense to defense.

The Mohawks also have National Lacrosse League veterans Kasey Beirnes and Ryan Hotaling on their roster.

Coaches Jamie Batley (silver medalist with the Mohawks in 2000) and Jim Milligan have had the Mohawks playing their best lacrosse in two years as of late.

Kirby, a Mohawk since 2010, said “it was a relief when we swept the Axemen. They are a really good team and the prepared us greatly for the cup. We’re going to take it game by game.”

Their first game will take place on Monday afternoon (3:30 p.m. EST) as they will take on the West Coast Senior Lacrosse League champion Langley Warriors.

Bryan Poole had 80 points to lead Langley (11-2-1 in the WCSLA).The opening ceremonies precede the first game of the tournament (9:30 p.m. EST) as the host St. Albert Miners battle the Calgary Mountaineers in a rematch of the Rocky Mountain Lacrosse League (RMLL) final.

At 15-0-1, the Miners went undefeated and paced the league in points during the regular season. They defeated the Mountaineers in the RMLL Final, sweeping them 2-0 and outscoring them 28-12 during the series.

Keegan Bal paced the Miners with 70 regular season points, and Richard Lachlin scored 36 goals during the year. Jason Crook led the Mounties with 43 points, and former President’s Cup winners Matt Quinton and Tyler Melynk are other players to watch for.

Kahnawa’kehró:non Jamie McComber plays for the Can-Am reps, who defeated the Onondaga Redhawks in a four game sweep to get to Leduc.

“My expectations for my team this year couldn’t be any higher. We’re going for it,” McComber said.

As for beating the four-time defending Can-Am champion Redhawks, McComber added: “It was awesome. A 4-0 sweep over Onondaga, to me, was the only way to beat them. We owed them for last year.”

Tim Bergin finished as TNSLL scoring champion, and the Thunderbirds have veteran Ben Green and Alex Kedoh Hill of the NLL’s Buffalo Bandits.

The Merchants are led by Chris Attwood and went 14-2 during the regular season. Their first game is Monday evening against Calgary (6:30 p.m. EST).

The Saskatoon Brewers paced the Prairie Gold Lacrosse League by going 10-2 and have been that league’s best team for three years.

Kale Kane’s Chiefs move on to final round

Chokes, kicks and knees the tale at Fightquest