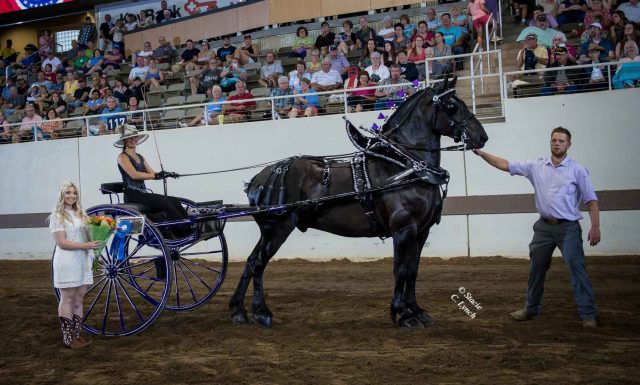 By: Safia Ahmad, The Eastern Door

Hannah Deer has been surrounded by horses her whole life. She continued to pursue that passion recently as she participated in the National Percheron Show in Indianapolis, Indiana.

The show, held on August 13 to 16, was part of the Percheron Horse Association of America at the Indiana State Fairgrounds and Event Center.

This non-profit organization was founded in 1934 with the goal of demonstrating the importance and value of percheron horses.

This was Deer’s second time at the event as part of the HD Rapids Percherons hitch. When she arrived on August 12, they took part in several hitch classes which involves the horse, the exhibitor and the wagon. The judges were paying attention to the horse’s headset, motion and uniformity.

“We’ve had two six-horse hitch classes,” explained Deer. “The first one was a combined six (Percherons and Clydesdales) which we were 10th out of 20 and we were fifth out of 11 percheron sixes.”

Deer had already established her presence at the tournament. She competed against 20 other women and came out victorious with the national champion ladies cart.

While the results were positive, Deer believed that changes were needed to be made going forward. On Tuesday, her lead horse cantered (mis-stepped) during a hitching competition and the judges were attentive to that mishap.

“We were put down a few placings due to that mistake, which we have to take as a lesson learned,” said Deer.

The improvements were made as she placed second out of 10 gelding teams. Her team also placed third in the gelding four horses hitch, which comprises of four horses divided into pairs where one group is placed in front of the other.

Her talent for showing horses was apparent at a young age. Deer started showing horses in jumping and western performance competitions 10 years ago, but has only been showing draft horses for four years.

She credited some of her success to Hille and Nancy Carr, who is her light horse trainer for jumping and has been there for Deer through the good and the bad times.

“I learned how to drive a team when I was four but not competitively,” she said. “I was very fortunate to have Justin and my good friend Nancy to always help and teach me so I became good, fast.”

Deer has competed in a number of competitions but they are all equally important to her because she simply loves horses. She studied in Equine Therapy School in Barriere, British Columbia this past spring to be able to treat her own horses.

“They (her horses) have never been happier,” she said.

While she has some time to enjoy her recent successes, Deer won’t have much time to rest. She will prepare for the Keystone International Livestock Exposition (Pennsylvania), the New York State Fair, and the Royal Agricultural Winter Fair (Toronto).