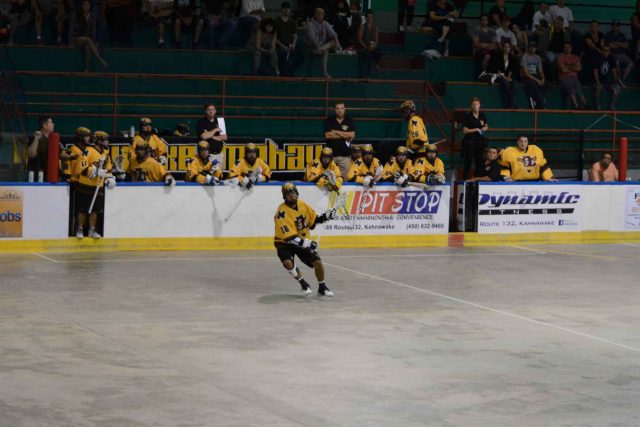 A knife’s edge was all that divided the two teams in the QSLL finals, but in the end it was the Mohawk side of the blade that found the mark, and booked Kahnawake into the President’s Cup in Alberta. (Daniel J. Rowe, The Eastern Door)

Crawford hit back, breaking his stick over Kirby’s head, the whistle blew and the National Lacrosse League star took the long walk to the sin bin to finish the game, with his team down a goal.

The Axemen, a team that cruised through most of the regular season, again found the Mohawks too much, as Kahnawake won to sweep the Axemen out of the QSLL finals to book a date at the President’s Cup Sr. B Box Lacrosse National Championship in Leduc, Alberta at the end of the month.

Crawford’s penalty came minutes after Mohawk Peter Jacobs put Kahnawake up 9-8 in overtime in a game the Axemen led the majority of.

Jacobs’ converted rebound goal capped of a stellar night for the Akwesasronon who scored the Mohawks’ opening three goals and was a menace all game in front of Brett Perras’ net.

“I was in the zone,” said Jacobs. “I didn’t want to lose tonight. I was determined to get this win.”

The Axemen got the jump Saturday with two quick goals in the first period before Jacobs tied it up. Crawford put Ottawa back on top with a blaster rocket underhand point shot on a delayed penalty to take the lead going into the first intermission.

Goals ping-ponged in the second with the Axemen holding the one-goal edge heading into the third, after some spirited conversation ended the testy period.

A slick behind-the-head goal courtesy of Kyle Alfred tied the game to start the third before big brother Ian Crawford put the Axemen back up by one.

With 45 seconds left, the Mohawks took a timeout and executed an offensive play straight out of the “how to tie a game with less than a minute left” textbook when Jacobs sniped an underhand gem from the top of the semi-circle.

After his game-winner in overtime, Markie Kirby, who had an unusually quiet game, put the dagger in the heart of Axemen fans and Kahnawake won 10-8.

The story would have been much different if not for the hard-working tireless Mohawks defence, led by Rochester Knighthawk goalie Angus Goodleaf, who made several key saves throughout the night.

“It was exhausting,” said Goodleaf. “It was hot, and two games in a row (ended) the same way. They battled hard, we battled hard. I’m really surprised that we swept them because every single game could have went either way.”

No player was more marked all night than Callum Crawford. Along with Kirby, Mohawk rookie of the year Ky Horn got the assignment to guard the Colorado Mammoth forward who scored just once, but added four assists.

“It’s a tough battle,” said the multi-sport talent Horn. “He’s probably the best player in the whole world. It’s hard to contain him because he’s so big and strong, but I thought I did a pretty good job for the most part.”

When the Mohawks finally took the lead, the pressure was all on the defence, which held form.

“You know you can’t make a mistake because it’s such a tight game,” said Horn. “You just have to play tight defence and communicate all the time. That’s the key to success.”

Saturday’s win came a day after the Mohawks stole game three in Ottawa with Kirby Joe Diabo scoring in the dying seconds to send the game to overtime.

“I had a lane down low, the goalie bit, and I F$%king buried it, that’s what happened,” said the Junior B Hunter and Peewee Mohawk coach, after showing the kids how to win a game.

Diabo was away for the Mohawks’ first pair of games, and returned with a bullet in game three that Kahnawake won 14-11.

“I came back and we played hard with character,” he said. “We dug ourselves out of a big hole, got to the top of that mountain and got two big wins.”

The Axemen were undefeated all season before the Mohawks beat last year’s champs July 23.

Since then, Ottawa could not beat Kahnawake.

Axemen captain Ian Crawford played for over a decade with the Mohawks, and spoke after the game about losing to his former team.

Callum Crawford’s late game penalty was one such moment.

“What do you imagine will happen when you break your stick over someone’s head?” said Ian. “You can’t really argue that call. It’s a frustration call. My brother plays with a lot of passion and a lot of heart, and he wears it on his sleeve. He knows it was wrong, but it’s in the past, and we move forward to next year.”

The Crawford brothers both played for the Mohawks before swapping sweaters to help grow the sport in Ottawa, where they both reside.

“We’re a very local team, and we’re all about community, and giving back to the minors to grow lacrosse in Ottawa, and that’s what was behind my decision to leave Kahnawake,” said Ian. “It was very, very heartbreaking for me, but I couldn’t be happier for them.”