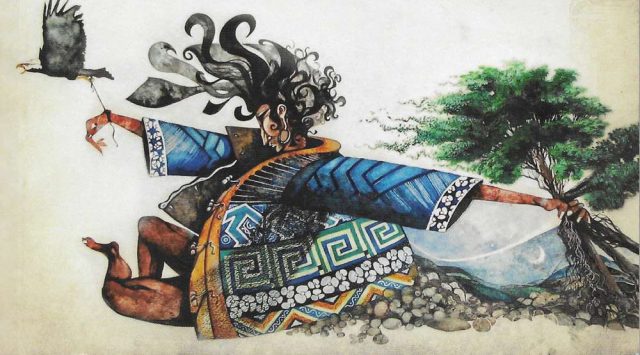 Use those two words, and a discussion will ensue involving history, theft, dishonesty, entitlement, disgrace and about 28 other issues.

It is not an easy or clear topic, and it is not one that can be summed up easily with a quick sentence or thought.

Cindy Amrhein, a historian from New York State, takes the subject on and uses her many talents in document analysis and breaking down property registers in the recently published book A History of Native American Land Rights in Upstate New York (The History Press, $21.99).

The result is an interesting and thorough detailing of treaties, deeds, land swaps (thefts) and everything related to property rights in upstate New York.

She is a historian’s historian and never sways far from the facts. The statements she makes, she backs up with facts, which is so refreshing particularly in the world of rabbit hole conspiracy theories, rumours and blatant untruths. You know, all that stuff you read on Facebook. “Under federal Indian law, there are special statues that apply just to the Indian nations of New York State. Why is that? It is because the nations of New York do not have their reservations held in trust by the government. This fact is very important and should not be forgotten. This is true sovereignty.”

That was the first sentence of the introduction!

If you’re not licking your chops like a dog looking at a steak that fell on the floor right now you’re either, (a) not a historian or (b) don’t care about Haudenosaunee claims of sovereignty.

Amrhein distinguishes the nations of New York from other nations of the east that were removed and set on reserves, and from this starting point breaks down each and every time an outside government failed to recognize this, or did recognize it, and took land that was unavailable due to treaties with the Six Nations.

She, like The Eastern Door’s Eric Pouliot in the Our History section, analyses each and every word of treaties, and looks at land deeds carefully, so, after reading, one can understand clearly why certain deals were circumspect (to put it lightly).

“Despite the fact that treaties, by law, are to be interpreted liberally in favor of the Indians and the way they would have understood them, this is not always the case when a land claim goes to court,” Amrhein writes.

“It is often implied that treaties were only created to pacify the tribes to keep the peace. This attitude, in my opinion, is historically inaccurate.”

She also calls out changes in language, which made this cynical proofreader very happy. You know when they start saying “harvesting trees” instead of “clear-cutting” to use an example from my youth in BC.

“They used to be called treaties,” Amrhein writes. “Now they are called “compacts or “memorandums of understanding.” Call them whatever you like, a treaty by any other name is still a treaty. Despite the passage of time, nothing about how treaties are done has changed, and nothing in all that time has been learned.”

The book may not be to every reader’s taste, as it requires working through some antiquated language and wording commonly found on a land lease.

That said, it’s worth the effort to look at the Macomb Purchase, Treaty at Big Tree, the 1838 Treaty and every other document related to Haudenosaunee land rights in New York.

Every elected official in the region should read this book, as should every student in the state, as it is important for the greater public to realize why there is so much frustration with those trying to claim land that was unlawfully removed.

This may seem like the biggest ‘well duh!’ statement of the week, but many simply don’t understand the history of the regions they live in.

Take the Democratic or Republican candidates for the president of the United States. One lives in New York and was a senator there and the other is from the state, but neither has said one word about the original inhabitants of the area that have never left, and can trace their place in the state back hundreds of years before Drumpf became Trump.

Here’s a slogan I’m giving to be used with permission by American candidates for office this year: Make America Smart Again.