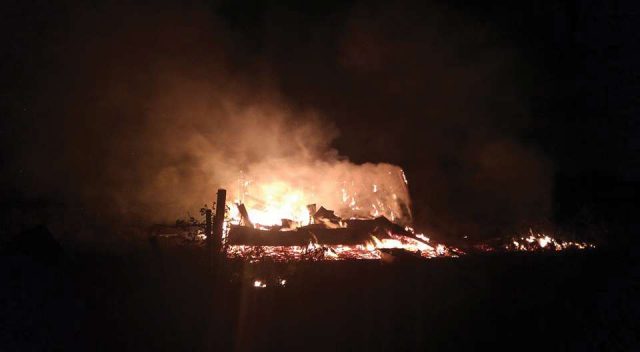 The third fire on land leased by Bryan Deer completely consumed a barn last weekend, as the property’s leaser remains frustrated at what is suspected to be arson. (Courtesy Bryan Deer)

Friday night, a fire broke out in a barn on the property leased by Bryan Deer near McGregor’s Farm, known as Bar S Ranch.

“It was burning for quite some time before someone called,” said Deer.

The Kahnawake Fire Brigade went to the area between 8 and 9 p.m. to investigate the barn that was beyond saving by the time crews arrived.

“What I’m guessing is that it started when it was light, and when it got dark people saw the glow and called it in,” said firefighter Karonhiio Curotte.

The barn is used for cattle in the winter, none of which were harmed in the blaze. Deer said the buildings are not insured as it’s a farm in Kahnawake, and not eligible.

“It’s at the end of a road that is not used that much unless you have a four-wheel-drive vehicle,” said Curotte.

It is the third fire started in the area, and is suspected to be arson.

“There was a house that burned a few months back, and then a trailer container that was loaded with usable material,” said Curotte.

On April 22, a fire consumed a 48-foot container trailer with cedar and spruce beams on the same property, completely engulfing the structure.

When the KFB arrived Friday, crews noticed there were no embers and the fire was not travelling, so they let it burn to nothing over around 12 hours.

“There was electricity in the barn that we know of,” said Curotte. “There are no other obvious signs.”