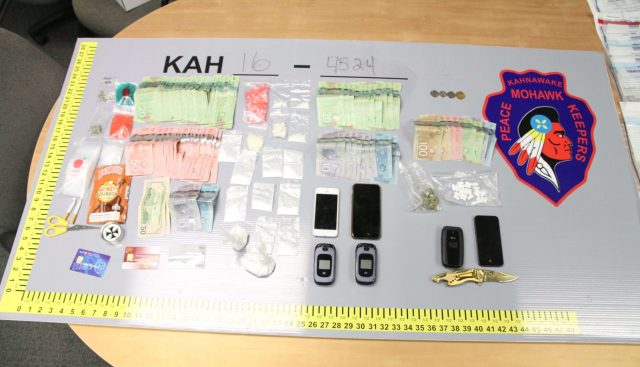 Peacekeepers made a drug bust last week that included suspected crack cocaine, continuing the troubling trend of drugs in Kahnawake.

According to a Peacekeeper report, PK Nikki Lahache was on patrol near Rice Road when she noticed a white Chevy Malibu hastily depart the MCK apartments area, after appearing to notice the squad car.

The vehicle proceeded past Wheel’s Convenience and Lahache pursued it, as it turned at Old Malone Highway heading west then south on Route 207, eventually circling back to Rice Road.

Lahache intercepted the vehicle in front of Wild Bill’s restaurant, and saw the person in the back seat moving around and eventually ducking out of view. Lahache spoke to the non-local male driver and asked for ID, which the driver said he did not have. The non-local male passenger said he had a license and that the vehicle was a rental.

Lahache smelled the odor of fresh marijuana and asked the driver if he had any, which he said no.

Lahache’s fellow officers arrived on the scene and corporal Watio Diabo, who caught the scent of marijuana, again asked if he had any, which the driver again refused. The individual was then asked to step out of the vehicle after which Diabo found a small 2.4 gram bag of suspected marijuana.

The non-local male in the passenger seat was searched as well and found to have $350 cash and a large Ziploc bag with suspected cocaine under his shirt. When asked if he had more drugs, he said he had some in his boxers and produced another bag of suspected crack cocaine.

In total 74.7 grams of suspected crack cocaine was found.

The third non-local male had $356 cash but no drugs on him.

After a CRPQ check, the driver was found to have an SQ warrant, was on a recognizance and probation.

All three have charges pending for possession with intent to sell controlled substances, and charges are pending on the driver for breach of probation.