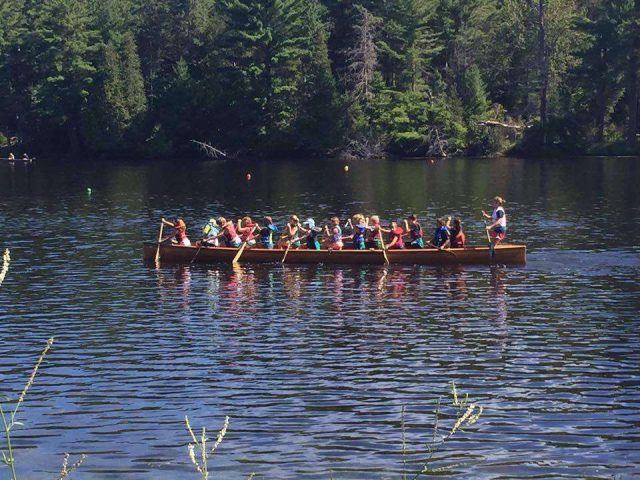 Jayla White hopped in a war canoe as one of several races the Atom up-and-comer competed in, in her first-ever regatta. (Courtesy Teka Marquis)

The Onake Paddling Club racers at long last got a taste of competition at the Cascades Regional Regatta Saturday in Chelsea, Quebec just outside of Ottawa.

The paddlers had been set to race in two previous regattas this season, but were thwarted by drastic weather conditions and water issues.

“We look forward to regattas because that’s where you see results from all the work they’ve been doing on the water and where they stand with the rest of the group,” said paddling coach Maris Jacobs. “It was kind of disappointing because halfway through our first regatta in Otterburn we got rained out, so we didn’t get to see a lot of results.”

Lachine’s regatta was cancelled due to low water levels.

The nine girls and two boys at long last got to show their stuff for Onake Saturday, and they did not miss the opportunity to impress.

Onake welcomed three rookie Atom racers this year in Jayla White, Stone McGregor and Iakonerahtakatste Goodleaf, who all performed well on the weekend.

“I wasn’t nervous except for the K1,” said White, who raced in a half-dozen races including in the war canoe with Pointe Claire.

Coach Jacobs was impressed by how well the young racers did, and how quickly they took to racing, having been introduced to the sport at the canoe camp at Onake.

“They were doing really well, and wanted to try racing boats, so I invited them to regattas to see if they would want to do it for next year,” said Jacobs. “They did really well.”

White spoke about why she has taken to the new sport.

“It’s a workout, and I love staying with my mom and she always brings me paddling,” she said.