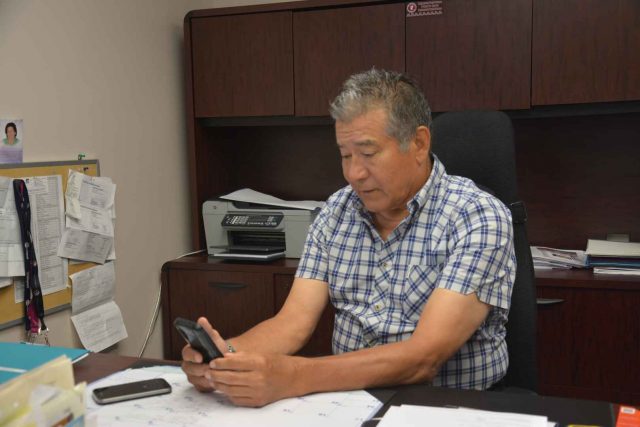 “The basis of our existence is one of the main issues, and that’s ‘who’s who?’” said Norton, on the key issue facing Kahnawake at present. (Daniel J. Rowe, The Eastern D00r)

Last April, the man who sat at the head of the Mohawk Council of Kahnawake for over two decades announced he would be seeking his old job as council grand chief.

Two months later and Joe Norton went from being “former” to “current” council grand chief after defeating his successor and predecessor Mike Delisle by a narrow margin. He inherited a position full of new challenges and opportunities.

A year in, The Eastern Door asked Norton what the number one challenge is for Kahnawake’s leadership.

“The basis of our existence is one of the main issues, and that’s ‘who’s who?’ Who can live here? If you don’t get past that, you’re going to get bogged down in all kinds of areas,” he said.

Economic development and membership remained hot topics throughout Norton’s first year in office, as they were before he took office after an 11-year absence.

“I’m not satisfied with either one of them, not happy at all,” he said. “We really have to step up the campaign internally over here. On membership, what are we waiting for? The courts? For me, that’s BS. That’s got to be settled here.”

Norton is annoyed by fears of outside courts or lawsuits, and doesn’t feel they should be considered while Kahnawake decides its membership and residency criteria.

“So what? We’ve been there before. We’ve come out of it, and this is going to be the same thing,” said Norton.

“I don’t take it lightly because there might be some bucks involved with that in terms of getting sued and somebody winning some money. We lost money before, but we’ve moved on and said we have to do what we have to do.

“If I have to go to court, I’m going to tell the truth. This is the way it is, and it ain’t going to change, so throw my ass in jail or fine us, whatever you want, but this is going to be the way it stays. No court of law is going to order that we change our law.”

Norton responded to those that are opposed to the membership law and residency rules.

“The point that needs to be clarified and solidified is whatever it is that we’re putting in place in this community,” he said. “We need to get to that point that that is going to happen, and people know the benchmark.

“Once that’s done, if there’s an opportunity, for anybody else that feel they have a right to be here for them to apply to the process and have the application done, the processing done, or whatever mechanism, to do the process. What’s happening now is everybody’s just coming in saying, ‘damn. We don’t have to ask,’ and then you get a push back from the majority of the community.”

Norton remains unhappy and unsatisfied about the vagaries of who can own land and live in Kahnawake. Education about what is private property and what is communal land is needed, according to the council grand chief.

“Yes, you have a certificate of possession, which is different from a fee simple document that you get if you buy a home in the city of Montreal,” said Norton.

“Our land regime is in a different context. Pre-Indian Act, there was another land regime in place here and it was a traditional one. A major part of that has carried over to this day because it’s communal land, really, and there’s protection in having that.

“Yes, as an individual there’s private property and you can sell it, trade it, give it as an inheritance and all those types of things, but who you are is the issue that makes you eligible or ineligible. That’s what it’s about for me.”

Norton added that when crafting laws and legislation, it’s important to consider who will inherit the world in years to come.

“We have a tendency to come back too strong, to hammer. It’s almost like you’re punishing the future and you can’t be doing that,” said Norton. “You have to be flexible in what the future wants because we’re not always going to be sitting here.”

Economic development has likewise been a struggle to get off the ground, as quickly as Norton would have liked. He ran on a platform of major economic development, privately and publicly, and has had to fight a variety of political battles that have halted development.

“It’s been frustrating,” he said.

The lawsuit surrounding the returned land along Highway 30 is a particular annoyance for Norton, and one he has been vocal about throughout his first year, and he remains unsettled about the agreement that saw the land returned in the first place.

He also feels opportunities in online gaming. Medical marijuana and other industries are ones the community needs to jump on early to take advantage, he said.

He wants cooperation between the private and public sectors more developed, but wants to hear about plans with a potential for growth, and ones the community supports.

Norton could not avoid bringing up a specific example of something that council is not interested in pursuing.

“If the community says, ‘we don’t want a casino.’ Go find something else,” said Norton.

Norton was on council when the first tobacco producers came to the table interested in partnering, and saw the result of not taking advantage at the time.

“You have to take measures now, so that there’s not a chaotic situation that you can’t control,” said Norton. “I remember when it (tobacco) first began in Kahnawake. I was in this position when we were approached by the first people who started selling tobacco in Kahnawake. They came to the MCK and said, ‘let’s go into a partnership and let’s do this,’ and we said, ‘no.’ What happened after that? It just went haywire.

“I think if at that time, we would have said, ‘yes’ we could have sat down and made regulations and did whatever we needed to do, so the community didn’t lose its rights and made some very significant financial gains… You have to learn by example, and if you don’t you’re going to make the same mistakes all over again.”

The Eastern Door asked Norton how the job feels at 67 years of age in comparison to when he was first elected council chief in 1978.

“When I was younger there was a lot of, excuse the expression, piss and vinegar, there was all kinds of energy. Today, it’s a different situation. It’s utilizing your knowledge and experience for it not to be all piss and vinegar (although) it’s there when required,” Norton said with a laugh.

There was no shortage of action over his first year back in office, and it has flown by, according to Norton.

“It went by very quickly,” he said. “A lot has happened even in a very short time period. One year may seem a very long period for some people, but in this type of business it can move very quickly and so many things can happen.”

Once the votes were counted, Norton did not sail into office with ease. Personal trauma and political realities became very real in the first few months in office.

“It was also a sad time because my sister (Selma Delisle) passed away just before the election, and shortly there after I lost a grand nephew (Eli Hemlock), so it was all in a very short time period that all this stuff happened,” said Norton.

Council chiefs Martin Leborgne and Arlene Jacobs were the only other people at the table who had worked with Norton before, and The Eastern Door asked whether it was tricky to work with the mix of personalities around the table with different backgrounds, personalities, and politics.

“It was and it still is,” said Norton. “I don’t think that will ever go away. That’ll be there all the time. I don’t want to speak badly of any of my colleagues because I didn’t elect them. They were put there, so I have to work with what the community has decided to put in place.

“I do accept that, and have to realize that there has to be some kind of working relationship that has to evolve.”

Norton admitted there were and are disputes with other council chiefs that he would like worked through, so the community can remain the focus at the table.

“I’ve learned a long time ago that you can’t do business that way,” said Norton. “You have to have your confrontation, if you want to call it that, but then say, ‘alright. I know what you want. You know what I like, so let’s move on.’”

When asked if he will run again for council grand chief in two years, Norton’s answer was direct.

“I have to,” he said. “There’s going to be unfinished business. There will be directions and things that will be created, and you have to see them through.”