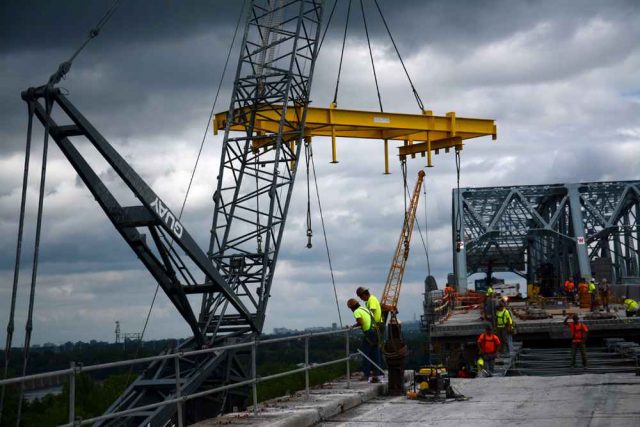 With less weeks ahead than behind, the MBC bridge crews power through the humid summer sun looking to finish the second phase of deck replacement by the end of August. (Daniel J. Rowe, The Eastern Door)

Phase two of the Mercier Bridge deck replacement project is underway, and the Jacques Cartier Champlain Bridge Incorporated (JCCBI) team took Montreal, Chateauguay and local media for a visit of the site Tuesday morning to see the construction crews from the Mohawk Bridge Consortium (MBC) in action.

The first phase finished ahead of schedule, and MBC partner Sterling Deer spoke about watching the final prefabricated concrete slab fit right where it was supposed to go.

“When we finished that side, we put the last piece in and it came flush with the other one,” Deer told The Eastern Door. “I said, ‘you know what? That’s a marvel in engineering and our teamwork here that when we get to the last piece, it fits.’ Everybody should be proud of that.”

The first phase of the blitz period finished early due to a number of positive factors, according to MBC’s field engineer Chad Rice.

“Many things worked for us,” said Rice. “The weather is one, our previous experience, and a lot of work. Everything is just in time on this project, so it isn’t as easy. To the casual observer, it looks easy, but a lot of work went into the preparation.”

Rice detailed some of the aspects to this year’s blitz that were different and more complex than previous years.

“In the ramps that we’ve done in years’ past, it’s two lanes, but here, depending on which way you go, it diverges or it converges into as much as four lanes for each ramp,” said Rice.

“So the panels are much wider, they’re designed differently. There’s also not only straight sections like here, but it’s curved and it’s inclined and it’s sloped, so all of these things add to the complexity.”

Regardless of the complexities inherent in the play, Deer expects the same efficiency for the second phase of the blitz.

“It’s pretty much the same,” he said. “It’s become routine now for MBC. We did ramp two, three and four, and we did the island section, both sides, we had two blitzes there. So it’s become pretty routine for the workers, the staff and everybody involved in this project with the sequence of events that happen during blitz period.”

The whole project is a collaborative effort with all sides needing to work together to ensure maximum efficiency. Rice said his view is very similar to the crews on the ground installing the various pieces of the puzzle.

“I look at it almost as much the same way the ironworker does because it’s not only the theoretical positions of all the components, but how to install it as well,” said Rice. “You can design anything, but how you can put it together and assemble it, it all comes into one at that point.”

This year, as in years’ past, MBC crews have new and old faces. This year, however, there was one particular face missing that has been noticeable from the start of the work.

“Over the years people come and go, and we lost our project manager Wayne Rice last year due to cancer,” said Deer.

“We had to keep moving, that’s what he would want, and here we are again doing it all over again, and it looks like a success up to know. He had the right attitude when it came to stuff like this, and he’s going to be missed.”