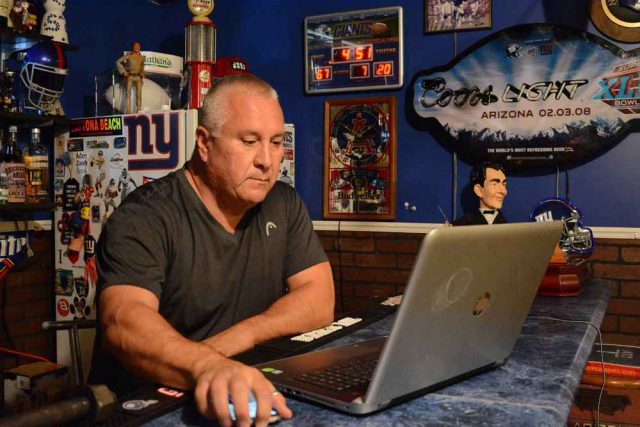 Former council grand chief Mike Delisle admits politics remains “in his blood” though he won’t say whether he’ll seek a seat at the head of the table again. (Daniel J. Rowe, The Eastern Door)

One day, he was fielding calls from throughout the community, sitting in multiple meetings daily, answering questions from journalists and plugged into the heart of Kahnawake’s public body, the next, he was on a golf course trying to shave a stroke off his handicap.

It is the reality for all politicians who seek re-election and are defeated in a vote, and for former Mohawk Council of Kahnawake grand chief Mike Delisle, it was his June of last year.

After losing in a hotly contentious bid for re-election by 91 votes to current council grand chief Joe Norton, Delisle found himself for the first time in over a decade and a half not at the council table.

Delisle pulled up to the 99 Restaurant on a sports motorbike Friday for lunch, and sat down with The Eastern Door to speak about his year and change out of office.

“Last summer was relaxing,” he said. “(It was) the first time since 1998-99 when I first got elected. I took some time to decompress and shave a few strokes off my golf game, which I think I did, but not consistently still.”

Throughout the summer, Delisle said he did some consulting, shopping around for employment before landing with the Usand Group, a firm that works to find financial solutions for Onkwehón:we communities across the country.

Delisle spends the majority of his time in his home office as the lead sales representative for the Douglas Cardinal Housing Corporation, a company that works with First Nations, Inuit and Metis populations to provide sustainable housing.

He met the Door Friday after a week at the Assembly of First Nations Annual General Assembly, after manning a booth and introducing the company to Onkwehón:we and Canadian leaders across the country.

“I believe in the project I’m working with in Douglas Cardinal Housing,” said Delisle. “He (Cardinal) believes this housing project will be his legacy. I believe his legacy is already set.”

Cardinal is an Anishinaabe architect dedicated to developing sustainable housing in Indigenous communities. He partnered with the Usand Group to assist with funding, and seeks to assist in helping those without adequate living conditions.

“Housing seems to be the number-one need,” said Delisle. “If you can’t sleep at night, if you’re cold in the winter, hot in the summer, if your house is dilapidated, if you’re breathing in mold, how can you be a successful part of society?”

He called the project rewarding, and hopes to develop stable partnerships with the federal government to secure funding.

The first 30 of 50 Douglas Cardinal homes will go up next month.

The lingering question for any former politician is naturally: do you miss it?

“Yes,” he said. “I don’t miss some of it depending on the day, but yeah, I miss the politics of it. I miss the challenges externally. I miss seigneury.”

Delisle was lead negotiator since the Seigneury of Sault St. Louis grievance was opened with the federal government, and said before the election that he would like to see it through to a settlement. The file has been less active in the past year than Delisle would have hoped.

“I’ll have to be honest,” he said. “I’m disappointed in the lack of development in the past year, it’s been over a year now… It was 10 years of my life. I was the only negotiator on it ever… To see it kind of languish right now is not only disappointing and discouraging, but I hate to see 10 years of work be stagnant.”

Delisle sees the situation as ripe now with the election of Justin Trudeau’s Liberal government, and wishes more were done to secure a settlement package.

The second question lingering many have asked: does he want back at the table?

“I’m asked probably once a week if not probably once a month,” he said. “I don’t know. It’s two years away. Who knows what will happen. I won’t say yes or no at this point. I think it’s still in my blood, to a degree.”

Delisle remains attuned to issues in Kahnawake. He attends community meetings, but does not speak at them.

“If I needed to, I would,” he said. “The three that I’ve been to didn’t need something to be brought out. I could have. It’s not about sour grapes or trying to embarrass anyone or bring up issues of the past.”

He said he does not read the newspaper locally or outside, but remains plugged in to what’s going on. He remains friends with “half a dozen” of those at the council table, and speaks with them on the golf course, at restaurants, or wherever he may bump into them.

Going from inside the system to outside gives Delisle a perspective few get. Ironically, it was the perspective of his predecessor Norton, who became his successor.

“It’s very different being in the private sector,” said Delisle. “I haven’t been there for 17 years until last year. I won’t say it was difficult to deal with. Honestly, I’d say it’s more relief than anything else.”

The relief comes from not being responsible for the day-to-day demands of the job.

“It’s still my community. I still want to see it see it be successful and prosper, but I’m not the driving factor anymore,” said Delisle. “I’m one of 6,000… As chief you’re the focal point. It’s up to you to deliver and that pressure’s been gone for a year now.”

Last year’s election was more contentious than past ones for Delisle. Running against his predecessor, fellow council chief Lloyd Phillips, and former MCK chief Keith Myiow, brought up a few jabs from all sides.

For Delisle, the past is the past, and he doesn’t believe in holding any grudges.

“I don’t have any ill feelings for the three who ran and/or the people who helped campaign for others,” he said. “That’s politics. Kahnawake used to be a lot nastier than it is today, and I’m not talking about Facebook or social media because that’s where most people get nasty today and the muscles come out.

“It is what it is. I think we dealt with it, all of us, pretty fairly. I took my shots at the end, when I thought I needed to, and this is how it turned out.”