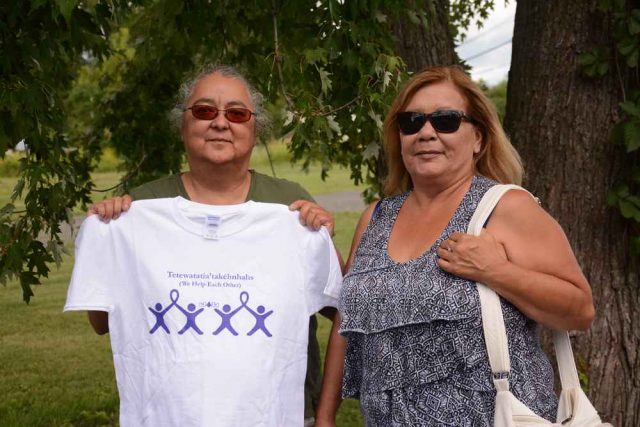 Helen Jarvis Montour and Gale Laborgne are two of the women behind Tetewatatia’takéhnhahs, a new fundraising group aimed at helping cancer patients and their families. (Jessica Deer, The Eastern Door)

A new non-profit organization in town is gearing up for its first big fundraising event next month.

Tetewatatia’takéhnhahs, which means, “we help each other,” was launched earlier this year by a small group of motivated Onkwehón:we women, with the hopes of helping raise funds for Kanien’kehá:ka cancer patients and their families.

On August 13, they’ll be hosting the Purple Ribbon Walk at the Karonhianónhnha Tsi Ionteriwaienstáhkhwa grounds in lieu of the Canadian Cancer Society’s annual Relay for Life.

“Some people were commenting how they wished the money stayed in town because the community needs help too. There’s a lot of cancer in our town,” said Helen Jarvis Montour, one of the event organizers.

Montour said the concept of the Purple Ribbon Walk is similar to the Relay for Life, but 100 percent of the money raised from the event will go toward offsetting expenses for those in town that are currently undergoing cancer treatment.

“Cancer research is important, obviously, it’s not to take that away,” said committee member Gale Laborgne, commenting on fundraisers like the Relay for Life that mostly benefit further research.

The group of women, which all have experienced the impact of cancer on their loved ones, began meeting weekly in April after they heard a local woman battling the disease was in need of financial assistance and took her concern to Facebook.

“Next thing you know we were all sitting at my kitchen table,” said Laborgne.

For Montour, being a driver for the medical mobile transport pushed her into becoming involved with the cause.

“I think a lot comes from my job and my passengers,” said Montour, who sometimes transports cancer patients to appointments.

“How I can help them? How can I help people with cancer? I’m not a doctor. If there’s any kind of fundraising that has to do with cancer, well, I’m there. Whatever I can do.”

In the past four months, the group has raised money through multiple raffles and mini lottos, and a booth at the Echoes of a Proud Nation Pow Wow.

“We already helped someone with an air conditioner because I think that was the priority we were feeling she needs right now with this heat,” said Laborgne.

The Purple Ribbon Walk is seeking teams to register for the six-hour relay walk, as well as to purchase memory cards and $5 luminaries to commemorate someone who is currently battling cancer or who has passed away because of the disease.

Those interested in volunteering are asked to contact Montour, Laborgne or any one of the other committee members: Lisa Skye, Kathy Skye, Tricia Laborgne, Trudy Thomas or Anna Mae Rice.

A number of donation boxes are also located at Dustin’s, McComber’s, and Creekside convenience stores.

“No amount is too small,” said Laborgne.