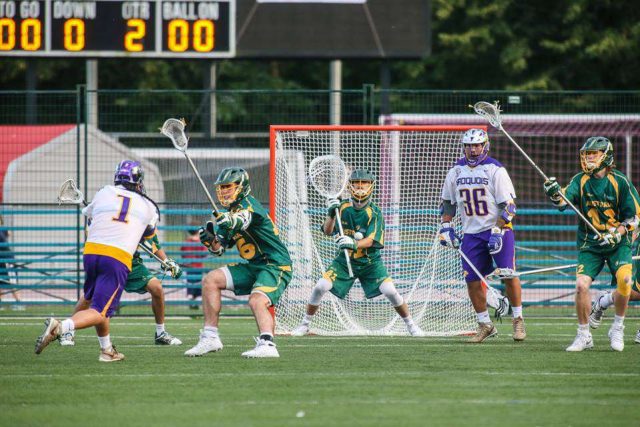 The Iroquois Nationals U19 squad battled the Canadians to the end, coming up just short. The Nationals regrouped and dominated Australia for bronze. It’s the third straight third place finish for the silver and purple. (Courtesy Paul Yates, Vancouver Sports Pictures)

Four years, one ocean and a continent later, and the song at the FIL U-19 Men’s Lacrosse World Championship remained the same in Coquitlam, BC.

As in Turku, Finland, the USA took gold, Canada silver and the Iroquois Nationals bronze, as the up-and-coming field lacrosse stars from the three nations battled it out at the Coquitlam Town Centre Park, along with 11 other teams from across the globe.

The US overcame a six-goal deficit against Canada in the gold medal game to remain the only nation to have won the tournament in eight editions of the event.

The Iroquois Nationals made easy work of the up-and-coming Australians, winning 20-8 to retain the team’s bronze medal status. The Iroquois now have three consecutive bronze-place finishes at the tournament.

“Bronze wasn’t what we wanted, but we played hard and brought back a medal for our nations,” said Seneca defender Chaunce Hill of the Nationals.

After ping-ponging a goal apiece in the first quarter, the Nationals bounced back from three unanswered Canadian goals with five straight, including back-to-back tallies from Tehoka Nanticoke.

Leading 6-4 to start the second half, Canadian Trenton Leclaire potted one before Doug Jamieson and Nanticoke scored to push the lead to three. The teams exchanged goals again, and then, unfortunately for the Nationals, things went from purple to red.

Canadian Ethan Walker scored at the 13:23 mark that sparked a seven-goal run, and by midway through the final quarter it was Canada leading 13-9. The Iroquois runners were not done, however, as Devon Buckshot scored on the power play with just over six minutes left to close the gap to three.

Canada held to its lead, however, and wound up in the gold-medal match, while the Iroquois played for bronze.

Losing the heartbreaker to Canada did not throw the Nationals off their game Saturday when facing the Australians for bronze.

Nationals Sekawnee Baker and Mitch Laffin opened the scoring within two minutes, and the Iroquois dominated the final three quarters by a margin.

“The Canada game was a tough one, but the team didn’t lose focus and we were able to win a bronze medal,” said Laffin, from Onondaga, who ended the game with six goals and three assists.

Top points man for the Nationals after seven games was Austin Staats with 22 goals and 14 assists, and Nanticoke had 22 goals and nine helpers.

Defender Trevor Stacey was the lone representative from Kahnawake on the field for the Nationals.

The team never looked as though it would lose to any team other than Canada and the US. It is beating the top two teams that remains the elusive goal for the silver and purple.

“The Nationals just need to get organized a bit better,” said Laffin. “Get the teams picked early so players can play together and get some type of chemistry on the field.”

There is no questioning that the Iroquois have talent, but more practice before the tournament, and a better understanding of each other’s playing styles would have helped the team take out one of the two heavyweights, according to the University of Albany attackman.

“That would have given us a much better chance of taking down one of the top dogs,” said Laffin, who will join fellow National Colyn Lyons and Kahnawa’kehró:non Cougar Kirby with the Great Danes. “We had the talent on that team to do it. We just didn’t have the on-field chemistry.”