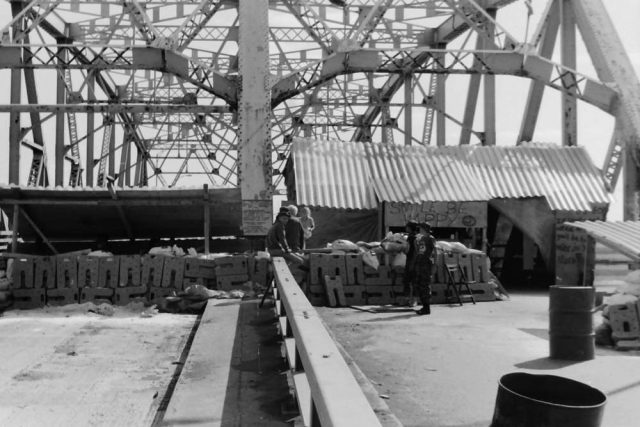 Military veterans were essential throughout both Kahnawake and Kanesatake in 1990 as tensions rose and the potential for disaster loomed. (Courtesy Martin Loft)

Three days after the barricades went up in Kahnawake in the summer of 1990, another centre of activity was founded in the heart of the village: the Legion.

“The Legion at the time became the headquarters for Kahnawake,” said navy veteran Louis Stacey, who was active during the summer. “The late Ronald Paul at the time was the president of the Legion, and he was actually working in Detroit and couldn’t get back here because of the barricades. He gave his approval over the telephone that we use the Legion as sector one.”

In the third part of The Eastern Door trilogy of stories featuring the military during the summer of crisis in the Kanesatake and Kahnawake, the Door spoke to two veterans, who were active in the community throughout.

The Legion became as important a location in Kahnawake as any during the summer.

“Each day the situation changed, and each day, we had to adapt to the situation,” said veteran Kenneth McComber, who was heavily involved with the operation and negotiation in 1990.

“Our job was to keep control of the situation. There are people who are suited and not suited to be in it, so you have to make sure they’re placed in different locations.”

Veterans’ presence at the checkpoints throughout the community meant that the rules of engagement were obeyed, and that all checkpoints were on the same page when it came to what action to take or not to take.

“Every checkpoint in this community had an experienced veteran at it or more,” said Stacey.

“You have the expertise on how to mobilize quickly,” said McComber. “There’s a lot to watch for what takes place.”

Stacey said veterans, warriors and civilians met at the Legion regularly to exchange ideas and information.

“The people who did not have any military experience at all, they were taken aside and given more detailed information on how to go about certain things that those of us who went through boot camp knew already,” he said.

McComber said a similar procedure extended to Kanesatake’s barricades, and the two communities’ warriors were in constant contact.

“We were in control of it at all times,” he said.

The Whiskey Trench incident was an example of when things did not go as planned.

“That should have never happened,” said McComber. “They (the Canadian military) gave us an ultimatum. Evacuate the hospital, or the army was going to come in. I went to all the points and we made a decision and said, ‘we’re not moving.’”

Community members, however, got wind that the military was coming, and vehicles began heading for the bridge.

“In a war, it’s fog; nothing’s clear,” said McComber. “They were held there for a couple of hours at least, in that heat. When they let them go through, the mob was already on top waiting for them with rocks.”

McComber added, however, that if sick patients instead of women and children had been forced to wait in the summer heat for hours, then stoned going through the trench, McComber fears the situation would have been even worse.

“You would have stoned people that would have died,” he said. “We had over 45 people all with different levels of illness, but mostly elderly. How could they have waited with all the windows up and no air conditioning for over two hours? And then be stoned.”

Leaving the patients in the hospital was a “military move” according to McComber. The veterans did not want to be forced into action, and called the army’s bluff.

Considering the possibilities, McComber remains proud that there was not major bloodshed throughout the summer.

“I’m just glad that we got out with a minimal amount of damage,” he said. “I’m not saying anybody won. It was like going through a war. We kept it as tight as we could do.”

The cooperation between civilians without experience, and those with a military background was overwhelmingly positive, according to Stacey.

“The people in the community, and especially the people who were on the front lines at the barricades who did not have any military experience, looked forward to, and asked a lot of questions to the veterans,” he said.

Each checkpoint sent representatives to the legion to get updates or information as it came. Stacey said Vietnam veterans were particularly useful throughout the summer.

“People were looking for your advice and respecting your experience and what you learned while you were in the service to benefit the people here in the community,” said Stacey.

The military presence in Kahnawake and Kanesatake also affected how the outside forces dealt with the two communities, according to Stacey.

“Our military experience here in Kahnawake did play a big role in how Canada and Quebec approached Kahnawake,” he said. “In all areas, actually. In how they approached in negotiations and in how the approached us physically.

“I don’t think they were as aggressive as they could have been mainly because I believe they knew that we had more wartime experience and personnel than the entire Canadian army at the time. Now that number has obviously changed.”

Once the barricades came down, the trouble by no means stopped.

“When it was over, it was just as bad,” said McComber. “We were pulled over all the time at random and who are you going to report it to? The police? They’re the ones who are pulling you over, and they would make up any story to go in your truck. Really, we were at a disadvantage and it was very stressful. It took a while for things to calm down. It didn’t happen in one day.”