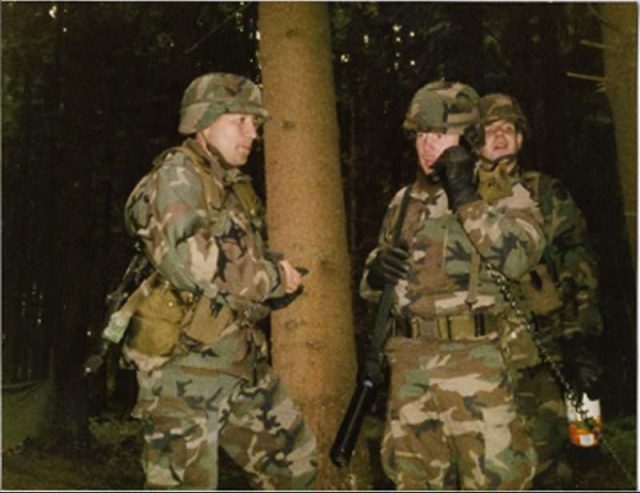 Soldiers from Kahnawake in 1990 were pulled in two directions between duty and home. (Courtesy Ray Deer)

During the summer of 1990 military personnel and veterans played a central role in Kahnawake and Kanesatake.

Some were veterans of past wars, who aided those without experience understand the rules of engagement in the communities, as the Surete du Quebec and the Canadian Army stood opposed the communities’ barricades.

Others were far from home forced to watch and hear events from miles away.

For the second part of a three-part series highlighting stories from Kahnawa’kehró:non with military experience, The Eastern Door traveled beyond the boundary and across the ocean and spoke with sergeant Ray Deer, who was stationed in Germany at the time, and ultimately pulled to focus on a very different conflict in a region that would take the international attention away from his home and hold it for years.

Deer was stationed in Heidelberg, Germany at the 130th station hospital, and had been overseas since 1985. He was never shy to share his culture with fellow servicemen as well as people in Germany, who, he said, were very supportive of Kanienkehá:ka culture and resistance.

“Being in that community that long, people started to know me because I was doing Native American presentations and talking to people about being Mohawk,” said Deer.

On his way to work in July of 1990, Deer’s attention was pulled across the Atlantic.

“Some of the black basketball players that I knew very well pulled me aside and said, ‘hey. Sergeant Deer. I think there’s something going on on your rez,’” said Deer. “They said, ‘you were on the news and something about Mohawks and the police.’ I was like, ‘are you serious?’”

What became known as the Oka Crisis had become international news, and Deer remained glued to CNN and later BBC for updates on what was transpiring in Kahnawake and Kanesatake.

He also had an urge to go and help those in his community.

“When that happened, I requested to go on leave,” said Deer. “I figured I could go on emergency leave especially when I heard that they were intending to have the Canadian army go in.”

Deer served in the Canadian army after high school, and thought his experience could be of use to the warriors. However, as he was serving in the U.S. Army, the decision of where and how he would be spending his time was not his to make.

“I said maybe I could go home and do something or at least have a voice,” said Deer. “I was in the Canadian forces, but the command told me right away, ‘you’re not going.’”

Deer pleaded to leave for his family’s sake, but was ordered to stay put in Germany.

“I went to talk to my commander and said, ‘hey. This is my family,’” said Deer. “He said, ‘as long as you’re in the military, it’s a political issue (and) we can’t authorize you to go home. You’re just going to stand down and do your job over here.’”

Deer was told if his wife and children wanted to return, they would have to pay their own way, as it was not going to be granted under emergency conditions.

A “buck sergeant” at the time, Deer could not afford the flight, so the family remained in Germany.

Being in Heidelberg gave Deer a unique view of the situation. The base was stationed near NATO headquarters, which meant the Canadian military was nearby along with other European nations.

“You get all kinds of weird notions, so I said, ‘if anything happens to my family, I’m going to go talk to at least a liaison at the Canadian forces,” he said. “I doubt that would have ever happened, but it was just an idea that popped in my head.”

World events changed the situation for Deer and everyone involved with the U.S. military including his cousin E4 specialist in the US Army Barry Deer.

Barry Deer was among the several Kahnawa’kehró:non sent to Iraq for the Gulf War, codenamed Operation Desert Shield, began when Iraqi president Saddam Hussein led the invasion and occupation of Kuwait August 2, 1990.

Being in the military, Barry knew he was required to focus on the job at hand, and could not worry about what was going on in Kahnawake.

“At the time, I wasn’t really thinking too much of what was happening in Kahnawake, albeit I was told by my mom what was going on during my deployment to Iraq,” said Barry. “It was something I wasn’t keep abreast of because I was on my own little thing, which was not so much of a little thing.”

Barry had an analogy that helped explain his situation, while deployed to the battle zone.

“I guess the closest analogy was a pitcher on the mound has to focus on a small little square and hit the corners of that square consistently hit the corners of that square,” he said. “You have to focus in on what your job is in the military and try to keep outside distractions, on the other side of the world that has to be pushed out. You have to be able to focus on your job and do your job as you were trained to.”

U.S. president George H.W. Bush declared a ceasefire February 28, 1991 ending the Persian Gulf War, and the final barricades in Kanesatake were removed at the end of September.

Barry returned to Kahnawake in 1992, as his military service entered and he worked to reintegrate himself into a community working to heal itself.

“It was sort of coming back to a place that had its own battle scars as it were and I didn’t have any part in what happened,” he said. “I was just trying to get on with my life, and trying to adapt to it.”

Ray Deer described it as being pulled in two directions during 1990, where he was trying to keep an eye on what was happening at home, while focusing on the military action that began soon after in the Middle East.

“It’s like being torn. ‘What’s going on at home? but now there’s the possibility that we’re going to war,’” said Ray. “You don’t know whether you’re going or staying back. You don’t have that option.”